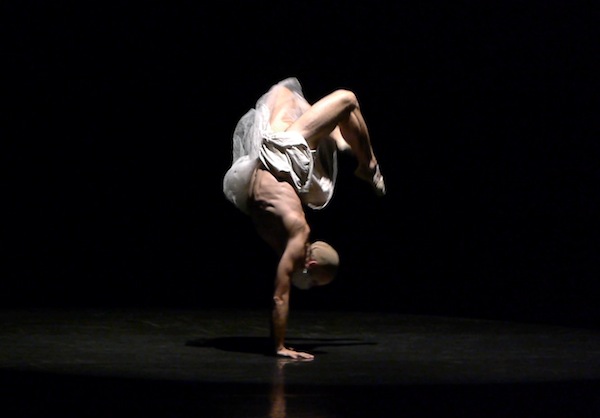 Ted Littlemore is one of seven dancers in the latest iteration of Idan Cohen’s Orfeo ed Euridice, which will be available online April 6-13. (photo by Flick Harrison)

The first article the Jewish Independent published about choreographer and opera director Idan Cohen was about his reimagining of Christoph Willibald Gluck’s opera Orfeo ed Euridice. Much progress has been made in the few years since, and excerpts from the contemporary dance work will be streaming on demand April 6-13.

Cohen was a relatively recent arrival from Israel back in 2018. As artistic director of Ne. Sans Opera and Dance, which he established here in 2017, he has become a prominent part of the Vancouver arts scene. He is currently artist-in-residence at the Dance Centre, which describes Cohen’s approach to this 18th-century opera as one that interprets

“Orpheus not as a god, but as an artist – a human who looks at the complex and sometimes violent history of Western, classical opera and dance with eyes wide open, the dancing body serving as a living example of human strength and fragility.”

In the myth, poet and musician Orfeo mourns the death of his wife, Euridice, and tries to get her back from the Underworld. It is an effort fraught with challenges, not unlike creating a new artistic work.

“Staging an opera is a monumental task, and it is really exciting to have an audience who has been following this production from its inception,” Cohen told the Independent. “Alongside the Dance Centre’s residency, we were given a grant from the Canada Council for the Arts, through the Piercey family – the Sheila Kathleen Piercey Fund – which enabled us to continue and present this final phase of the research, leading to the full production in 2022.

“For the past few months,” he said, “I have been rehearsing with Leslie Dala as the music director and with seven incredible dancers and five opera singers. We are presenting almost 40 minutes of a piano reduction of the score, played live by Leslie, and the singers, as a dance-opera. So you’ll get to see and listen to a live opera that is also a dance performance.”

In 2019, Ne. Sans presented Trionfi Amore, as a part of the research for Orfeo ed Euridice. That production featured Ted Littlemore, Kate Franklin and Jeremy O’Neill. For this April’s production, they are joined by dancers Hana Rutka, Rachel Meyer, Aiden Cass and Stephanie Cyr.

“The wonderful counter-tenor Shane Hanson is singing Orfeo and the chorus singers are Heather Pawsey, Tyler Simpson, Heather Molloy and William Grossman,” said Cohen. Costume designer and stylist is Evan Clayton, while Littlemore pulls double duty – not only performing, but in charge of the makeup and masks.

The number of people involved now brings its own challenges, given the continuing pandemic.

“The Dance Centre’s residency enabled us to rehearse in large spaces that allowed for our relatively big group to remain socially distanced at all times,” said Cohen. “Following COVID-19 protocols meant that we needed to be wearing masks and that the performers could not touch. I tried to look at these not as obstacles but as creative opportunities and I am very proud of what we’ve managed to achieve.”

Ever the one to look on the bright side of things, Cohen added, “It was wonderful to gather musicians and dancers and create. There’s nothing quite like it, and I hope that the result will be as pleasurable to our audience as it was to us.”

The April streaming, which will have been pre-recorded, includes a discussion with Cohen. Tickets are on a sliding scale, and can be purchased from thedancecentre.ca/event/idan-cohen.