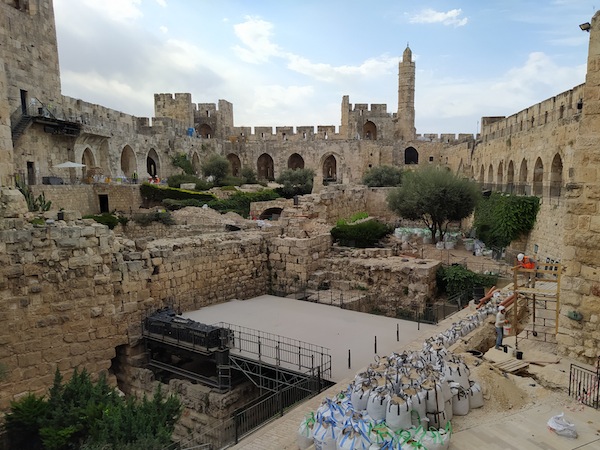 (photo from Tower of David Museum)

The Tower of David Museum has started one of the largest conservation projects in Israel, with work underway for a $40 million renewal plan led by the Clore Israel Foundation together with the support of the City of Jerusalem, the Ministry of Jerusalem and Heritage, and the Israel Ministry of Tourism. The Israel Antiquities Authority is supervising the archeological excavations and conservation of the project, which will double the current area of the museum to 20,000 square metres (more than 215,000 square feet). There will be a new sunken-entrance visitor centre, café, additional public bathrooms, as well as seven new galleries, additional exhibition spaces and two elevators, making the ancient citadel accessible to all. An educational complex of offices, classrooms and an auditorium will be constructed and a promenade added, which will be lined with archeological findings from the site.

Throughout the next two years, the museum will remain open (within the guidelines of the Ministry of Health), with temporary exhibitions, guided tours and cultural activities. A capital campaign has been initiated to complete the renewal project. At the same time, the museum continues to raise working capital to ensure that, even during the project and through the pandemic, the story of Jerusalem continues to be told. Last year, more than 500,000 people visited the museum, generating income for 80% of its budget, but the pandemic shutdown cut its income to zero, forcing the furlough of 85% of the working staff. Despite this, a small team is still creating live and virtual programming. In addition to fundraising, the museum has petitioned the government of Israel, including the Ministry of Culture, for support.

The Dome of the Rock in the snow, 1940s. (photo by Moshe (Nicolas) Schwartz / Schwartz Collection, Bitmuna)

Jerusalem is one of the most photographed places in the world. The Camera Man: Women and Men Photograph Jerusalem 1900-1950 exhibition at the Tower of David Museum highlights the unique and complex human and cultural heritage of the city. It also offers, for the first time, a comprehensive look at the photographic work in Jerusalem of Christians, Jews and Muslims between the years 1900 and 1950.

The 34 photographers chosen to be exhibited in The Camera Man lived and worked in Jerusalem during the first half of the 20th century. The photographers come from all different backgrounds – European, Armenian and local, Jewish, Muslim, Christian, men and women. Many photographers recorded the Jerusalem residents of different communities; some were hired by institutions and organizations to photograph various historical events that occurred in the city and some were artists who sought to honor the unique faces of Jerusalem.

What makes this exhibition different from others is that much of the photography that has been displayed before from this time period looks at the young “strong Zionist,” the developing state of Israel, the rural local villages, the posed “Orient,” the “new Tel Aviv.” This exhibition – which includes many photographs that have never been seen before – examines Jerusalem and its colorful mosaic of people, from everyday life to historic events.

“The juxtaposition of different viewpoints and spheres of activity, placing works by prominent photographers alongside less well-known names, reveals a hitherto untold chapter in the history of photography in the country and in Jerusalem’s own history,” writes exhibit curator Dr. Shimon Lev.

In the mid-19th century, when Europe began to take an interest in the Orient, Jerusalem witnessed an influx of travelers from England, France and, later, from America. At the same time, a new invention was spreading through Europe – the camera – and the newcomers carted their unwieldy photographic equipment with them. The sight of the squalid city was a bitter disappointment to them and clashed with an imagined idea of the Holy City that had prompted their journey to Jerusalem.

The dissonance between the Jerusalem cherished by the heart and the Jerusalem revealed to the eye, between the heavenly and the earthly Jerusalem, and between the ideal and the mundane Jerusalem, still occupies photographers today. Although cameras are now conveniently small and light and exposure times are shorter, today’s photographer still tries to capture his own personal version of Jerusalem, even if it is only a digital self-portrait in front of the Tower of David.

In The Camera Man, there are photographs showing action in the streets of Jerusalem from 1948, as well as portraits taken by local photographers who opened up their own photographic stores, most of them along Jaffa Road near Jaffa Gate and the Tower of David. The stores were called photographic houses or photo studios, although the driving spirit between the revival of the Hebrew language, Eliezer Ben-Yehuda (1858–1922), suggested the term ‘“light-painting houses” in Hebrew.

The photographs comprising The Camera Man were collected from private and public archives. The catalogue accompanying the exhibition includes selected photos from the exhibit, several of which are published for the first time, as well as articles by Lev, Dr. Lavi Shai and artist Meir Appelfeld.

The Camera Man is on display until Dec. 10. For more information, visit tod.org.il/en/exhibition/the-photographers.