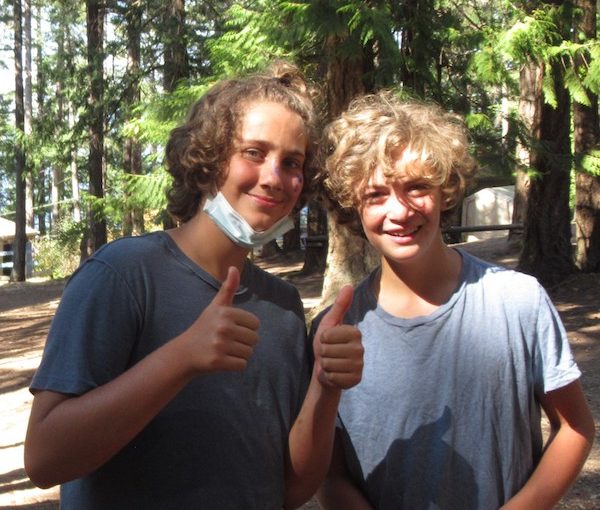 Camp Miriam offered both day and overnight camping experiences this past summer. (photo from Camp Miriam)

Camp Miriam is celebrating that, for the past two summers, its youth leadership has pulled out all the stops to provide programming for hundreds of campers despite the challenges of the pandemic.

“Coming into June of this year, we were all set to hold Kaytana [day camp] again in Vancouver and Victoria because at that time the provincial health restrictions did not allow overnight camp,” said Leah Levi, the camp’s registrar. “Then, in early June, the health orders changed and we learned that there was the potential to go back to our site on Gabriola Island.”

At that point, the camp – and especially its youth leaders who are responsible for everything from programming to logistics – had a decision to make. Would they continue with the plan they had been working on for months and hold six weeks of day camp, or would they try to quickly pivot and add overnight camp to the program?

“Honestly, if it had been up to the adults on the camp committee, I think we would have stuck with our original plan. The logistics of organizing overnight camp on Gabriola, with only a few weeks’ notice and at a campsite that had been empty for over a year was really overwhelming,” said committee chair Trilby Smith. “Camp needed to be cleaned from top to bottom, there were ferries to book, cooks, medics and lifeguards to hire, food to order and so, so many more details.”

But the young leaders knew that, as great as day camp is, overnight camp was what their campers needed after 18 months of pandemic living. However, they didn’t want to disappoint parents who had already planned for day camp. In the end, they voted to host two weeks of day camp in both Vancouver and Victoria – and three weeks of overnight camp on Gabriola.

The camp committee and many Miriam alumni supported the decision and volunteered hundreds of hours to help get the campsite in shape and assist in all kinds of other ways. In addition, Miriam’s donor community also rushed to help support Jewish camping in 2021.

In the end, 271 kids and 70 youth staff got to experience a COVID-free 73rd summer of “Miriam magic,” in a summer when the magic was needed possibly more than ever.

The effects of the pandemic on youth mental health have been well documented. The Canadian Mental Health Association notes, “Social isolation, removal from school and daily routines, as well as isolation and loss associated with illness are some of the top stressors children are facing.”

This fact was not lost on Miriam’s youth leaders, who reported that both campers and staff arrived at camp this past summer with greater mental health challenges than they had seen in previous years. However, they also saw that, after just 10 days of unplugged, in-person experiences in an inclusive environment, there was a noticeable change for the better in the mood of many campers.

“It was like someone released a pressure valve,” said camp director Marina Levy. “As the campers made friends, processed events going on in the world through our educational programming, and got to just be kids without the constant distraction from their phones and screens, we saw many of them settle and become less anxious.”

Parents noticed a change in their kids, too. One parent who responded to Miriam’s post-summer survey said, “My kid was soooooo excited that there was a sleepover camp this year. It felt like an oasis of near normality in an otherwise dystopian year. She came back so much more relaxed, with strong connections to the kids in their kvutzah [group].”

According to Project L’Chaim’s fall edition of Self-Care for Caregivers, it’s not surprising that camp would provide a balm to its campers and staff. Many of the suggestions offered by mental health experts in the booklet are embedded into Camp Miriam’s programming. For example, Miriam campers are immersed in nature and enjoy daily “forest showers” under the fir and cedar trees on the Gabriola site. They also receive a healthy dose of spirituality and mindfulness, especially through Shabbat and Havdalah traditions.

Finally, the experts say that feeling like you’re a part of something larger than yourself and forming meaningful social connections are keys to good mental health. Above all else, Camp Miriam prides itself on its focus on inclusion, community and tikkun olam – all of which contribute to many campers reporting that they have made lifelong friends at camp and that they feel more comfortable being themselves at Miriam than they do anywhere else in their lives.

Levy knows the respite of camp will not solve all the pandemic-related mental health challenges facing youth, but she believes it’s a start. “And, hopefully, next summer will be even more normal,” she said.

Apparently, many families are hoping the same. Miriam’s registration, which just opened last month, is already almost full. Anyone hoping to register their children for Camp Miriam’s 2022 session can get more details at campmiriam.org. To learn more about Miriam’s 2021 summer, the camp’s newly released annual report is also available on the website.