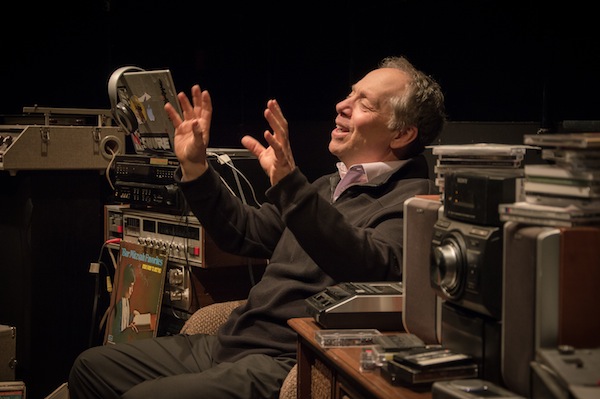 Brian Linds reminisces about his bar mitzvah in Reverberations, which is at Presentation House Theatre until March 17. (photo from Courtesy PHT)

“There are so many wonderful, heartfelt moments in the stories that are told,” Brian Linds told the Independent about Reverberations. “Some are sad. Some are funny. But these same moments have been shared by us all.”

Reverberations opened March 7 at Presentation House Theatre. Created by Linds, a sound designer and an actor, it is co-produced by the theatre and Reverberations Collective with Mortal Coil Performance. Based on Linds’ life, some of the moments he shares with the audience are “his parents’ love story, a childhood act of betrayal, his bar mitzvah, his mother’s Alzheimer’s diagnosis and a moment of lucidity his mother experienced while in the late stages of the disease.”

“The idea for Reverberations came to me after I had created a couple of 10-minute sound performance pieces for pre-events during the SPARK Festival at the Belfry Theatre in Victoria where I live,” said Linds. “I created stories using only sound. These sound performances would play in unusual spaces in and around the theatre.

“I was so pleased with the results that I created three more mini shows and I came up with the concept of Reverberations as a full 90-minute show, using five spaces and four actors who interact with the soundscapes. The production premièred in 2017 as a main stage production of the SPARK Festival.”

The audience, divided into smaller groups of 20, also moves through the five performance spaces. About the première, which took place at Belfry Theatre, Lind remarks in the Vancouver show’s press material that “audiences enjoyed the novelty of moving from space to space and loved the idea that each group’s journey was a unique unfolding of the story told. They were also inspired to share with the performers and audience members their own experiences of loss, betrayal and love. It was deeply touching for our team to experience.”

It was the “immersive, personal and celebratory” experience that attracted Presentation House artistic director Kim Selody to Reverberations. “His creation honours the life of his mother, and what it feels like to lose someone to Alzheimer’s disease,” notes Selody. “Having lost my own mother in the same way, I was deeply touched by how Brian approached his experiences. His choice to end with a celebration is a touch of genius.”

During the writing process, Linds himself had revelations about aspects of his life.

“While I was creating a segment for Reverberations about my bar mitzvah,” he shared, “I found myself thinking about what it means for me to be Jewish. I discovered that who I am was formed and shaped because I was born Jewish. I like being Jewish. I’m a part of something pretty special. Come see the play and you will see.”

Some people will also want to come to the show for a touch of nostalgia, as Reverberations features a range of sound technology, from digital recordings to LPs and cassettes, reel-to-reel and 8-track tapes.

Linds came into sound design kind of by accident.

“I had been working as a professional actor for 25 years but, one day during a show, I was backstage with an actor who knew of my love of music and he asked me to design the sound for his play. It came very naturally to me and I haven’t stopped for 15 years,” he said.

“My favourite part of working on sound is that it gives me a chance to be on the other side of the footlights and work with directors in a completely different way. I love working with directors who collaborate and show me new ways to use my talent.”

Reverberations runs until March 17 and tickets start at $15. For more information, visit phtheatre.org/event/reverberations or call 604-990-3474.