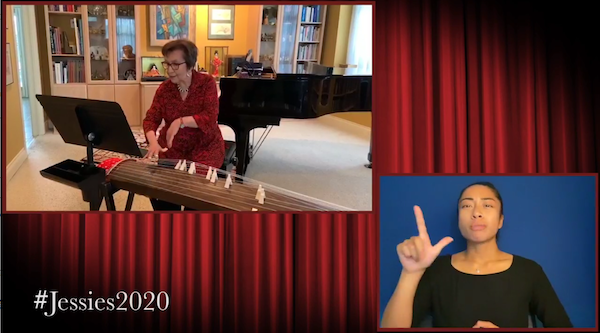 On June 29, the 38th annual Jessie Awards were celebrated virtually, with several Jewish community members among those being honoured.

“Like most middle-class Jewish kids growing up in postwar New York City, I went to Broadway shows with my parents every few weeks,” she said. “I dreamed of conducting the pit orchestra and conducted many records in my living room on a regular basis.

“My first role was in Peter Pan – as Tinker Bell. I was 6 years old and three feet tall!

“I music-directed my first show – South Pacific – when I was 13, for a day camp in Tarrytown. I was given a script – no score – so I played it all by ear … in the preferred key for each of the teenage actors.

“Later, I went to a musical theatre training program in upstate New York, where I played scenes opposite a young man – named Stephen Schwartz.”

Bross Stuart did her graduate work in ethnomusicology, with a focus on Coast Salish music; research that was published, as was her later research on Northern Haida songs. She and her family lived in Japan for many years, where she continued studying traditional music for Japanese koto and shamisen, earning an advanced teaching licence.

“I’ve arranged and accompanied many Yiddish songs for voice and piano, producing four CDs with Claire Klein Osipov,” she said. “I’ve even arranged some Yiddish songs for koto and voice,” she added, noting “Yiddish was the language of my grandparents.”

“I love arranging and conducting choral music: 20 of my pieces have been published in the U.S. and Canada; most recently, an arrangement of my daughter Jessica’s composition,” she continued.

“For the last 15 years, we have co-produced and music-directed the annual Holocaust Commemorative Evening for the Vancouver Holocaust Education Centre.

“In theatre, I have thoroughly enjoyed working with you. Where? At Theatre Under the Stars, the Arts Club, the Electric Company, Touchstone Theatre, Famous Artists, Blackbird Theatre, Snapshots Collective, Presentation House, the Chutzpah! Festival and 25 years at Perry Ehrlich’s Gotta Sing! Gotta Dance!

“My husband Ron Stuart – anthropologist and filmmaker – has been with me on this journey. Our most recent collaboration is our film company: Cultural Odyssey Films. All eight of our most recent films were shot on location in South Africa over the last 10 years.

“Thank you very much for this special honour. I look forward to working with you in the near future!”