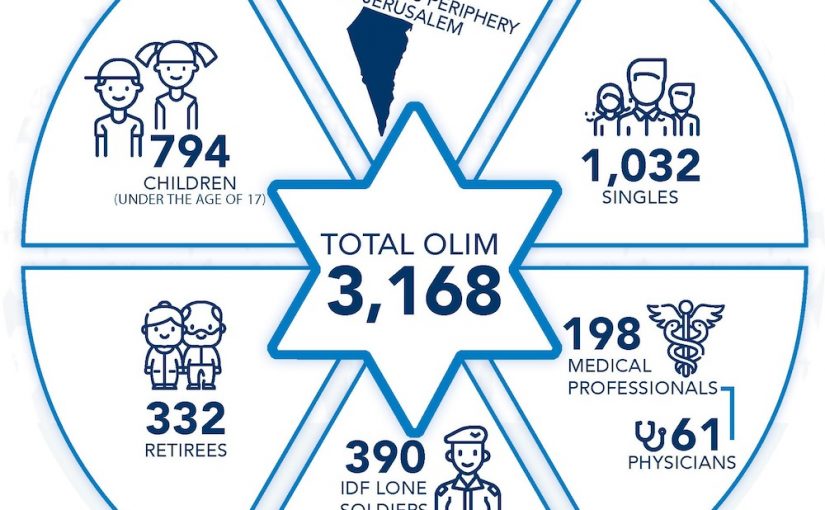 Despite a challenging and tumultuous 2020, 291 individuals from Canada decided to make aliyah and move to Israel with Nefesh B’Nefesh (NBN) over the past year. The Canadians were among the 3,168 individuals who moved to Israel from North America in 2020 – 2,625 since the COVID-19 pandemic hit.

Founded in 2002, Nefesh B’Nefesh, in partnership with Israel’s Ministry of Aliyah and Integration, the Jewish Agency for Israel, Keren Kayemeth LeIsrael and Jewish National Fund-USA, has assisted in easing the aliyah process for more than 65,000 olim since its inception. With the help of its partners, NBN assisted nearly 90% of the total number of olim that arrived in 2019.

Since January of 2020, Nefesh B’Nefesh olim have most often hailed from New York, New Jersey, California, Florida, Ontario, Illinois, Massachusetts, Maryland, Pennsylvania and Texas. Altogether in the past year, 811 families chose to move their lives to Israel, along with 1,032 singles and 332 retirees. There were 61 physicians among a total of 198 medical professionals who arrived in Israel in the last year, most of whom joined the frontlines in Israel’s fight against the coronavirus. And 390 young men and women stepped off the plane with the desire to serve Israel as lone soldiers.

“From the earliest days of the Jewish state, no matter how trying or difficult the circumstances, aliyah has always continued in order to preserve what was once a distant dream for our parents and grandparents,” said Rabbi Yehoshua Fass, NBN co-founder and executive director. “As we look back at the challenges everyone faced in 2020, we are extremely proud of what we have accomplished together. We look forward to watching each oleh grow and build their new lives in Israel, and eagerly look ahead to 2021, a year with the potential to exceed all expectations in aliyah.”

“I welcome the dozens of new olim who chose to leave everything, especially during the time of a global epidemic, and fulfil their dreams of building new homes for themselves in Israel,” said Minister of Aliyah and Integration Pnina Tamano-Shata. “Many will surely remember 2020 as a challenging and complex year, but the olim who arrived [recently] from across the U.S. and are part of the last group of olim this year, are enabling it to be shaded in more encouraging and optimistic colours.

“Despite COVID-19, the Jewish nation is thriving and aliyah is continuing,” Tamano-Shata continued. “In the past year, more than 20,000 olim from 80 countries around the world made aliyah.”

“The thousands of new olim from North America and around the world, during a year of a global pandemic, lockdowns and almost complete paralysis of international air travel, emphasizes how much the longing for Zion is deeply ingrained in the hearts of the Jewish people around the world,” said Isaac Herzog, chair of the Jewish Agency.

The top 10 cities in Israel that new olim chose as their homes this year were Jerusalem, Tel Aviv, Beit Shemesh, Ra’anana, Haifa, Herzliya, Netanya, Modiin and Be’er Sheva. The olim most commonly worked as educators, physicians, nurses, social workers and lawyers, as well as in the fields of marketing, sales and business. The average age of an oleh this year is 30, with the oldest being a 97-year-old and the youngest being only 35 days old.

When the pandemic began in earnest in March 2020, Nefesh B’Nefesh adapted its various programming and transitioned into holding virtual meetings, webinars and informational sessions. The online seminars have allowed the organization to reach a much wider audience and have included a wide range of subjects, from choosing communities and special webinars for medical professionals, to how to pack and ship for aliyah.

The ongoing support after aliyah provided by NBN has meant that 90% of its olim have remained in Israel, leading to tens of thousands of new Israelis who go on to make significant contributions to the country.