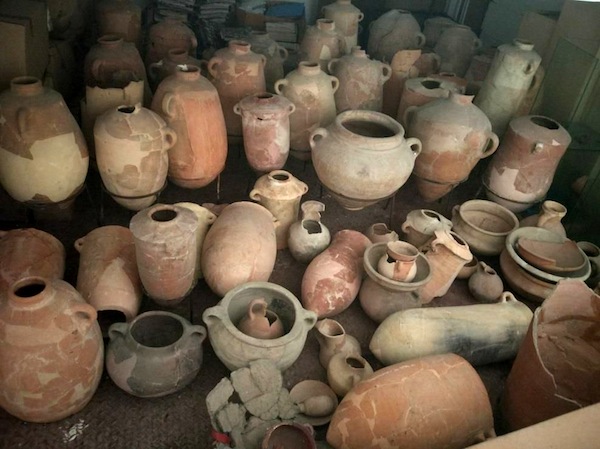 “Until now, there has not been any meaningful direct archeological evidence of workshops for the production of purple-coloured textiles from the Iron Age – the biblical period – not even in Tyre and Sidon [in Lebanon], which were the main Phoenician centres for the manufacture of purple dye. If we have identified our findings correctly, Tel Shikmona, on the Carmel Coast [in Israel], has just become one of the most unique archeological sites in the region,” explained Prof. Ayelet Gilboa and PhD candidate Golan Shalvi from the University of Haifa, who are studying finds that have been guarded in various storerooms in Haifa since the 1960s and ’70s.

Tel Shikmona is known mainly for its surrounding Byzantine settlement, including some splendid mosaics. The Iron Age settlement dates to the 11th to 6th centuries BCE, corresponding in biblical terms to the period of the judges, the United Monarchy (Saul, David and Solomon), the kingdoms of Israel and Judah and the Assyrian/Babylonian epoch. It occupies about five dunams (a bit more than one acre) out of the 100-dunam site of the Byzantine city at its peak. A section of the tel was excavated between 1963 and 1977 by Dr. Yosef Elgavis on behalf of the Haifa Museum, with the active support of then-Haifa mayor Abba Hushi. The site was known by archeologists and experts to have yielded rich material findings; for various reasons, however, these have never been published in a comprehensive manner.

The wealth of findings is associated with the Phoenician culture, including an unusual number of vessels imported from overseas, and it is the largest collection of ceramic vats found anywhere in the world from the first millennium BCE that still preserve purple colouring (made from the glands of murex snails). “Rather than being considered a region of secondary importance in this period, the Carmel Coast can now gain its rightful place as one of the most important production areas of the dye in ancient times in general, and during the biblical period in particular,” concluded the researchers.

The Shikmona project is being undertaken under the auspices of the Zinman Institute of Archeology at the University of Haifa, with the support of the Israel Antiquities Authority and the National Maritime Museum in Haifa, where some of the findings are displayed.