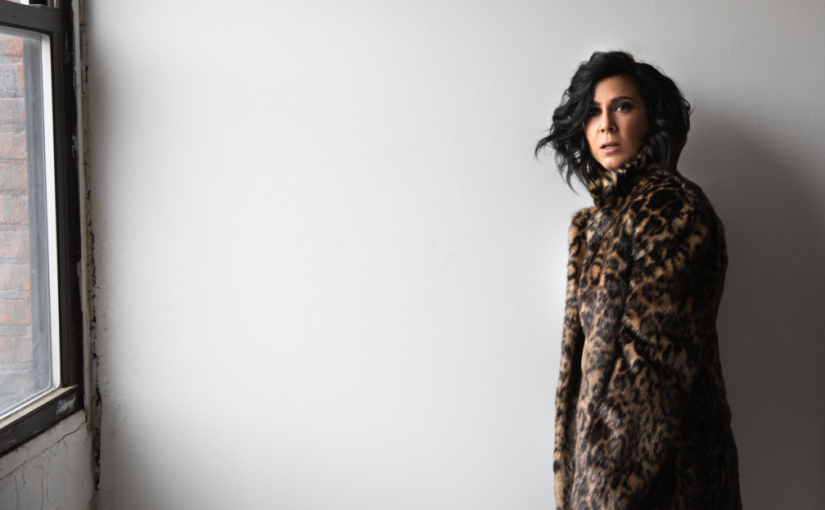 Writer and comedian Iris Bahr performs at the Rothstein Theatre on Nov. 12 and 13, as part of the Chutzpah! Festival. (photo by Gail Hadini)

Award-winning writer, actor, director and producer Iris Bahr delves into serious issues using humour – and by being someone other than herself. She will bring some of her many characters to the Rothstein Theatre stage Nov. 12 and 13 as part of the Chutzpah! Festival.

Bahr hosts the weekly podcast X-RAE, as alter ego Rae Lynn Caspar White. In her one-woman show DAI (enough), she portrays 11 different characters in a Tel Aviv coffee shop. In her comedy series Svetlana, which ran for a couple of seasons, she starred as the Russian prostitute and political consultant. These are but a few examples of the personas she has created.

“I think I was about 6 years old,” Bahr told the Independent about when she did her first impression. “My family went on a trip to Italy and I began to imitate the tour guide, who kept going on and on in a heavy Italian accent about ‘marble from Carrera’ and so, for years after that, I would always be asked to ‘perform my Italian woman’ when my parents had company over.”

Using the example of the character of Rae Lynn, Bahr explained how an alter ego allows for a better conversation.

“I host my X-RAE podcast in character because I find it puts people at ease and they open up about topics they wouldn’t otherwise,” she said. “Rae Lynn flips from highbrow to lowbrow in a heartbeat and talks openly and outrageously about parenting, marriage and various R-rated topics. During my interview with Lawrence O’Donnell, for example, we veered from Marxism to Penn Gillette’s sex parties in a single breath.”

“I think I gravitated towards neuroscience because the inner workings of the brain fascinate me and I’m equal parts cerebral and highly emotional, and so that translates into all my work,” she explained. “I have a splintered identity, but not in a 50-50 kind of way – I actually feel 100% American and 100% Israeli at all times and that feeling of connection yet constant alienation lends itself to me inhabiting different characters and being able to truly commit to different viewpoints.”

Bahr was born and raised in the Bronx but moved to Israel as a teenager, staying there through military service; she still has family there. Her latest satire, The Olive Tree, about the Israeli-Palestinian conflict, recently had a soldout reading in New York and is set to open in spring of next year. DAI came to the stage in 2006 and audiences have included the United Nations, in 2007.

“I was invited to perform the show for over 100 ambassadors and delegates and the experience was unforgettable,” she said. “They were highly attentive and laughed at all the right moments, which I was not sure was going to happen. I felt like a diplomat for a day.”

Bahr said she wrote DAI “to communicate the intricacy and complexity of life in Israel, the inner conflicts prevalent in Israeli society, and how they are affected by living under constant threat of suicide bombings/sudden death, which, as any Israeli will tell you, instil not a feeling of helplessness but a vibrancy and love for life. On the flip side, is how that very fact is perceived by visiting outsiders and Palestinians affected by the conflict. The characters we meet in the café – from all walks of life, ideological spectrums and backgrounds – have no idea their lives will be ending abruptly [by a suicide bomber] and so their monologues range from outrageously humourous, vengeful, disillusioned and more.”

She first performed DAI at Baruch College in New York City, “as part of a festival sponsored by the Culture Project,” she said. “I had no idea it would get picked up immediately for a commercial run, and so that was a phenomenal development.

“A lot has changed since I first wrote DAI, in terms of how the conflict is manifesting itself on both sides, and yet the situation has sadly stayed the same. Thankfully, suicide bombings seem to be a thing of the past, but my dear childhood friend and father of four was stabbed to death only last year while out shopping, the Palestinian plight has not improved and the political climate is worse than ever. Nevertheless, the characters in DAI have sustained their relevancy; my German character talks about rising antisemitism in modern-day Germany, for example; my Israeli former military man talks of his son who doesn’t want to serve in the military; and the snooty ex-pat woman who lives in New York City, well, those types of women only seem to multiply by the minute.”

She stressed, “The play is not a polemic – it is a collection of social observations that speak from many different viewpoints. The piece aims to entertain, offer a visceral theatrical experience and, hopefully, also illuminate and enlighten. Thankfully, it has been warmly received amongst extremely ‘pro-Israel’ audiences and also ‘pro-Palestinian’-leaning crowds both in Europe and here in America. Of course, certain right-wingers think it’s too leftist and left-wingers think it’s too right, which is all I could really hope for as a piece about humanity.”

For tickets to see Bahr perform at Chutzpah!, and for more festival offerings, visit chutzpahfestival.com.