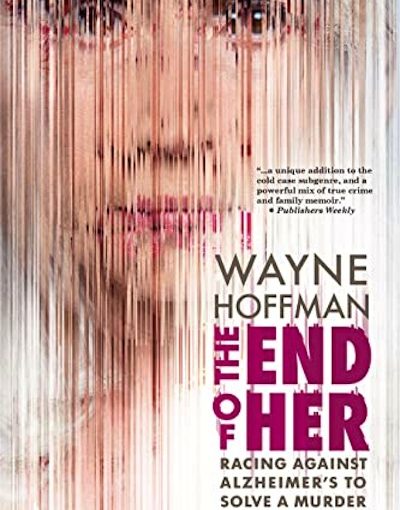 Wayne Hoffman’s latest book is about his efforts to solve the 1913 murder of his great-grandmother before his mother’s dementia takes full hold of her mind.

Well into his book The End of Her: Racing Against Alzheimer’s to Solve a Murder, Wayne Hoffman notes that it wasn’t until his mother was admitted into a nursing home that he began to read books and watch films about the disease, finding comfort in other people’s stories.

Hoffman’s nonfiction account of his mother’s decline – and his search for his maternal great-grandmother’s killer – was released this past February by Heliotrope Books. Perhaps coincidentally, I only cracked its proverbial spine (I have an electronic copy) a couple of weekends ago, the same weekend my father moved into a retirement home.

I was drawn to The End of Her both as the daughter of a parent with dementia and as a former Winnipegger. It was indeed comforting to read about how Hoffman’s family dealt with his mother’s dementia, how her dementia presented itself and how difficult the medical system was to navigate. There were many commonalities with my family’s experience, despite this part of Hoffman’s story taking place in the United States. Originally from Maryland and now living in New York, Hoffman is executive editor of the Jewish online magazine Tablet. He is a journalist, who also has published three novels, which almost guaranteed the The End of Her would be a compelling read.

Admittedly, I did not follow all the connections between Hoffman’s relatives across generations, nor find that part so interesting. But I did understand how Hoffman discovered more family during his research than he knew he had, and that this was a silver lining, though it could never compensate for the lost relationship with his mother.

Hoffman’s mother loved to tell stories and one of the more intriguing ones was of how her maternal grandmother, who had lived in Winnipeg, had been shot by a sniper while sitting on her porch nursing her new baby. Never believing the story, Hoffman kept his thoughts to himself until a video he made at Passover in 2010 revealed that his mother’s memory was failing. He thought about how the Passover story is handed down through generations, and how his family’s stories also become a part of history. He decided to challenge his mother’s – and his aunt’s – narrative about the 1913 murder of their grandmother, Sarah Fainstein. And his mother returned the challenge – asking him to tell her, then, what had happened.

Over the next 10 years or so, Hoffman searched, in fits and starts, for the true story of his great-grandmother’s death, finally finding information when he searches for Feinstein instead of Fainstein. The death certificate notes that it was, indeed, homicide. The amount of information Hoffman is able to piece together from a wide variety of sources, including conflicting newspaper reports and official documents, is impressive. He figures out the mystery to his satisfaction, but its veracity is unlikely to ever be known.

Unfortunately, by the time he reaches his conclusion, his mother’s dementia is to the point where she cannot absorb it. The photos and stories that his mother shared with him throughout his life are now his responsibility. A responsibility he takes seriously.