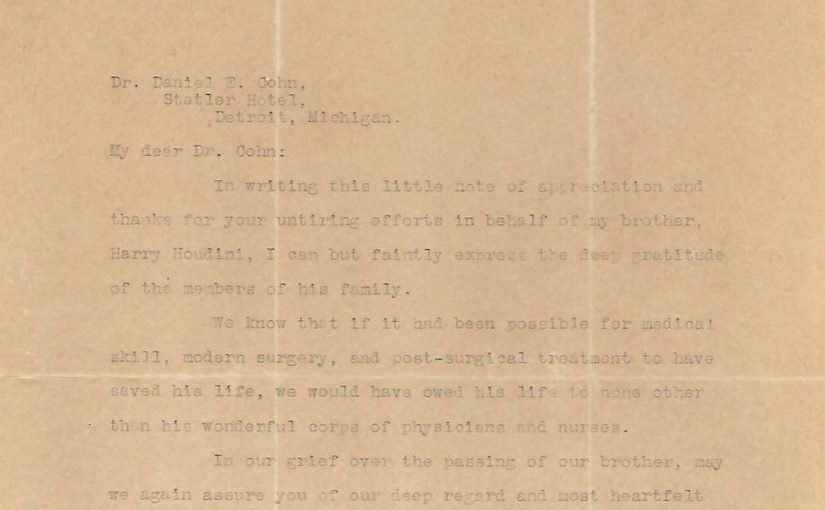 Did you know there’s a Harry Houdini connection to Vancouver’s Jewish community? My late husband was Theodore (Ted) Cohn, emeritus professor of political science at Simon Fraser University. Ted’s father, Dr. Daniel E. Cohn, was Houdini’s doctor at the time of the escape artist’s death in Detroit on Oct. 31, 1926 (Halloween).

After Ted’s mother, Ethel Schatz, died in 2012, we acquired papers related to Cohn’s care for Houdini. Cohn was just 25 years old, starting his medical practice. He was the substitute doctor for the Statler Hotel at the time of Houdini’s Detroit tour.

Prior to his Detroit performance, on Oct. 22, Houdini had been punched unexpectedly in Montreal by a McGill student, J. Gordon Whitehead. Whitehead was testing Houdini’s ability to withstand abdominal blows. Without advance notice, however, Houdini was unable to prepare his muscles, and his appendix was ruptured. Nevertheless, he and his wife Bess traveled to Detroit, where he performed at the Garrick Theatre on Oct. 24. He collapsed after the show.

Houdini reluctantly went to Grace Hospital after being examined by Dr. Cohn. His surgeon, Dr. Charles S. Kennedy, operated and discovered the now-gangrenous appendix. With no cure in sight, Houdini remained hospitalized. Specialists were consulted, to no avail.

Cohn was able to spend time at Houdini’s bedside, getting to know him and even bringing him “Farmer’s Chop Suey,” a sour cream-raw vegetable dish Houdini requested. The two ate this Jewish specialty together.

A thank you letter to Cohn from Houdini’s brother, Theodore Hardeen, and other original documents are now in the Houdiniana Collection at the New York Public Library for the Performing Arts. These include Dr. Cohn’s notes related to Houdini’s medical care and death, and insurance and legal letters related to Cohn’s payment. I wanted these valuable items to have a better home than our personal archival-quality folders, and approached the specialty library, where these papers will be available to researchers.

Houdini’s father, Rabbi Mayer Samuel Weiss, moved to Appleton, Wisc., in 1878, to be the first rabbi at Zion Congregation. Houdini, known then as Erich Weiss, was 4 years old. Houdini is buried in Machpelah Cemetery, Queens, N.Y.