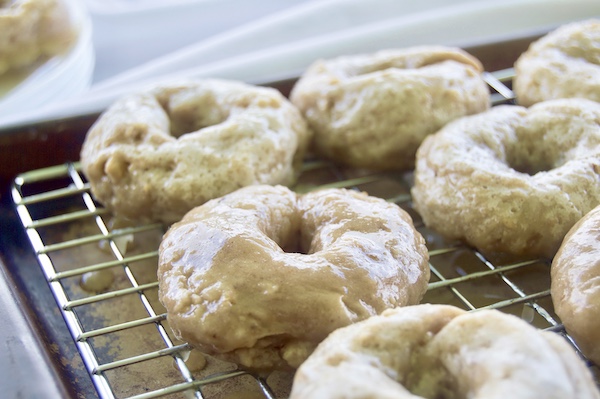 There are so many flavors of sufganiyot to be found in Jerusalem around this time of year. (photo by Barry A. Kaplan)

From Israel have come two popular foods for Chanukah: sufganiyot (doughnuts, often filled with jelly) and ponchikot, which are ball-shaped, resembling a doughnut hole.

Gil Marks, in The World of Jewish Desserts, writes that doughnuts fried in oil, ponchikot, were adopted by Polish Jews for Chanukah. The name is taken from the Polish paczki (pronounced poon-chkey), which led to the nickname ponchiks, the Polish name for jelly doughnuts. Paczki are similar to jelly doughnuts, only larger, more dense and more rich, and are traditionally served on Shrove Tuesday, the day before Ash Wednesday, which marks the beginning of Lent. Paczki were made to quickly use up stores of shortening and eggs, which were prohibited during Lent.

Sufganiyot also have interesting history. Some say sufganiyah, which in Hebrew means sponge-like, is reminiscent of the sweet, spongy cookie popular along the Mediterranean since the time of the Maccabees. Hebrew dictionaries say the word comes from the Greek sufgan, meaning puffed and fried.

In The Jewish Holiday Kitchen, Joan Nathan, an acquaintance of mine from our Jerusalem days and noted cookbook author and maven of American Jewish cooking, said she learned a fanciful fable about the origins of sufganiyot from Dov Noy, an Israeli folklorist. Noy relates a Bukhharan fable in which the first sufganiyah was given to Adam and Eve as compensation for their expulsion from the Garden of Eden. The word sufganiyah, he writes, comes from the word sof meaning end, while gan means garden and Y-ah is G-d. Thus, sufganiyah means the end of G-d’s garden. Noy clarifies that clearly this fable was created at the beginning of the 20th century, since sufganiyah is a spoken Hebrew word coined by pioneers.

These can be made three months ahead and frozen after cooled. To use, defrost, cover with foil, reheat in 350°F oven 15 minutes, dip in sugar syrup and either roll in sugar or inject with jelly.