More than 80 volunteers came together to help Jewish Family Services sort the food on Sept. 26, organizing nearly 1,300 bags of food and toiletries. (photos from facebook.com/JFSVancouver) 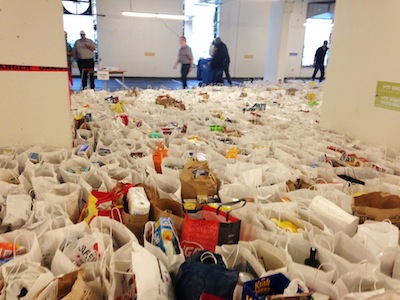 More than 80 volunteers came together to help Jewish Family Services sort the food on Sept. 26, helping unload, box and organize nearly 1,300 bags of food and toiletries. The collection is a huge effort and JFS could not have done it without all of its partners across the Jewish community, as well as the countless individuals who donated and volunteered, and Vancouver Talmud Torah and Congregation Beth Israel who offered the use of their facilities.

The number of those who rely on the Jewish Food Bank continues to rise. JFS’s services also include home delivery to seniors and people with disabilities, and the recently launched Jewish Food Link program extends the agency’s reach to serve people in the Tri-Cities and Richmond areas.

Project Isaiah is the annual High Holy Day food drive that assists those members of the community who are in need. All donations go directly to the Jewish Food Bank to assist individuals in the community – seniors, families and newcomers.

Sponsored by Jewish Family Service Agency and Jewish Women International-British Columbia, Project Isaiah is inspired by Isaiah 58:7: “… share your bread with the hungry.”

The Jewish Food Bank’s 2013-14 report, released last week, notes that the situation of the Jewish community mirrors that of the larger community, wherein most people living on fixed incomes or earning minimum wage in British Columbia spend 60 percent of their income or higher on housing, leaving 40 percent or less to cover utilities, medication and clothing, as well as food. With the rapidly growing cost of living, and lower economy, more families are having to access food banks for help:

• 12 percent of B.C. residents are unable to meet basic needs and do not have access to adequately nutritious food in sufficient amounts.

• For the past eight years, British Columbia has been ranked as the highest province in Canada for children living in poverty.

• Food bank usage is at an all-time high.

• 7.7 percent of B.C. residents are considered “food insecure” and go without or on reduced food intake.

All of the households served live at or below the poverty line and 80 percent of all households spend at least 60 percent of their income on rent. All clients are assessed and authorized by a JFSA caseworker. Currently, the food bank helps 55 children and teenagers, 248 adults and 91 senior adults.

Annually, more than 45 volunteers provide operational support to the food bank. The volunteers do the ordering, pick up donated goods, set up, as well as deliver to more than 50 homebound clients. With additional volunteers for its annual food drives, Project Isaiah, and the newly established Project Sustenance in the spring, volunteers contribute close to 3,500 hours of support.

The food bank is fully funded through the generosity of JFSA donors, the fundraising efforts and donors of JWI-BC, gift-in-kind donations of food through various food drive events, such as Project Isaiah and Project Sustenance, and ongoing donations collected by community partners. This past year, it had an operating budget of $149,200, with in-kind donations of food making up a value of $30,000 of the annual budget.

Close to 40 community partners provide ongoing food donations, supplies and space to support the Jewish Food Bank. These partners help lower the cost of operations and play a critical role.

This year’s Project Isaiah is underway, and the food bank is hoping that you will consider sharing your bread with the hungry (now and throughout the year). Take a bag home from a local synagogue or Jewish day school and return it, filled with food. A suggested shopping list includes high-nutrition items such as canned fish (tuna/salmon/sardines), peanut butter (plastic bottles only), canned fruit, canned vegetables, cooking oil (plastic bottles only), whole grain pasta/rice/cereals, legumes (canned or dried), dried fruit (prunes/apricots) and toiletries (includes children’s diapers). Note: check the “best before date” on products, as expired products cannot be accepted.

If you are unable to contribute food, JFSA and JWI-BC gratefully accept monetary donations (and issue a tax receipt).

On Sunday, June 1, from 1-4 p.m., the Jewish Community Centre of Greater Vancouver will be the site of Project Sustenance, a major food drive in support of the Jewish Food Bank. Community members, who are encouraged to bring non-perishable food items to donate, will be treated to live entertainment, a kosher barbecue and a kids-oriented crafts table hosted by Vancouver Talmud Torah. The drive is organized in partnership between the Jewish Family Service Agency (JFSA), Beth Tikvah Synagogue, Jewish Women International (JWI) and the JCCGV.

The idea for the drive came from Beth Tikvah’s Francie Steen and Shelley Ail, who is the lead food bank volunteer, said Debbie Rootman, community developer and program coordinator for the Jewish Food Bank. Steen and Ail are event co-chairs.

This is the first year of Project Sustenance, but JFSA “hopes to have it annually, because hunger is 365 days a year,” Rootman told the Independent. In an average month, she said, the Jewish Food Bank provides meals for 250 people, 65 of whom are children. “On top of helping so many people in the community,” Rootman said, “on special times of the year, like Passover and Rosh Hashanah, we distribute hampers to another 170 clients of Jewish Family Service Agency.”

Project Sustenance is meant to be the second food drive of the year for the Jewish Food Bank, which organizes Project Isaiah each High Holiday season with the help of local synagogues. Rootman and her colleagues had “always talked about doing another one in the spring, but haven’t had the time or volunteer power to do it,” she said. In fact, by about January every year, the food bank has usually run out of the goods donated in the fall. Typically, after January, the food bank has had to largely rely on cash donations, “so that way we can buy food, which we do bi-weekly for fresh vegetables and fresh bread and other things that we need,” she added.

“It was started as a temporary measure, but we’ve still got it today. So, it has grown. Many of the reasons [for that growth] are because Vancouver is very expensive, so some of the people we see are working poor … disabled people, elderly people, people on fixed incomes we are helping, as well as people going through tough times … everybody has challenges in their life, so we are here to help for those times.”

The Jewish Food Bank “was started 33 years ago by two women,” Rootman said. “It was started as a temporary measure, but we’ve still got it today. So, it has grown. Many of the reasons [for that growth] are because Vancouver is very expensive, so some of the people we see are working poor … disabled people, elderly people, people on fixed incomes we are helping, as well as people going through tough times.” She added, “everybody has challenges in their life, so we are here to help for those times.” Her personal philosophy, she said, is that “charity begins at home.”

The Jewish Food Bank operates out of the Peretz Centre for Secular Jewish Culture every other Thursday and is organized and staffed by volunteers. Elaborating on the scope and value of those contributions, Rootman said, “The Jewish Food Bank could not operate without the many volunteers.” She said there is always a need for volunteers to drive goods to clients who lack mobility, to organize food at the bi-weekly food banks and to sort Project Isaiah food donations in the fall. Right now, they are hoping that more volunteers will step forward to help with “set up and take down on June 1, as well as sorting” the donations.

The Jewish Food Bank is a community-wide effort, and Project Sustenance is no different. Aside from Steen and Ail, JWI’s Sara Ciacci has been involved in Project Sustenance through “major fundraising for the Jewish Food Bank,” said Rootman, and the JCCGV has donated the space for the June 1 drive. Some of the other major sponsors include Broadway Moving, which has donated a truck to transport the donated food, Omnitsky’s Kosher, which is providing kosher hot dogs, and Signarama Richmond.

Project Sustenance follows Beth Tikvah Synagogue’s presentation of A Place at the Table, a film that screened on May 13 to raise awareness about hunger in the community. The documentary explores the various issues surrounding hunger and the means to solving this serious problem. The screening was followed by a panel discussion, which included Rootman, who said she found the film to be “very powerful,” and Alex Nixon from the Richmond Food Bank. The panelists connected the information in A Place at the Table to Canada and the local Jewish community.

For those who are unable to attend on June 1, “food donations can be dropped off at any synagogue, Jewish school, the JFSA office or the JCC,” Rootman said. Community members can also make a cash or credit card donation by calling JFSA at 604-257-5151.