It takes a brave, confident person to lay themselves bare before others, to openly analyze their choices in life and share what makes them happy, sad and concerned. In the essay collection Hero in My Own Eyes: Tripping a Life Fantastic, local writer Max Roytenberg – with whom Jewish Independent readers should be familiar – is at turns funny, wistful, belligerent, humble, egotistical and sentimental. He’s everything we all are. In reading his stories, we learn about ourselves, as well. 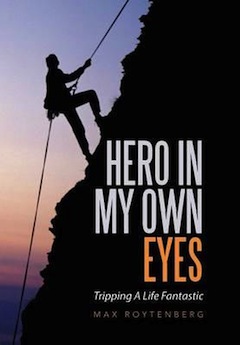 The collection is divided into three parts – “Looking Back,” “Living the Life” and “Looking Forward.” In the first section, Roytenberg recounts stories from his childhood in Winnipeg, outlines the various jobs he had during his career and the cities in which he lived, and touches upon his first two marriages and some of their challenges. It ends with “The Kiss,” about how he – a widower in his early 70s by that time – finally managed to connect with the woman he had loved since his youth; she had long been an widow, too, and was about the same age. The second section is focused on their life together, and it is obvious from his writing that he is smitten and he is happy. While still upbeat and energetic in the third section, the pressure of time is ever-present, as he is now an octogenarian, and he is contemplating who he has become, what impact he has made in the world and how he should spend the rest of his life.

Roytenberg seems to be quite a character. He often refers to himself in the third person, as Maxie, and calls his wife Cookie, my Bride, rather than by her name. There are times when you want to pat him on the back – such as when he manages to push through a regulation change that was being held up by an official who may have been corrupt – and times when you want to shake him, such as when he is basically dismissive of a 28-year-long marriage. But then you want to hug him, because he stayed with and supported his second wife, Ruth, during her eight-year fight with cancer, and you want to jump for joy when he does make the move on his lifelong love, Cookie, and she says yes. By the third section, when he’s so honestly discussing whether he lived up to his own expectations, about winding down (though he also talks about the benefits of not having the time to dilly dally anymore), his children and grandchildren, his gratitude and what he might do tomorrow, it’s quite moving. He touches universal chords in many of his musings and, by the end of the book, you may or may not consider him a hero, but you’ll thank him for sharing a bit of himself with you. And maybe that bit will help you to see the hero in you.