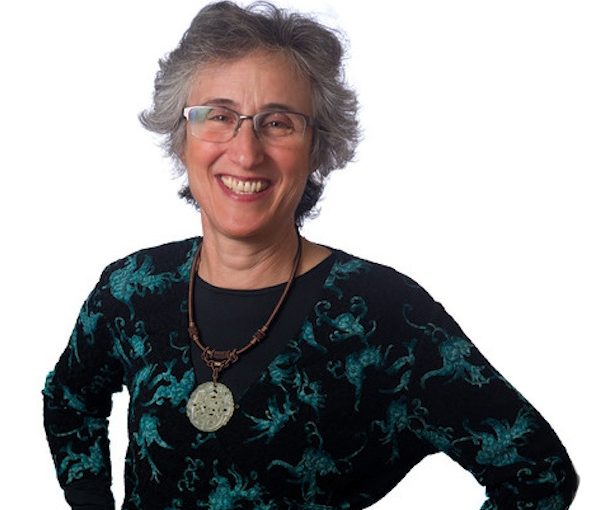 “We humans are a storytelling species,” Litman told the Zoom audience. “That’s what we do. Whether it’s the conversations we have with each other about what’s going on in our lives or the stories we tell ourselves in our own minds, whether they’re true or false, we are always doing this.

“And we Jews are a storytelling people,” she said. “This is what we do, too. If you look at our core text, it is full of stories. The first two Books of Moses are full of stories.”

Litman’s path towards being a maggidah began as her children grew older and she rejoined the workforce. At the time, she started to become ba’al teshuvah (a secular person who “returns” to Judaism). Based in Victoria, she attended conferences run by the Mussar Institute, which was founded by Vancouverite Alan Morinis, and, ultimately, located a program that trains maggidim.

In the mid-2000s, Litman connected with maggid Yitzhak Buxbaum, a student of Rabbi Shlomo Carlebach, in Brooklyn, and she embarked on a two-year program that was taught via conference calls and semi-annual workshops. Upon completing the program in 2008, Buxbaum said to her, “Shoshana, I see how good you are. Now go, save our people.”

Litman regaled attendees of the Victoria synagogue’s event with a story about the Baal Shem Tov from Buxbaum’s Storytelling and Spirituality in Judaism. It happens in the time just before the Baal Shem Tov’s passing, when he told his disciples what they should do when he was no longer with them.

After two-and-a-half years as a peripatetic purveyor of tales following his teacher’s death, Rabbi Yaakov gets wind of a magnate in Italy who would give a gold coin for each story of the Baal Shem Tov he heard.

When Rabbi Yaakov arrives at the gate of the rich man’s villa, he says to the servant, “Tell your master that the personal assistant of the Baal Shem Tov has come, and I have many wonderful stories to tell from experience and not from hearsay.”

The rabbi is invited in and, after a week of good food and relaxation, Shabbat comes. Following a festive meal replete with songs, it is time for stories. But, just then, something peculiar takes place. All recollections of the Baal Shem Tov evaporate from Rabbi Yaakov’s memory. Every trick he tries to elicit the stories fails. The host tells him not to worry, to go to sleep and try again the next morning.

The next day arrives and nothing has changed. Shabbat passes. The other guests at the magnate’s home grow increasingly doubtful. As it comes time to leave, still no tales have sprung from Rabbi Yaakov’s mouth, yet the magnate gives him a bag of gold anyway.

When the rabbi suddenly recalls everything, as he enters his carriage, the magnate asks him to return and Rabbi Yaakov tells the story of a journey he had taken with the Baal Shem Tov.

The group ended up in a town where angry crowds were drawing lots to carry out violent acts against Jews. Everyone was scared, except the Baal Shem Tov. They came to their lodgings in the town and the great Chassidic master went upstairs and opened a window looking out to the main square. The Baal Shem Tov pointed to a house across the square and out of that house walked a bishop, the man responsible for inciting the townspeople against Jews. The Baal Shem Tov told Rabbi Yaakov to bring the bishop to him.

Rabbi Yaakov admits that he doesn’t know what the bishop and his master discussed. Nonetheless, as he finishes his story, tears are streaming down the rich man’s face.

“I can tell you exactly what the Baal Shem Tov said, for, you see, I was that bishop,” says the magnate. “Fortunately, I had holy relatives who convinced the Baal Shem Tov to save my soul. To do so, I had to do many mitzvot. He said I would know when I had been forgiven when someone comes to me and tells me my story.”

During non-pandemic times, Litman performs at schools (from nursery to university), libraries, senior facilities, theatres, houses of worship and other local, national and international venues. To hear her recent talk in full, including the entire Baal Shem Tov story, visit kolotmayimreformtemple.com/shoshana-litman. For more information on her, visit maggidah.com.

The next Kolot Mayim lecture, which takes place Dec. 6, at 11 a.m., features Jonathon Orr-Stav on the topic Arabic Hebrew: An Introduction to How Modern Israelis Really Speak. For more information, visit kolotmayimreformtemple.com/lectures.

I was invited into a very special world on June 30 – that of L’Chaim Adult Day Centre. Described as a therapeutic day centre for home-bound elderly, a place where safe, caring monitoring is provided along with kosher, home-style meals in a happy, embracing atmosphere, with multilingual staff, it is all that and more.

I was asked by Shoshana Litman, a gifted maggidah (storyteller), to come and watch one of her sessions at L’Chaim. After receiving permission to attend from Annica Carlsson, who is in charge of the centre, I arrived in time to see 14 seniors, mostly women, actively enjoying a ball exercise led by Marla Simcoff. When that ended, Litman entered the circle, smiled, introduced herself and explained why she was there, and that I was there to take photographs.

Litman opened with a blessing over the water, which she drank, and then introduced her mother, Shirley Kort, a member of L’Chaim and her mom’s friend, Zoe Oreck, who had come to visit.

The story Litman had chosen was one of Peninah Schramm’s – The Innkeeper’s Wise Daughter – which included riddles and a song. It easily invited audience participation and the listeners were only too glad to do so.

After I listened, enjoyed and participated in Litman’s storytelling, and I heard the various questions and answers, I began to realize the scope of what is accomplished under the watchful eyes of L’Chaim staff and Carlsson, who explained that the wide range of work on cognitive skills is easily managed because of the small size of the group.

In honor of her visit and in her mother’s name, Litman presented a copy of a calendar commemorating the 151 years of Congregation Emanu-El in Victoria. She showed photos of the costumes worn on the anniversary evening last year, as the event included a reenactment of those times. The photos brought back precious memories for one audience member, who was reminded that she had attended that event.

I left with a good feeling, and the others, who were chatting away over lunch with one another, also seemed relaxed and happy. We are fortunate to have this facility in our midst. Let’s grow old together.