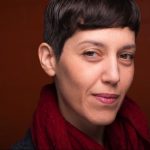 Jewish community member mia amir is the dramaturg of Wypsa, which is at the Fringe Festival until Sept. 16.

While the plot of Wyspa may bring to mind William Golding’s Lord of the Flies, the book was not a direct inspiration for this work, co-writer and director Julia Siedlanowska told the Independent.

The creation of the play, which opened at the Vancouver Fringe Festival Sept. 7, began with the reading and discussion of an original story written by Siedlanowska and Kanon Hewitt.

“Our team includes five collaborators between the ages of 11 and 16,” said Siedlanowska. “They have all been involved directly in the creation of this piece through world-building, research, writing text, improvisation, creating soundscapes, costumes and props. They are all also performing in the piece.”

Siedlanowska and Kanon’s story “tells the tale of a walled-in community that has sustained itself through oil extraction for centuries,” Siedlanowska explained. “When fires start raging within the walls, the mothers of the community make the decision to send their children away through the only opening to the outside world – an opening to the ocean.

“After days of drifting, they finally arrive on an island. Here, they must decide whether they will live by the rigid rules of their old society or create their own.

“We separated the experience into three worlds,” she continued. “The home world, the world of the boat and the world of the island. From there, we collectively decided the specific circumstances of each of these, including what rules apply in the home world and the island world. The youth created their own characters and decided on each of their relationships to each other. Text and movement were all generated by the collaborators, with myself and Kanon making decisions about the show structure with the help of our dramaturg mia amir. There are some improvisational aspects – much of the show takes place within an improvised structure with scenes changing depending on the audience.”

The end result came from research of instances in which children were removed from their homes during the Second World War, said Siedlanowska, “including Japan after the Tokyo bombings and the Kindertransport of Jewish children in Europe, as well as the Sixties Scoop in Canada.

“One piece of literature that I did directly mention in the initial phases of brainstorming was the story of King Matt the First, written by Polish-Jewish playwright Janusz Korczak. Korczak ran an orphanage in Second World War Poland. He was a pedagogue, writer and children’s rights activist. The orphanage was called Our House, and the children living there published their own newspaper and held their own court when conflicts arose among them. King Matt the First was about a child who becomes king, and what might happen if children were rulers.”

However, the idea of the story first arose, she said, “from questions around the rise in domestic violence in Alberta as a result of the economic downturn and job loss in the oil and gas industry. This violence is predominantly towards women.

“This then led to questions around how raising youth within rigid gender identities might enforce these patterns of violence. Instead of writing what we think youth might have to say about these themes, we decided to ask directly. In relation to climate change, we also wanted to ask the question, how do we – as an adult audience – react to dialogue around the climate crisis when those who will inherit the planet stand directly in front of us?”

Wyspa is being presented as part of Generation Hot, a mentorship initiative of the Only Animal and the Fringe Festival, which presents the work of seven writer-directors between the ages of 17 and 24. This year’s program is called Waterborne. “Each participant has found a personal response to a chosen site on Granville Island and the theme of water,” explains the press release. “Two programs of these short works will run in rep during the 2017 Vancouver Fringe Festival…. Wyspa is paired with Citlali: A Fantastic Tale About Water by a Mexican Poet by Brenda Muñoz.”