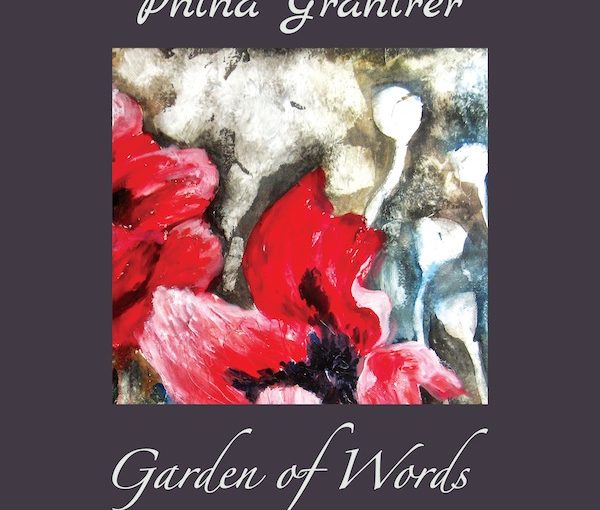 “Unexpected and unplanned, like small gifts offered by a kind friend, poems have been forming in my head ever since I was a child,” writes Pnina Granirer in her most recent book, Garden of Words. “Unexpected” is the perfect word for Granirer, who continually reinvents her artistic self.

Garden of Words is a beautiful mix of Granirer’s painted “words” and her written ones, her more distant past and recent experiences, including the loss of her life-partner of more than 65 years, in August 2020. The book is dedicated to Eddy and the final poem (“Goodbye”) and image (“Eddy Studying During Power Outage,” 1957, charcoal on paper) are of him.

This collection is a very personal work that shows Granirer’s powers of observation, both in her paintings and drawings, as well as in her poetry. It also shows her strength via her willingness to be vulnerable.

Two poems are part of the book’s foreword. The first, explains Granirer, who was born in Romania, “expresses the joy and happiness of a 10-year-old when on August 23, 1944, the Soviet Red Army entered our town, on the day that the cattle cars were waiting at the train station to take us away to the concentration camps. It had been a narrow escape, indeed!” The second is the title poem, in which Granirer notes that she is a painter, “I speak with paint and brush / my words are written / with colour and with line.” But, she recognizes the power of words, their ability to “conjure a Universe”: “I should so like to plant / a garden of words / in my field of colours // and watch them grow.”

Garden of Words has six sections: Sea and Stones; Pandemic; Dancers; Memories of Spain; This and That; and Closure. Her poems are short, concisely capturing the ephemerality of life – not even stones are permanent, the ebb and flow of water covers and exposes them, reshapes them, while they absorb past lives (fossils) and form sculptures. Stones offer inspiration and company to Granirer, who listens to their “quiet whispering.”

While all of the paintings Granirer has selected for this book interact wonderfully with her poems, reinforcing their themes, particularly powerful is the interplay between the poems about COVID-19 and artworks that had, of course, other meanings when they were created years ago. The new poem “All Together Now,” which starts, “This novel enemy is democratic. // In its indifference / all prey is equal,” is followed by the 2008 painting “Utopia – All Together Now,” which features four people dancing within a diamond-shaped boundary. One dancer’s head and their left foot cross the barrier. With dancing as one of the activities that has been restricted during the pandemic and the fact that we’ve all had to create bubbles (diamonds?) within which we can socialize safely, this probably once-joyous painting takes on a more sombre joy.

There are also sparks of sombre humour in various poems, including “Visit with El Greco” and “City Woman.” And the fear is palpable and relatable in the prose poem “Grenada,” which includes the stark reflection: “Five hundred years after the Inquisition, the burnings and autos-da-fé are pushed out of memory, conveniently forgotten, but the ceremonies persist; the dark past is not taught in Spanish schools. It has been turned into an Easter celebration, a parade, a fun event.” But, for Granirer, the crowds are ominous, evoking images of the Inquisition: “I am a Jew and it is coming for me. I am a Muslim and I am afraid. I am a Black woman and here is the KKK coming. I am terrified. The sight of those pointed hoods unleashes a flood of emotion I did not know I was capable of. My anxiety is close to panic.”

There are happier reflections. “Pas-de-deux,” for example, describes two men, each flying their own kite, but close together: “They leap / they dance / they bend and kneel / they sway from side to side / and turn as one.” When the men and their kites finish their dance, they receive “scattered applause from the small gathered crowd.”

At age 86, Granirer continues to create in new and meaningful ways. She launches her new book at the Cherie Smith JCC Jewish Book Festival on Feb. 9, 1 p.m. Visit jccgv.com/jewish-book-festival.