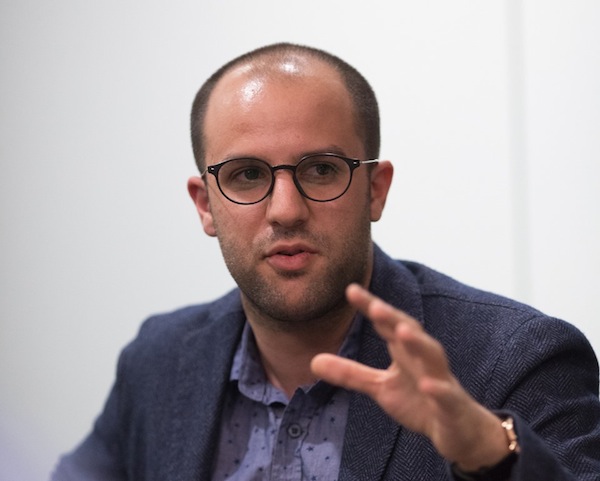 This article is one in an occasional series about people with British Columbian roots having positive impacts in Israel and elsewhere.

For Vancouver-born Israeli Eli Kowaz, there is only one path to ensuring Israel remains both a Jewish state and a democracy: a two-state solution. The road to that ideal may be long and the slogging hard, but this is the core mandate of the Israel Policy Forum, where he serves as communications director.

Though focused on Israel and its situation, IPF’s mission is to “shape the discourse and mobilize support among American Jewish leaders and U.S. policymakers for the realization of a viable two-state solution.”

Israel currently has military control over the entire land from the Mediterranean Sea to the Jordan River but, to continue being a Jewish state as well as a democracy, Kowaz said, Israel faces a decision.

“It can decide to annex the West Bank, keep the entire land and, if it wants to be a Jewish state, it will have to give up on the democracy aspect because, if it was to grant all the citizens living between the Jordan and the Mediterranean equal rights, then already today, Jews would be about 50-50, a small majority,” he said.

The answer is not cut and dry, he acknowledged. The Jordan Valley is a vital Israeli security interest and, come what may, Israel is likely to maintain military control there for the foreseeable medium-term. But both Israeli Prime Minister Binyamin Netanyahu and U.S. President Donald Trump have recently obfuscated their countries’ erstwhile support for a two-state solution. In Netanyahu’s case, it’s at least partly political, said Kowaz.

“He is dependent on his right-wing coalition partners, he’s willing to say things and even do things to secure his position as prime minister, even though he’s already surpassed [David] Ben-Gurion as Israel’s longest-serving one,” Kowaz said. “A lot of it is right-wing pandering to those people. Another part of it is a genuine security concern. The research done by the top security experts in Israel and others show that there is a way to keep that area secure while advancing a gradual separation of Palestinians and an eventual two states. Obviously, it’s not something that’s happening tomorrow.”

Kowaz, now 29, grew up in Vancouver’s Oakridge neighbourhood with an Israeli father, Joseph Kowaz, who moved to Vancouver in his 20s, and a mother, Andrea (Rogow) Kowaz, who moved here from New York at a young age. His late maternal grandparents were community leaders and academics Dr. Sally and Dr. Robert Rogow.

He attended Vancouver Talmud Torah and Hebrew Academy for elementary school and Magee and King David high schools, “so I kind of got a taste of Orthodox Jewish education, more of a secular traditional and also public school, so it was nice to have,” he said.

Kowaz did a gap year in Israel after high school, studying at Hebrew University and Ben-Gurion University. Returning to Canada, he graduated from McGill University in Montreal and then completed a graduate degree in digital media at Ryerson University in Toronto. His final project for his degree addressed ways to remember and educate about the Holocaust in the 21st century.

“From the beginning, I wanted to do something that was Israel-related,” said Kowaz. “So, it was either move straight to Israel or look for something Israel-connected that was outside of Israel.” He moved to New York City and soon got work at IPF. He moved to Tel Aviv last year and, in July 2018, married Tal Dor, a former graphic designer for the Israel Defence Forces newspaper BaMahane. She occasionally gives Kowaz advice and support from her experience.

Part of a generation that gained political awareness during the Second Intifada, Kowaz said he has been affected by the violent imagery of those days.

“I obviously want the best for everyone, but Israel is most important to me and I want Israel to be a Jewish state,” he said. “I want Israel to be a state that’s also accepted in the world to the best that it can be. Obviously, there will still be people that hate us but I don’t want Israel’s best allies to be Hungary, Poland, these right-wing [governments] with elements of fascism. We don’t want those to be our best friends, so, at the end of the day, I don’t think we have a perfect partner and the Palestinians, they’re never going to be a perfect partner, but we should do what’s best for Israel, which is at least preserve conditions for a two-state solution, a form of separation to secure Israel as a Jewish and democratic state as a goal for the next five, 10, 15 years. Keep that a possibility. And, right now … I think it’s definitely still an option. It’s still on the table. We haven’t killed it. But it’s treading in the wrong direction.”

The Israel Policy Forum began in 1993, said Kowaz, on the very day the day of the famous handshake on the White House lawn with Yitzhak Rabin, Bill Clinton and Yasser Arafat.

“At that time, Yitzhak Rabin was looking for American Jewish support for his vision of peace,” he said. “Even back then, AIPAC were already becoming close with Binyamin Netanyahu, who [had been] Israel’s ambassador to the UN and, at that time, he was already opposition leader.”

IPF does a lot of work in Washington, D.C., with policymakers, convening roundtable discussions and panels with congresspeople, congressional staffers and opinion leaders, as well as organizing events in synagogues around the United States, all focused on preserving conditions for two states.

Their positions are credibly backed up, said Kowaz, by security experts in Israel, called Commanders for Israel’s Security, which was begun by former major-general Amnon Reshef, a hero of the Yom Kippur War, and includes a cadre of 290 former IDF generals, Mossad and Shin Bet division heads and others.

“They work in Israel, so we work closely with them to relay their policy proposals and their messaging to an American audience,” he said. “It represents about 80% of the retired security establishment. It doesn’t get more legitimate than that. These are people that, I think, between all of them have 6,000 years of experience at the highest positions, making decisions constantly with people’s lives.”

While AIPAC has an upstart challenger on the left, J Street, Kowaz sees IPF as a more fact-based alternative to the politically oriented advocacy groups.

“People are looking for a voice that is different, that’s more policy-based, less trying to rally the troops and more looking at the facts,” he said. “I think we provide that kind of home and, in a way, everything’s very fact-based.”

Kowaz looks forward to continuing to work toward the perpetuation of Israel as a Jewish democratic state.

“It really doesn’t matter to me what the role is, I think that’s where I’d like to see myself,” he said, adding: “I’ve given up on the professional soccer career.”