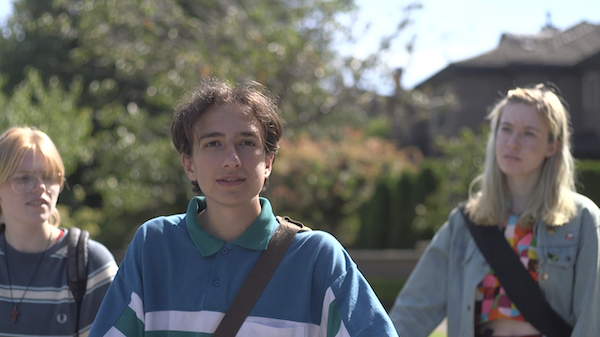 It was a rainy day near the beginning of the pandemic. Sourdough was in the oven, Zoom was new and fun and spirits were higher. That’s when I found out I’d won the Earl Parker Award and I’d get to make my film for the Edmonton Jewish Film Festival. Little did I know I would have to go through months of hurdles, Plan B ideas and cast my entire family to get my film made.

A few months prior, my mom had passed me the Jewish Independent and showed me the notice for a film award at the Edmonton Jewish Film Festival. At the time, I was co-directing a musical, directing a film and finishing my applications for universities, so I didn’t think much of it. But, I am very glad I eventually picked up that notice and applied to the competition because it changed the course of my path.

Last year was tough in a thousand ways. The pandemic hit everyone differently and, no doubt, we will all have lifelong effects because of it. When I originally pitched my film, David Michael Frankel Feinstein-Goldberg and the Unbarmitzvah, in 2020, I had a vision that could only have been actualized pre-pandemic. I adapted it and changed things to meet the constraints of the circumstances and I truly did my best to pull it off in a safe way for the entire cast and crew. One of the changes I had to make was to cast solely from within my bubble and community, which was not what I had originally planned to do.

I normally cast my films through Vancouver Actor’s Guide, UBC ACTRA and Facebook film & TV pages, but, instead, I ended up casting my parents as two of the main characters. As much as they are incredibly charismatic and intelligent people, they’re both doctors, not actors the stature of a Leonardo DiCaprio. So, performing was a big challenge for them and, vice versa, for me directing them. That being said, it was a fantastic experience for me to learn how to produce a film under circumstances that many filmmakers haven’t had to face.

In the early stages, I had a few moments when I felt selfish and embarrassed to want to make films during a literal plague. How could I have the chutzpah to be making dumb little comedy films while millions of people have died and more are dying? Why should I worry if my lenses are going to work for a scene while people are saying goodbye to their loved ones on iPads?

But then it dawned on me just how much we rely on art and story for our own sanity. We tell our children stories from the moment they are born, and we offer and receive stories to our last day on earth. We humans are, at our core, storytelling creatures. In moments of darkness we turn, time and time again, to art to save us. We are drawn to an astonishing multitude of fictions – on pages, on stages and on screens; stories of murder, love, war, conspiracies; stories fictional and true.

We are obsessed with story, but our obsession runs deeper than we think. We can walk away from our books and our screens, but story is like gravity: an inescapable force field that influences everything, but is so omnipresent that we hardly notice it. We’re social creatures and, with the added challenge of isolation, art has become a tool for staying connected with one another.

I’m now finishing up my first year at film school, in Capilano University’s Motion Picture Arts Program, where I have been learning invaluable skills and refining my knowledge and abilities in writing, directing and producing. With the vaccination rollout well underway and more knowledge and experience of how to safely work together in-person, I am ready to see what’s next for film and storytelling. I hope you are, too.

My film David Michael Frankel Feinstein-Goldberg and the Unbarmitzvah screened at the Edmonton Jewish Film Festival on May 2 and I will be speaking on a panel of past Earl Parker Award winners on May 9, 11 a.m., on Zoom (meeting ID 846 7697 0846). To view the film, visit jewishedmonton.org/festival-news; after the festival, it will be publicly available on Vimeo.

Malka Martz-Oberlander is a 19-year-old screenwriter, film and theatre director and actress, currently “squatting” at her parents’ house in Vancouver, the unceded territories of the Squamish, Tsleil-Waututh and Musqueam peoples. Her website is malkamo.wixsite.com/film. She thanks the Edmonton Jewish Film Festival and the Earl Parker Award for their kindness and generosity in making David Michael Frankel Feinstein-Goldberg and the Unbarmitzvah possible during such an unpredictable time for artists.