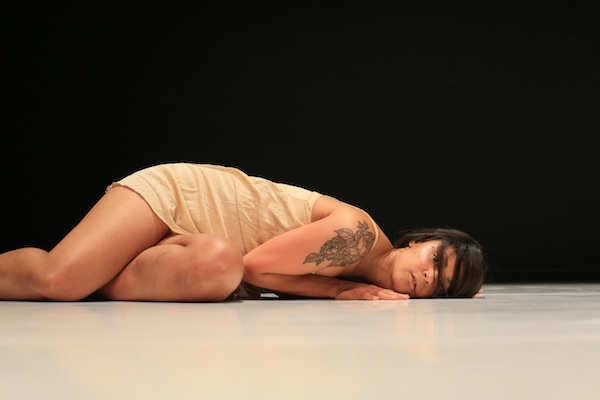 Amber Funk Barton presents VAST at the Dance Centre Nov. 22, as part of Dance in Vancouver. (photo by Chris Barton)

From Nov. 20 to 24, the Dance Centre presents the 12th biennial Dance in Vancouver. This year’s event was programmed by Dieter Jaenicke, director of the internationale tanzmesse nrw in Dusseldorf, Germany, and features the work of at least two Jewish community members, Amber Funk Barton and Noam Gagnon.

“What I find most impressive about dance in Vancouver is the fact that there are so many different identities of contemporary dance, connected to certain studios, companies, artists,” Jaenicke told the Independent. “It feels like the dance is spread out in the entire city, in very different and distant neighbourhoods, with the Dance Centre in the centre…. Trying to get familiar with dance in Vancouver, I felt like a collector of stories, stories about dance, stories about human beings…. That is why I chose the sentence of the Vancouver dancer and choreographer Amber Funk Barton as a kind of motto for this edition of Dance in Vancouver: ‘There are global stories in everything.’”

Barton, an award-winning choreographer, formed her company response. in 2008, but she will be performing the solo piece VAST, “an ode to the explorer that resides in all of us, the traveler and the dreamer who wonders what resides beyond the edge,” at DIV on Nov. 22. Noam Gagnon’s company, Vision Impure, will be presenting Pathways, which “explores the intricate push and pull of relationships impacted by urban living,” on Nov. 21. During DIV, there will also be performances by Raven Spirit Dance, Joshua Beamish/MOVETHECOMPANY and OURO Collective, with installations by Company 605 and Lee Su-Feh/battery opera, as well as discussions and other free events.

About how he chose the program, Jaenicke said, “First, I tried to get an overview of what is happening in dance in Vancouver – I visited companies, studios; saw rehearsals, performances; talked to many artists from the dance field. I was impressed by the diversity, the different backgrounds, cultures, approaches to dance and about the high quality of dancers and choreographic creativity.

“The selection was very difficult due to the amount of very interesting and convincing proposals,” he said. “With the choices I had to make, I tried to follow the diversity which I found so impressive, to include established and emerging artists, include the different cultural and artistic backgrounds of the choreographers, include indigenous works, different styles and genres of contemporary dance. But, the most important criteria was, of course, the artistic quality. Although it is difficult to describe what is artistic quality, I believe it is something objective to be seen, to be discovered, to be chosen.”

Both VAST and Pathways saw their premières at the Vancouver International Dance Festival.

“I am so pleased and honoured to perform VAST as it originally premièred in 2018 – and in the same theatre – for Dance in Vancouver,” Barton told the Independent.

The creation of the work started in 2015. Surfing the internet, Barton came across the quote from Carl Sagan that is included in the description of VAST: “We are a way for the universe to know itself. Some part of our being knows this is where we came from. We long to return. And we can, because the cosmos is also within us. We’re made of star stuff.”

“I was so struck by the poetic nature of the quote and found it so beautiful and comforting,” said Barton. “It made me start to think a lot about life, my life, and how everything and all of us in the universe are connected.

“That also got my imagination going and soon I realized I had an idea for my next work. I knew quite early on that this was supposed to be a solo and that I needed to perform it. I knew, as a choreographer and dance artist, that all the feelings and emotions and images I wanted to explore and express would have to come from my body and personal expression.

“I also knew, but was unclear at the start of the project, how to transform the performance space so that the audience could suspend belief and be transported with me into an otherworldly arena. My instincts told me I needed to work with a scenographer or set designer.”

Barton approached Andreas Kahre and they “started to have many discussions about universal space and The Little Prince.” She also brought her long-term collaborator and light designer, Mike Inwood, into the process.

“Together, our research began in the theatre, playing with objects and materials to create the surface of the moon and other environments relating to space and scale,” she said.

After that, “I knew it was time to go back and figure out how to create a journey through dance and movement, which then seemed like such a daunting task.

“By this time, I brought in another dear long-term collaborator of mine, music and sound designer Marc Stewart. He had the opportunity to have a glimpse and visit us while we were building environments in the theatre and, from there, he created a couple of 20-minute series of sound samples. Upon hearing one, I knew it was the direction I wanted to go and it helped me immensely to start creating a movement journey.

“Because the music at that point was a series of samples, the sound was constantly changing, which I thought was perfect,” said Barton. “As far as the loose narrative of the solo goes, I wanted to create the sense of waking up in a dream, being lost and, as in a dream, constantly dealing with new environments and surroundings out of my control.”

Along the way, the creative team engaged more support to both flesh out and edit down their ideas. They also had a two-week residency supported by Dance Victoria, which, said Barton, “was instrumental in finalizing the set and visual aesthetic of the production.” About a year later, they had a week residency at the Massey Theatre, which led to the première, in March 2018, at the Dance Centre, as a co-production with the Vancouver International Dance Festival.

On the response. website, VAST is described as “a singular expression of an individual’s choice to be by oneself, a meditation on our limitations as human beings and how, despite these limitations, we still desire to propel ourselves forward into unknown territory.”

“As human beings, there are times we assert our agency and choose to be ‘by oneself’; that night you wanted to stay in, the decision to leave a relationship, the choice to travel and/or explore alone. For me,” said Barton, “‘being alone’ can be similar, such as being alone with your thoughts and/or feelings, but then ‘being alone’ is that liminal space I think we’ve all experienced: feeling so small, as if you couldn’t possibly make a difference in the world. Feeling overwhelmed by how we want to, or should, live our life. Feeling lost as to what our purpose on this planet is. And then, hopefully, to choose to face our fears by ‘being alone’ and to overcome and/or embrace them.”

The story of the protagonist of VAST “starts with waking up in an environment and quickly realizing she has no control of the world around her,” said Barton. “At times, this is playful and full of wonder but, for the most part, it is terrifying. When I perform the work, I always imagine myself being trapped in a dream and being unable to wake up. And, of course, it is terrifying being in unknown territory alone.

“Being alone, traveling by yourself, exploring on your own – I believe these are the biggest gifts we can give ourselves because they ultimately bring us closer to meeting our true selves. There is a point, where we learn to stop fighting the rhythm of life and accept it, embrace it, realize that there is a force greater than us that is allowing our heart to beat and the conjunction of the planets. There are simply things we will never be able to understand and/or explain or have the answers to.”

Towards the end of Barton’s solo, when she is “exhausted and feeling completely alone, there is a faint sound in the distance,” she said. “A message. A song. Something that connects with our molecules and convinces us to keep going. I think we have to be very quiet to get our ‘messages.’ For me, in the dance, when I receive my message, it is also completely submitting to the universe, accepting my fate, accepting my weaknesses and limitations, realizing I am no better or worse than anyone else…. My absolute final movement is inspired by the whirling dervishes of Turkey, who spin with one open palm towards the sky, the other palm facing downwards towards the ground in recognition of the soul’s connection to both heaven and earth. I can’t think of a more appropriate image for VAST to end with.”

VAST does not provide any answers to life’s questions, but, rather, said Barton, “I think of VAST as a moving meditation and I feel it is quite interactive for the audience with regards to how they interpret the journey of the protagonist.”

Of venturing into the unknown herself as a creative person, Barton said, “We all have the capacity to investigate change. But, of course, it is not easy and certainly not encouraged in our society. It’s scary so, sometimes, we need people to remind us to take that leap. I think artists play a very important part in our society, of not only inspiring their communities but also reminding them that we are not alone in our thoughts and feelings. I believe art is a confirmation of our humanity and, a lot of the time, it is art that encourages people to take that next step or to pursue their dreams.”

“Speaking as a creator,” Gagnon told the Independent, “the act of creating a new work is an act of courage. There is no guarantee that the images I initially picture in my mind and what I intend to evoke will reach the audience with the right attention to tension. What is required of me is the deepest awareness and careful attention to each and every aspect I can think of in order to find the perfect physicality, musicality and intention in the talented dance artists with whom I am working. That awareness of and attention to every aspect is what I was referring to when I described Pathways as being my ‘heart, soul and brain.’”

The Independent interviewed Gagnon prior to the première performances of Pathways at the Vancouver International Dance Festival this past March. (See jewishindependent.ca/dance-explores-our-relationships.) The JI asked him whether any elements of the work had changed since then.

“When the 10 incredibly generous and talented dance artists of Vision Impure return to rehearse one week before the Dance in Vancouver biennial begins, I will likely be making the few changes that I feel are most needed,” said Gagnon. “My first priority for the upcoming process is keeping my dance artists safe and ready to blow the roof off the theatre the night they perform Pathways. The work is mentally, physically and emotionally demanding and requires the same focus from the dance artists that I required of myself during creation. We have a tough job ahead of us because, with this kind of intense work, nothing can be taken for granted.”

Pathways has not been performed since the dance festival in March, but Gagnon would like more audiences to see it.

“Speaking for this generous cast of dance artists, they can hardly wait to be performing this beast of a work,” he said. “Like me, they are deeply aware that the effort and demands required to perform this work may seem impossible at times, but the result is this incredibly empowering, life-changing reward. We are all keeping our fingers crossed that the Dance in Vancouver biennial presentation will be productive.”