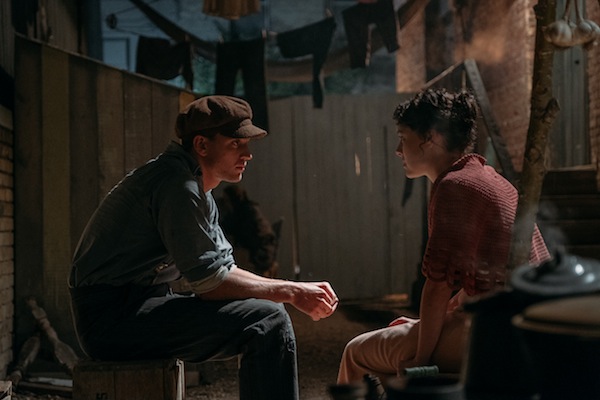 Marshall Williams as Stefan Sokolowski and Laura Slade Wiggins as Rebecca Almazoff fall in love in the movie musical Stand! (still from the movie)

The film Stand! comes out in Cineplex theatres across Canada on Nov. 29. Locally, it will play at SilverCity Riverport Cinemas in Richmond. The story of how the independent film got to the big screen is as interesting as the movie itself. And both it, and the musical on which it is based, started with a simple conversation.

The idea for the musical Strike! came over a deli sandwich in 2002. Then-Winnipeg Free Press editor Nicholas Hirst suggested to Winnipeg composer, producer and writer Danny Schur that there might be some musical-worthy drama found in the Winnipeg General Strike of 1919. Schur – who already had two full-scale musicals on his CV – followed up, coming across a photo of Ukrainian-Canadian Mike Sokolowski, who was killed by one of the “special police” – the actual police force, who sympathized with the strikers, had been fired and replaced with thugs – in what is now known as “Bloody Saturday,” June 21, 1919. Being Ukrainian-Canadian himself, Schur was hooked.

He wrote 18 songs and the script for the musical Strike! by 2003. A workshop of it at the University of Winnipeg connected Schur to director Anne Hodges and writer Rick Chafe, who helped get the production ready for its première – first an abridged version, an outdoor show in 2004; then the full version in 2005. (Chafe is also co-writer of the film with Schur.)

“The idea for the movie first sprang from a conversation I had with Jeff Goldblum in 2005,” Schur told the Independent in an interview. “He was sitting beside me at the Winnipeg world première (he was in a relationship with our Winnipeg female star [Catherine Wreford], whom at that time had a Broadway career). After seeing the musical, he stated, ‘Big story, big ideas, it would make a great movie.’ And I thought, ‘If Jeff Goldblum says it will make a great movie, that must surely be the case.’ I naively believed it would take two or three years to come to fruition and it took 14. Shows what I knew!”

Those years would be filled with adapting the musical from stage to screen, raising the large amount of money needed to film a movie, casting the roles, finding a director, finding a production company, etc., etc.

The considerations in translating the stage production to film were legion, said Schur. “First, some songs had to go, because the average number of songs in a movie musical is eight; the stage show has 18. Some of the cuts were obvious – because some of the actors we cast were not singers. In all cases, it was a matter of what served the story best. What works on stage does not necessarily translate to screen. Rob [Adetuyi] was extremely helpful in this regard, having as much experience as he does with film.

“But the biggest change to screen was Rob’s doing: to make the film more diverse. Emma, the black maid, was a conscious change to reflect history better and have a more diverse film. So, too, was the case with the character of Gabriel [a Métis soldier who served in the war].”

When Adetuyi, the director of Stand! (whose mother is Jewish, as it happens), changed the maid character from being Irish to being a black woman who had fled racist violence in the United States, Schur wrote a new song, “Stand,” which became the title of the film.

Sokolowski is one of the main characters in both the musical and film. He and his son, Stefan, are struggling to earn enough money to bring the rest of their family to Canada from Ukraine. Among their neighbours are Jewish siblings Rebecca and Moishe Almazoff, the latter of whom is based on a real person. (Moishe Almazoff is the pen name for Solomon Pearl.)

Amid the harshness of life and their bleak future, Stefan and Rebecca fall in love. Schur told the JI that he based the interfaith romance on that of his aunt and uncle, “she the Christian, he the Jew.” Of course, the couple’s relationship isn’t welcomed by their families and respective communities. And, of course, the poor living and working conditions, the labour unrest, the threat of deportation and the violence are not conducive to love.

In a neat turn, the making of the film has led to changes in the musical.

“I always say, musicals are never written, they’re rewritten,” explained Schur. “So, where, before, the movie was substantially different from the stage musical, we have now edited the stage version to reflect the movie. So, now they’re pretty close. Having said that, the stage play has more songs.”

The music is certainly one of the highlights of the film. In this regard, and also another of the Jewish connections to the production, Schur noted, “Gail Asper is the hugest supporter of the movie, having invested in the stage show and the movie, and she convinced Montreal’s Sharon Azrieli to do the same. Sharon, who is an opera singer, sang the closing credit song, ‘Change,’ which I wrote for her.”

As for the feat of getting an independent movie a national release, not to mention deals for distribution in the United States and Japan, Schur said, “This is a truly indie release; in other words, there is no distributor involved. We went to Cineplex and said, ‘We have an audience. Please give us some screens.’ Where Cineplex could have given us a token, small number of screens, they provided screens from sea to shining sea, which is a testament to their belief in the film. I cannot say enough good things about the good people at Cineplex for giving us our chance to make a stand, especially in the midst of so busy a late fall season.”

Stand! showtimes and tickets are listed at cineplex.com/movie/stand.

“The movie is a unique opportunity to take the experience of the Jewish community in Canada circa 1919 and apply the lessons of the era to today, be those lessons for the community itself, or the broader community of immigrants,” said Schur. “In an era where discrimination is on the rise, the movie is a metaphor that teaches us that ‘love thy brother’ is the best way forward.”