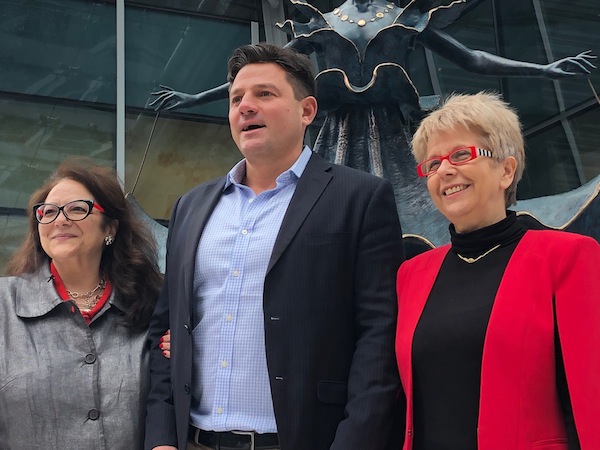 Marc Chagall needs no introduction. But perhaps not everyone is aware that there is a gallery in Vancouver that specializes in original graphic works by Chagall, as well as a few other 20th-century European masters.

“We opened the gallery in 2005,” Susanna Strem, owner of Chali-Rosso Art Gallery, told the Independent. “Since then, I always wanted to have a Chagall show at the JCC. I was familiar with the community and liked it. When I first immigrated to Canada and arrived in Vancouver, I often went there.”

Now, she finally will have her wish. On Sept. 15, she is bringing her selection of Chagall’s lithographs to the Sidney and Gertrude Zack Gallery at the Jewish Community Centre of Greater Vancouver.

Strem considers herself not just a gallery owner but also an art educator. She is passionate about art and she longs to share her passion and her knowledge. She often discusses multiple aspects of the arts with gallery guests and she loves answering their questions. A recurring question concerns the nature of lithographs.

“Not everyone realizes that lithographs are original works by the artists,” she explained. “First, the artist creates an image on a stone block and then he transfers it on paper. It’s a time-consuming process and, after the artist makes a set number of copies, the stone image is destroyed. It is called a ‘limited edition.’ A limited edition could consist of 50 or 100 copies, or however many the artist had decided upon, but each copy has a number and is signed by the author. They are all originals, and that’s what we sell in our gallery. That’s what we’ll be bringing to the Zack.”

Lithographs, or prints on paper, while originals, are not unique. Consequently, they are more affordable than other works by the same artist.

“Some people, when they think of art at all, they think oil on canvas,” Strem mused. “But most artists create in different media. Creative minds always try something new and interesting. Salvador Dali, one of the artists we represent, created many amazing sculptures. Pablo Picasso worked on pottery. Both Picasso and Chagall enjoyed printmaking. When we first decided to open the gallery, we knew we wanted to represent graphic works on paper because of their relative affordability, compared to the oils. Oil paintings by Chagall could go for enormous prices, but a lithograph by Chagall could cost only a couple thousand dollars.”

Strem started her professional life far from the artistic field. She was born in Hungary and studied art history and computers in Budapest. After graduating from university, she worked as a software developer and IT consultant for many years, first in Hungary, then in several European countries and, for a short spell, in Israel. None of those places suited her for long.

“Europe has too much history and culture; it’s too heavy a burden. That’s why Canada, and specifically Vancouver, work for me,” she said. “It is a new world here, it is lighter, more accepting.”

In 1994, Strem settled in Vancouver and resumed her work with computers. For the first decade she lived here, she worked as an IT specialist, until the moment came when she knew it was time to embark on a new career.

“When my husband and I opened the gallery, it was a big change. It would have been impossible in Europe. People there don’t switch careers: once an engineer, always an engineer. If I decided to open a gallery in Europe, after being an IT person for years, everyone would look at me and think something was wrong with me. But it was OK in Vancouver.”

Chali-Rosso first opened on Granville Gallery Row – a short strip of Granville Street between Broadway and the bridge – where many major Vancouver galleries still reside.

“Art collectors knew to come there if they wanted some art,” she explained. “It was the right place to open a new gallery.”

A couple years ago, after their collection quadrupled in size, they moved the gallery to a new and larger facility in downtown Vancouver, on Howe Street.

They chose the name Chali-Rosso for their gallery because of the artists that comprise the majority of their collection: four European masters of the first half of the 20th century.

“The gallery name is an acronym of their names: Marc Chagall, Salvador Dali, Joan Miro and Pablo Picasso,” said Strem. “We focus on these four, although we have some works by other artists, too, including a small but wonderful piece by Rembrandt.”

For Strem, opening a gallery on the West Coast is a challenge.

“I like Vancouver, like living here,” she said, “but it’s not easy for any art gallery to engage people’s attention. Western Canada is still too new, too young. Most people are attracted more by the outdoors than by art. To spend $300 on bicycle gear is fine, but $800 on a piece of art is too much. There is no centuries-old tradition here, no art on the street. In Europe, people are surrounded by art, but here, art is not an integral part of life. It’s up to us, gallery owners and artists, to change the situation here. We’re pioneers.”

Marc Chagall’s Bible Suites opens at the Zack on Sept. 15, 7 p.m., with a reception to which the public is invited. The exhibit runs until Oct. 26.