Geoff Berner doesn’t mince words. An excellent musician, he puts them to melodies that range from mournful to joyous to angry, sometimes all in one song, sometimes all at the same time. There are lyrics that inspire and those that disturb. Every song makes you think, feel, move. Berner will no doubt draw an enthusiastic crowd at the Vancouver Folk Music Festival next weekend.

His latest CD, We Are Going to Bremen to be Musicians (2015, Oriente Musik/COAX), was produced by Socalled, aka Josh Dolgin, who also contributes piano and vocals to the recording. The title song is a reinterpretation of the Brothers Grimm fairy tale Town Musicians of Bremen.

“I had an urge to retell that fable,” he told the Independent in an email interview. “At the time, I didn’t know why. I just became obsessed with it. It’s so strange. It’s a kids story about talking animals who are condemned to death but instead run away, with the plan of becoming professional musicians. Then they drive some thieves from their den, and take over the den and all the stolen goods. ‘The End.’ What?”

The animals in Berner’s song, who “people say” are “too used up to be allowed to live,” head to Bremen to be musicians, “to speak of death another day and have a sacred feast with what we stole from the thieves.” The donkey fearlessly leads his small troupe, “realism is something he’s not needing. People talk like they understand the world but they may find, when it kicks them in the head, it’s liable to change their mind.” The rooster, meanwhile, “thinks he can predict the future. Actually, he’s just a rooster. If he could read his own entrails he would see the comfort-giving chicken soup that is his destiny.” Finally, the “dog is full of moral confusion, but the cat is under no illusion. The dog did his killing out of loyalty, and for pay, but the cat knows why he would have done it anyway.” The animals are on their way to Bremen to be musicians: “They’re going to build a statue of us in the square. To commemorate the fact that we were never there.”

Berner told CBC that he thought that his obsession with the story was connected to the loss of both of his parents from cancer within a short amount of time of each other (2013-2014). “Grappling with the story,” he said, “was me trying to find a back door to processing what was going on in my life at the time … contemplating and dealing with mortality of people who were really great parents and very important to me.”

Raised in Vancouver in the Reform and Conservative traditions, Berner’s lyrics, while mostly English, are steeped in Yiddish culture and his style is most definitely klezmer.

“My grandparents spoke Yiddish,” he explained to the JI, “but it was not seen as something worth teaching to their children. So, to a certain extent, I’m trying to reclaim my heritage. We listened to some klezmer music at home and at Hebrew school, and a lot of other stuff, too.

“I originally learned music playing improvised blues piano. I love all kinds of music but, by bringing klezmer into my songwriting, I get to connect with a part of myself that I’d otherwise feel was missing from my life. And I feel strongly that there’s a radical left-wing Jewish culture that deserves to live, as much or in fact more than the nutso Orthodox tradition that represses women and worships a toxic, murderous form of Zionism.”

Berner has strong opinions, that’s for sure, and his songs can be highly critical, no doubt – just ask Gregor Robertson or Stephen Harper, among many others who have made their way into Berner’s discography. But, while he may be tilting at windmills, Berner is trying to rouse action and, with his music, he is trying to do something himself to change the world. Which is why a description of Berner in the Ottawa Citizen as “eternally cynical” doesn’t quite ring true, nor do other similar categorizations.

“I guess I get more of a thrill than a lot of people out of somebody saying flat-out, unvarnished, just how bad a thing really is,” Berner told the JI. “Does that mean I’m a cynic? I don’t know. I like the way George Orwell defined himself, as ‘an independent man of the left.’ That’s how I would define myself, politically. Am I cynical if I believe that a lot of public figures are lying and don’t have the public interest at heart? OK, so be it. Am I cynical if I don’t believe that the narrative of the human story is ‘progress upwards’? OK, so be it. I believe that there’s genuine, eternal divinity residing in the act of fighting the good fight, even if you strongly suspect you’re going to lose. To me, God lives there, so I don’t need optimism in order to feel hope.”

One of the most fun and, at the same time, discomforting songs on Berner’s latest recording is “Dance and Celebrate,” which doesn’t just talk about celebrating the “misfortunes of people we hate” but wishes misfortunes on people, and lumps together the likes of Joseph Stalin, Margaret Thatcher, Ariel Sharon and Harper.

“That song is more about allowing yourself to feel so-called ‘negative’ emotions like, for instance, white-hot, burning hatred, without judging yourself,” Berner explained. “I’m a big believer in that. What you then do with those feelings, that’s another thing. I think the Irish peace process is a good model for other conflicts because, in that case, instead of demanding a utopian, inhuman level of forgiveness from enemies, it asked less of people. Let’s not worry about whether or not we love each other, or whether or not, deep down, everyone is the same, blah, blah, blah. Let’s just begin by not actually killing each other – today. Then take it from there. If we acknowledge our real emotions, truthfully, maybe that’s a better way to begin improving the situation than to ask for the moon.”

Realism – unnecessary to the Bremen-headed donkey and so many of us – is at Berner’s core, and it sets him apart. A Georgia Straight article earlier this year was headlined, “Geoff Berner finds the humor in being a Lotusland outsider.”

“I don’t know if I really am on the outside – I have loads of privileges – but I feel like I’m on the outside,” he told the JI. “I feel apart from this culture that we’re living in, which seems floridly insane to me. In this world, there are half the birds that there were the year when I was born. Half the birds are gone. It doesn’t seem to matter to anyone. People go to plastic surgery and pay thousands of dollars to cut themselves up to look more like magazine covers. Christmas. Weddings. ‘Camping.’ What the hell? None of the things that seem central to this culture make any sense to me. I need an alternative culture to belong to, so I don’t just feel like everyone else is right and I’m a monster. So, my writing is a way to try to be part of building that. The feedback I get is that some people appreciate it. And, of course, some people don’t.” 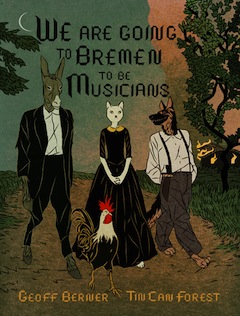 Many people have appreciated We Are Going to Bremen to be Musicians, it seems. In addition to the recording, Berner created a book of the tale, with illustrations by Tin Can Forest. Tin Can Forest Press’ first printing of it, published in 2015, sold out; the second printing will be available next month.

Berner has also written a novel, Festival Man (Dundurn Press, 2013) – wherein “[m]averick music manager Campbell Ouiniette makes a final destructive bid for glory at the Calgary Folk Festival” – which was well received, and he has a second novel on the way, called The Fiddler is a Good Woman, expected in late 2017.

On Berner’s website, the Bremen story is described as “an absurd tale of irrational hope and optimism in the face of horror, and that’s where the story connects with the songs on the album.” Berner describes the album “as a compendium of strategies against despair.”

He’s right – as serious as Bremen is, it’s uplifting. There is much humor, as song titles such as “I Don’t Feel so Mad at God When I See You in Your Summer Dress,” readily attest, and much with which Vancouverites in particular will relate – take the song “Condos,” for example. And where else will you hear David Bowie’s “Always Crashing in the Same Car” in Yiddish?

Berner is one of more than 60 performers scheduled to perform at the Vancouver Folk Music Festival this year. The festival, which takes place at Jericho Beach July 15-17, also includes Israel’s Yemen Blues with Ravid Kahalani. For a 2011 interview with Kahalani, click here. For the full lineup and tickets of the folk festival, visit thefestival.bc.ca.