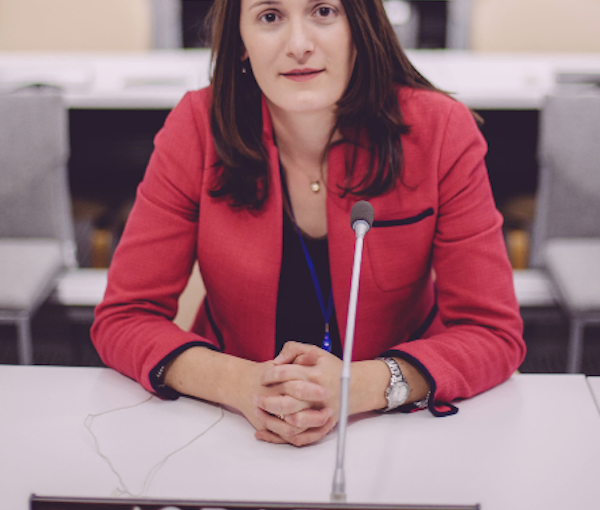 Aviva Klompas came close to writing a declaration of war. In early 2013, after an Israeli post was fired upon by Syria – one of a number of attacks – Klompas was tasked with penning a condemnation that would be submitted to the United Nations.

Still relatively new as director of speechwriting for Israel’s Permanent Mission to the UN in New York City, she recalled the criticism she received: “Be more direct. Be more assertive about things,” she was told. “I thought to myself, ‘channel outrage.’ I tried to do so. I wrote this very stern letter, and I took it to the ambassador to review.”

Klompas, who spoke with the Independent recently, said she then learned the art of diplomacy, and how words might set off an international firestorm.

“To be clear,” Ambassador Ron Prosor, then Israel’s permanent representative to the UN, told her, “you don’t have any authority to declare war.” And it was off to a rewrite.

Thankfully, there weren’t any other close calls, but there are many other fascinating stories – many of which Klompas has brought to light in Speaking for Israel: A Speechwriter Battles Anti-Israel Opinions at the United Nations (Skyhorse, 2019). The book is a candid examination of how the Israeli delegation – and Israel as a whole – is perceived and treated in the international body. 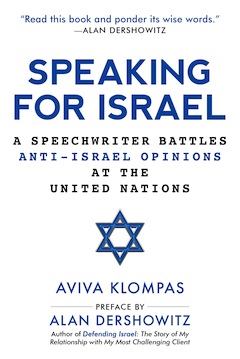 During Klompas’s time at the UN, several major events occurred, including but not limited to the Iran deal, countless anti-Israel resolutions, Palestinians’ bid to join the International Criminal Court, the kidnapping and murder of three Israeli teenagers, and 50 days of war between Israel and Hamas in Gaza. She wrote the book, she said, to show the tireless work of those who advocate for the Jewish state and who rarely get their due.

“It always feels like it is an uphill battle by the nature of the bias at the UN,” she said. “There are people who show up every single day and never say, ‘Why are we doing this? We should leave the UN.’ I’ve never had a single colleague make that suggestion. They came to work and did the job. I think, it’s a little bit my story, but it’s really our story.”

About her work, the Toronto native said it advanced Israel’s policies and informed public opinion. Being successful at it, she said, required overcoming some challenges. For one, there was a culture clash.

“Certainly, Israelis are much more direct in their feedback, which is for better or for worse. At first, it is startling, but then you get to understand that it’s not personal,” she said.

Learning how to write in someone else’s voice was difficult, too. Prosor has “a very distinct style,” she said, describing him as “extremely articulate, funny, charming and intelligent. To be able to write for somebody like that takes time.”

In addition, Prosor took a different approach to diplomacy, when “so many speeches can be dry and not entirely lively,” said Klompas. “He’d be all too happy to break out into song in the middle of a speech, whether it be a song about African nations, which got him a standing ovation from some of the African nations in the General Assembly, [or] he would sing John Lennon’s ‘Imagine.’ In a speech about women, he sang Aretha Franklin’s ‘Respect.’”

Klompas gave him the nickname “the Singing Diplomat.”

“Ambassador Prosor felt it was very important to be heard and, to be heard, you have to be different,” she explained. “He knew he had to capture attention to get people to listen.”

In the beginning, she would have to write up to 20 drafts of a speech before she got a sense of the ambassador’s voice and style. Sometimes, there wasn’t much time to tweak.

“It’s pretty stressful,” she said. “You can get a phone call any time of day or night, weekend, and be told the Security Council is convening a special session, come down to the office, we have to get writing. You could have a couple of days’ notice or a couple of hours’ notice. And emergency sessions tend to get a lot of publicity.”

Klompas, who is now associate vice-president of Israel and global Jewish citizenship at Combined Jewish Philanthropies in Boston, said there were poignant takeaways from her job as a speechwriter.

“You can’t be easily deterred by situations that seem unfair or unreasonable. You need a courage of conviction to deflect the constant attacks and brush aside the fact that systems and processes aren’t as simple as one might hope,” she said. “I’d say that my experience gave me a greater sense of what happens behind the scenes in international diplomacy, and the ways in which Israel is working to find equality in the family of nations.”