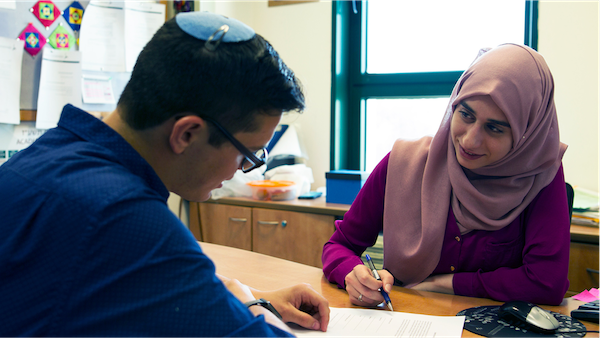 The Jerusalem Business Development Centre (known in Hebrew by the acronym MATI) makes a direct contribution to shared living, and two leaders of the Israeli organization will visit British Columbia next month. (photo from CFHU Vancouver)

Shared living in Jerusalem takes many forms and, even during periods of unrest and tension, shared living continues for many people in the city. In the public spaces of Jerusalem, you will find Arabs and Jews and many others. They share the same spaces but they rarely have meaningful interactions and they often don’t even share the same language for communication.

The challenge of building bridges, trust and communication between diverse population groups has been one of the mandates of the Jerusalem Foundation since its establishment. For many years, it has created new community centres, cultural venues and parks and schools for all neighbourhoods across the city, working to ensure that equal access to services and leisure could be achieved.

The foundation supports programs for learning Arabic in Jewish schools and Hebrew in Arabic-speaking schools, assisting Jewish and Arab women in creating art together, in increasing their skills and employment opportunities, in finding ways for Jewish and Arab children to learn together, to play together, to understand what they have in common and not what makes them different.

Jerusalem is home to the Hebrew University which, like the city, encompasses students from a mosaic of religions, languages, ethnicities, cultures and socioeconomic backgrounds. The university leadership understands that this rich diversity is a precondition for academic excellence, critical examination, intellectual stimulation and the cultivation of the next generation of Israeli and regional leaders. Over the past decade, Hebrew University has devoted considerable efforts and resources to social and academic inclusion, as well as support of traditionally underrepresented populations.

The Israeli public elementary and high school system is separated for Arab and Jewish youth, as well as for religious and secular Jews and many places of residence are homogenous. Campuses, therefore, have great potential for shaping students’ perceptions and views regarding fairness, diversity and inclusion. Indeed, a positive campus experience will motivate university graduates from all groups in society to work alongside those from other groups in the workforce and to function as agents of change in their communities.

There are many challenges to shared living in Jerusalem, yet both the Jerusalem Foundation and Hebrew University believe that the diversity of Jerusalem is the city’s greatest asset and creates the resilience and strength needed to face all challenges for living together.

The Jerusalem Business Development Centre (known in Hebrew by the acronym MATI), which was founded by the Jerusalem Foundation in 1991 to strengthen and develop small businesses and entrepreneurship in the city, makes a direct contribution to shared living. The centre focuses on the city’s weakest economic populations: new immigrants, the ultra-Orthodox and East Jerusalem residents. Each year, MATI Jerusalem helps thousands of entrepreneurs and business owners create or expand businesses in the city, thus aiding in the creation of thousands of new jobs and advancing the city’s overall economic development.

A joint project of Hebrew U and the Asper Innovation Centre, together with the Jerusalem Foundation and MATI, sponsored microloans for women in East Jerusalem and led to the establishment of a full-time MATI centre in East Jerusalem.

Hebrew U established the Al-Bashair Program for Excellence in East Jerusalem, with the Jerusalem Municipality, as a leadership program for excelling students at the university from East Jerusalem. They attend a two-year program that includes leadership skills, internships, tours and career support. Al-Bashair for High Schools aims to prepare excellent high school students (grades 10-12) for higher education.

On Oct. 27 and 30, the Jerusalem Foundation of Canada and Canadian Friends of Hebrew University will bring the women leaders from MATI to Victoria then Vancouver, to tell their story and, through them, the story of Jerusalem. Michal Shaul Vulej, deputy chief executive officer, and Reham Abu Snineh, East Jerusalem manager, will speak about their experiences in East and West Jerusalem, and working to help empower and support underserved communities in workforce development and business opportunities. Their visit across Canada is sponsored by the Asper Foundation. In Vancouver, the visit is organized in partnership with the Jerusalem Foundation, CFHU and the Jewish Federation of Greater Vancouver. 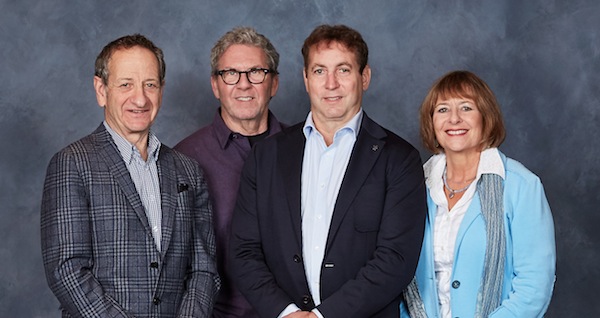 The Canadian Friends of Hebrew University has received $5 million from the Asper Foundation. This gift upholds a tradition of exceptional philanthropic support and collaboration between the Asper Family, based in Winnipeg, Man., and the Hebrew University of Jerusalem Israel (HUJI). It will allow Asper HUJI Innovate to expand its footprint and professional-led startup accelerators to develop significant external partnerships.

The Asper Foundation was founded in 1983 by Israel Asper (1932-2003) and Babs Asper (1933-2011), who believed that philanthropy is a driving force behind positive change in people’s quality of life. It supports major initiatives in the areas of Jewish charity, as well as culture, education, community development and human rights locally, nationally and internationally.

A portion of the recently donated funds will be used to establish an annual Asper Innovation Prize, valued at $35,000 US. The prize will be awarded during a juried competition, intended to encourage and recognize outstanding and promising student-led startups. The public event will also be used to showcase the university as a central force for global innovation within the Jerusalem ecosystem. (Jerusalem is currently ranked sixth in the new Global Startup Ecosystem Report).

“It was the entrepreneurial spirit and wisdom of our late parents, Israel and Babs, that established ties with the Hebrew University close to 60 years ago. We are very proud of our longstanding partnership and connection to innovation that began with the creation of the Asper Centre for Entrepreneurship in the Jerusalem School of Business Administration, in 2001,” said Gail Asper, president of the Asper Foundation. “We are excited to witness, through Asper HUJI Innovate, new generations of students and academics lay the groundwork for advancing ideas, for generations to come.”

The Asper HUJI Innovate platform encourages the entire university community, including students, faculty and alumni, and the Jerusalem community at large to develop their innovation and entrepreneurial capabilities. Established in 2018, it was created as a platform to ensure that graduates are best prepared for the challenges brought about by disruption, inherent in an evolving workplace.

“The HUJI Innovate program is highly prized by the entire university, and the Asper Foundation’s agreement to name and support the centre will surely lead to a great leap forward in the Hebrew University’s entrepreneurial enterprises,” said Prof. Asher Cohen, HU president.

The Hebrew University itself was founded in 1918, and officially opened its doors in 1925. It is ranked internationally among the 100 leading universities in the world, with six campuses, 200 majors and programs, and more than 5,000 courses.

“For over 100 years, the Hebrew University of Jerusalem has upheld the vision of its founders, including Albert Einstein, Martin Buber and Sigmund Freud, being at the forefront of creating Israel’s most significant and cutting-edge research, leading to inventions that serve our global community,” said Rami Kleinmann, president and chief executive office of Canadian Friends of Hebrew University, which was founded in 1944 by Canadian philanthropist Allan Bronfman.

CFHU provides support for the Hebrew University of Jerusalem to maintain its standing as one of the world’s leading academic research institutions, as well as aid in its continual pursuit to impact real change. CFHU is headquartered in Toronto and has six chapters across Canada, including here in Vancouver.

“This incredible gift will positively impact thousands of students, faculty and alumni,” said Kleinmann, “essentially shifting the course of research and engagement between the university and myriad business communities at large – it is extraordinarily profound.”