Raised by American parents in Montreal, Adam Gopnik moved, with his Canadian wife Martha, to New York City in the 1980s. There, he began a career as an art critic, editor and writer for such publications as GQ and The New Yorker, and with Knopf publishers. At the Stranger’s Gate: Arrivals in New York (Knopf, 2017) is his chatty memoir of those years.

There are many figures from the art and publishing worlds in this book, appearing in harmlessly gossipy anecdote after name-dropping anecdote. Gopnik is an amusing artist of the character sketch, as shown in his depiction of his wife.

“Someone once called her in print the most innately polite person she had ever met, and the truth is that in each of us natural sociability had been overlaid with Canadian politeness, and hers with a further code of Icelandic courtesy, producing a veneer of politeness so extreme that many took it for disingenuousness – which of course, in another way, it was.”

He can also neatly capture entire generations through their relationships to something inanimate.

“My grandparents had belonged to a check-cashing generation, proud to be engaged in it,” he writes. “To have an institution as large as an American bank in effect endorse their signature on a little bit of paper as equivalent to money meant to be taken seriously as a citizen. My parents, in turn, were credit card cultists – they loved having them, signing them, showing them, using them. For those who came of age in the boom times after the Second World War, the whole notion of credit, of sharing in a limitless improving future – of being trusted to buy now and pay later, since later would be so much richer than now – had some of the same significance that the notion of being trusted with checks had for my grandparents.

“We, in turn, generationally, had regressed, I realized,” he continues, “back into a cash economy – we used checks just to pay the utilities. The [bank] machines were one more instrument of that infantilization; we went to the machines for something that felt, at least, like our allowance.” 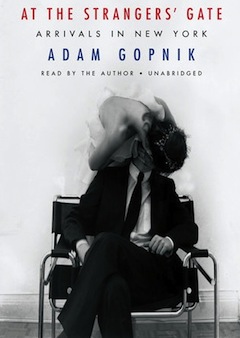 As much as the individual characters who inhabit the pages, the protagonists are often the miniscule homes the Gopniks inhabited – and the insects and rodents with whom they cohabited. He credits their first tiny apartment, at least in part, for their marital contentment.

“One reason we didn’t fight was that the studio was so small, so small that you could never get sufficient perspective for the fighting to happen. In order to really have a quarrel, you have to sort of step back three steps and eye the other person darkly. There was just no room for that. We were on top of each other, not in that that sense – well, in that sense, too, at times – but we were also colliding with each other all the time. I don’t have any mental image of Martha from those years, except as a kind of Cubist painting, noses and eyes and ears.”

A later loft apartment seemed too sweet to be true in a New York of radically rising rents, a suspicion that appeared fulfilled when thick, dark liquid began dripping from the ceiling.

“For the next two weeks, the ceiling kept hemorrhaging,” Gopnik writes. “Sometimes, we would wake up and find it dripping slowly, slowly. At other times, it would really be coming down, as though a whole new vein had been opened, or else as though – and this thought struck us both about the same time – a new corpse had just been stowed away under the floorboards upstairs.”

“That’s not blood,” a neighbour told them, “it’s just molasses.”

The building had been a candy factory at the turn-of-the-century and for inexplicable reasons it would sometimes ooze ingredients. Gopnik decided to find this charming: “It was thrilling, like the moment when they opened up the Dead Sea Scrolls and found them pristine. Sugar syrup from a century ago, bubbling out of the walls, and still so sweet.… I felt happy; I was living on the big Rock Candy Mountain.”

The couple were less charmed by another discovery. A pest control officer announces: “You got them, all right. You got the big boys. You got the super-rats.”

“What do you mean, the super-rats?” Gopnik asks.

“‘Well, let’s put it like this,’ He thought for a moment. ‘These rats, if you see one, they look at you like you the problem.”

Leaving the apartment, Gopnik homes in on two of the phenomena of the 1980s that impacted his life in the Big Apple.

“The two great technological gifts of the ’80s were the Walkman and the hyper-developed sneaker, which, together, turned walking into an all-encompassing emotional activity,” he writes. “For a long time in the 1980s, I seemed to do nothing but walk around Manhattan. The modern sneaker, rising from Nike and Adidas, constructed with more architecture inside than most apartments, now allowed even the flat-footed to stride, Hermes-like, on what felt like cushioned air.… And then the Walkman made every block your own movie.”

Eventually, like rats in a too-small apartment, the couple became overwhelmed by the city and they left to raise a family where there are lawns and gardens.

This is a highly sentimental book, which is not a bad thing, especially for a New York-o-phile. Some shortcomings are too-frequent hackneyed phrases (“dense as a hockey puck,” “impossibly beautiful women”), the oddly repetitive use of some esoteric words and a style that sometimes evokes Lake Wobegon, Minn., more than New York, N.Y. In other words, it’s a cute book, which may sound like faint praise, but, given current events, that can be a refreshing break.