Paul Shore gets a little help from his daughter at a recent book signing. (photo from Paul Shore)

Cultural pastimes, like pétanque, “recharge our joie de vivre, our delight in being alive; they free our minds; and they fuel our chutzpah for adventure. We must protect these beautiful little gifts, tie a bow around them, love and keep them safe,” writes Paul Shore in Uncorked: My Year in Provence Studying Pétanque, Discovering Chagall, Drinking Pastis and Mangling French (Sea to Sky Books, 2016). 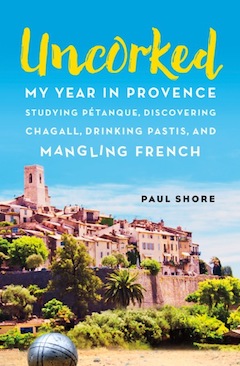 The title pretty much describes the basic content of this delightful 164-page book, and gives a hint of the light touch with which Shore writes. His story will make readers reflect on their own pivotal life journeys, if they have been lucky enough to have them. Perhaps it will also make us recommit to what we’ve learned from such experiences – the need to stop and smell the proverbial roses, for example, and the joy and fulfilment that can come from opening ourselves up to new places, people, cultures – the list goes on.

It was his job that took Shore to Saint-Paul in 1999. When the Vancouver-based software company with which he worked opened an “outpost in the Nice area” of France – with him “as its sole initial employee” – he leapt at the opportunity. Telling his firm he wanted to live in a “cute small town,” he found himself in Saint-Paul de Vence.

“Little did I realize,” he writes, “that I was about to take up residence in a village that could be best described in summer as ‘gaudy tourist central’ because it was so famous and magical…. Nor did I know that the brilliant modernist painter Marc Chagall had lived, worked and was buried in my soon-to-be-surrogate hometown. Nor did I have a clue that Saint-Paul was tantamount to a holy site for an odd game called pétanque.”

“I lived in Saint-Paul for almost exactly one year – from January 1999 to late December 1999,” Shore told the Independent. “I had visited Nice the year before on a short business trip and dreamed about the possibility of someday spending a longer stint in the region. And I had been in the south of France years earlier, in 1990, as a Euro-Railing new university grad.”

Shore grew up in Ottawa, but has called Vancouver and its environs home for many years. He, his wife, Talya, and their two children have lived in Whistler since 2003.

“We are longtime members of Temple Sholom,” he said. “In Whistler, we get together with Jewish friends for major holidays and we visit Temple Sholom and family in Vancouver from time to time, too.”

There are a few Jewish terms and references in Uncorked and a pivotal exchange between Shore and a woman named Adele, the manager of an art gallery in Saint-Paul – she is the one who informs Shore that Chagall had lived and painted in the village. She also shares with him that Chagall was a Russian Jew and that she, too, is Jewish and her family came from Russia. “Comme ma famille [Like my family],” writes Shore, who explores his heritage further in the latter half of the book.

While there are various entertaining and touching tangents, the focus of Uncorked is Shore’s quest to learn the mysteries of pétanque, which he describes “for the uninitiated,” as looking “a little like the Italian game of bocce, or the British game of lawn bowling, or even the winter sport of curling that is popular in Canada,” though, he advises readers “not to suggest such similarities out loud while standing on French soil, unless you have no desire to try to play the game, no desire to be welcomed into a café, no desire to gain the friendship of a local, and you desire to have the nickname Monsieur Con – the polite translation of which is ‘village idiot.’”

Shore was determined to “gain entry into the arcane world of this ancient game with its half-understood rituals and ancient codes.” With help from a friend (Hubert) and a lot of practise, he works his way up from spectator to furtive nighttime learner to solid daylight player to confident owner-of-his-own-ball-set player. He knows he has been accepted fully into Saint-Paul life when he is invited into Le Cercle (The Circle), “the private bar that was off limits to everybody except registered pétanque players of Saint-Paul,” and receives his member card.

Unfortunately, by that time, his work was going to need him back in Vancouver. In talking with one of his friends in France a couple of weeks before his return to Canada, Shore vows, “I’ll swim in the fast lane awhile longer … but not forever … France has taught me it’s not worth the personal sacrifice.”

“When I returned to accept a new role with Broadcom in Vancouver, I unfortunately couldn’t swim in a slower lane for the seven years I stayed with the company,” Shore admitted to the Independent. “I worked ridiculously hard, traveled too much for business, while being within the core of the high-tech industry and spending a lot of time in Silicon Valley during those years. It was exciting and I learned a lot, but it troubled me that I wasn’t able to apply what I had absorbed during my year in France about living a well-balanced lifestyle…. Since I departed Broadcom in 2007, I have lived differently – working hard in intense environments at times, though not for long periods of time and with far more varied interests and time off to vacation and to help raise a young family.”

For the past year, he said, “I’ve been doing a little business consulting, while focusing on marketing my book and pursuing new interests in the renewable energy world. I also manage a vacation rental property that we own on the northern Sunshine Coast in the town of Lund – we call it ‘The Shores at Lund.’”

He has returned to Saint-Paul with his wife a couple of times. “And we plan to visit again next June – the first time with kids, ours are 9 and 5,” he said. “I will definitely bring my pétanque balls back to play there again. I have always stayed in regular contact with Hubert, even though I haven’t seen him in person since 2006. I have a couple other French friends who I speak to less often, though we also stay in touch – one now lives in Montreal and we have seen her a few times over the years.”

Shore has played pétanque in Whistler on Bastille Day, though not lately. “I will definitely teach my kids,” he said, “once they can safely handle the heavy metal projectiles.”

As for his motivation to write this book almost 20 years after his stint in Saint-Paul, Shore said, “I have wanted to try my hand at writing for ages, though I never seemed to make the time. On the flight home in 2003, I made some notes about my year in France four years earlier, just so I wouldn’t forget all the humorous and fond memories. Those notes sat in my desk drawer at home until the spring of 2015 when I had a surgery that caused me to be immobile for several weeks. My wife brought me the notes to my lawn chair in the middle of the living room and told me that now was the time to write – and so it began.

“I wrote a lot for about two months and then set it aside until the next spring, when I departed a job and had a health scare around the same time. I then picked up the writing again, determined to finish. I didn’t know if I’d ever publish it, until I was with a friend named Joel Solomon at a workshop at Hollyhock (on Cortes Island) and he encouraged me to get it out there one way or another. Joel introduced me to a small firm, named Page Two Strategies (co-founder is Jesse Finkelstein), who I hired to assist me with the pursuit of a self-publishing path.”

“I encourage people to pursue challenges and not to accept ‘no’ for answer,” he said. “‘Why not try?’ is a philosophy that I have attempted to live by for my entire adult life.”