NBOS is an ensemble in residence in the humanities division at the University of Chicago. The group has released three CDs: Dancing on the Edge of a Volcano: Jewish Cabaret Music, Popular and Political Songs, 1900-1945 (Cedille Records 2002) and Jewish Cabaret in Exile (Cedille Records 2009), as well as a CD to accompany the book Jewish Musical Modernism, Old and New (University of Chicago Press 2008), which is edited by NBOS artistic director and narrator Philip V. Bohlman.

Bohlman is the Mary Werkman Distinguished Service Professor of the humanities and of music at the University of Chicago. According to his bio, “The study of Jewish music in modernity has provided a primary focus for his research for 35 years and, since 1998, has provided the context for his activities as a performer…. His work in historical performance has been recognized with the Noah Greenberg Award from the American Musicological Society and the Donald Tovey Prize from Oxford University.” 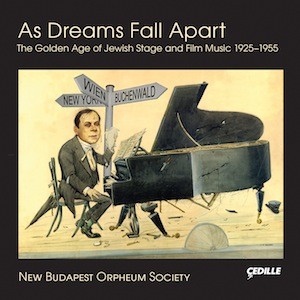 As are their previous CDs, As Dreams Fall Apart is both an esthetic and academic effort. The CD booklet includes a lengthy and fascinating essay by Bohlman on sound in film, which, of course, has as its origins the stage. Bohlman takes it to the Jewish cabaret stage specifically.

“In history’s very first synchronized sound film, Alan Crosland’s 1927 The Jazz Singer, the title character, Jakie Rabinowitz takes to the stage as Jack Robin, enacting and envoicing the struggle between Jewish tradition in Samson Raphaelson’s original play, The Day of Atonement, and the dreams of stardom awaiting him in the jazz clubs and vaudeville stages of New York City,” writes Bohlman. “The (real life) jazz singer’s musical transition from stage to film formed at the confluence of real-life transitions for European Jews at the beginning of the 20th century – migration from rural shtetl to urban ghetto, immigration from the Old World to the New – and of allegorical transitions – from religious orthodoxy to modern secularism, from diaspora to cosmopolitanism. As the old order of European empire collapsed in the wake of World War I, the Jewish musical traditions that had metaphorically represented its political and ideological boundaries … gathered new metaphors: those of modernity and modernism, ripe for the tales that would move

from the skits of the cabaret stage to the scenes filling the frames of sound film.”

As Dreams Fall Apart features the work of numerous composers, including Hermann Leopoldi, Hanns Eisler and Friedrich Holländer. The melodies and lyrics range from lively and humorous to sombre and serious. The songs take listeners from a traditional world to dreams of a better future through the tragedy of the Holocaust and, finally, to a more tempered hope in the aftermath of the war.

“Yiddish film musicals were the product of musicians and music on the move, a process of triangulation that witnessed the journeys of actors and directors from the United States, and musicians from Vienna and Berlin, all of whom would gather in Poland for the filming and production of films in the Yiddish studios of Warsaw and elsewhere in Poland and Lithuania,” writes Bohlman. And this movement is reflected in the CD, which starts with a section called On the Shores of Utopia, and the song “Die Koschere Mischpoche” (“The Kosher Family”) – the “opening verse of the original street song in Viennese dialect.” Dream sections follow, with songs like “Wir Ladies aus Amerika / We Ladies from America” and “Composers’ Revolution in Heaven” (which has Chopin, Wagner, Beethoven and Bizet in heaven, angry about all the people on earth making money from their music), before dystopia sets in (“Theresienstadt Potpourri – Aus der Familie der Sträusse / From the Strauss Family”), to be replaced by dreams of Hollywood that quickly fade, to the 10th and final section, From the Ruins of Dystopia, which features three songs by Holländer – and famously sung by Marlene Dietrich – in the Billy Wilder film A Foreign Affair (1948), which was set in Berlin.