I had the privilege of seeing Mark Leiren-Young’s play Bar Mitzvah Boy when it premièred at Pacific Theatre in 2018. It was funny, edgy and insightful, and well-acted by Gina Chiarelli and Richard Newman. It contained a lot of local references, making it even more special. 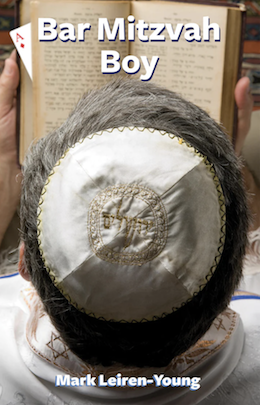 What I see from the Playwrights Canada Press edition, which was published in 2020 and arrived at the JI sometime in 2021, is that Leiren-Young’s notes on various aspects of the play allow productions to change certain references and pronunciations to localize the action, thereby making it special no matter where it is performed. For instance, the audience first meets Rabbi Michael Levitz-Sharon, who is in her mid-30s to maybe 45 years old, on a jogging path, “dressed in sweats and a ball cap for a local sports team.”

The next scene: in the rabbi’s office, there sits a man in his mid-60s or older, Joey Brant, “decked out in prayer regalia – including tefillin, which are on incorrectly.” This is our first hint that he, despite initial appearances, is not a rabbi or a religious Jew. When Michael arrives, Joey assumes that the relatively young woman in running gear doesn’t belong at the synagogue – and certainly isn’t the congregation’s spiritual leader. This exchange sets the tone for the essentially two-person play that unfolds. The other cast member is Sheryl, the receptionist, who is never seen, only heard. As described by Leiren-Young, the actor of this role (which was Jalen Saip in 2018 at Pacific Theatre) should have “the accent you want the woman who runs your local deli to at least pretend to have.”

I love having these types of stage direction “made public.” It is a completely different experience to read a play than to attend it in person. It’s almost like listening to the acoustic version of one of your favourite pop musicians – if they are able to sing on key and play their chosen instrument skilfully, they really are excellent at their craft. Similarly, if the words of a play still make you laugh and cringe and move you emotionally in other ways, with no cues from actors or audience members, it is a very well-written play. Bar Mitzvah Boy in book form made me do all those things – I chuckled a lot throughout, and also got teary near the end. Michael and Joey (the bar mitzvah “boy,” btw) are both dealing with some serious, raw issues.

Since I finished the book, I’ve been revisiting some of the many topics it covers. I’ve thought about my own beliefs about Judaism and faith, what happens after we die, what makes a good friend, parent or spouse, how people navigate challenges differently, the ways in which a congregation (or any other group) can be both supportive and trying at the same time.

Leiren-Young dedicates the publication to his mother, Carol Leiren: “I guess it was worth sending me to Talmud Torah.” For viewers or readers of Bar Mitzvah Boy, it certainly was worth it – thank you.