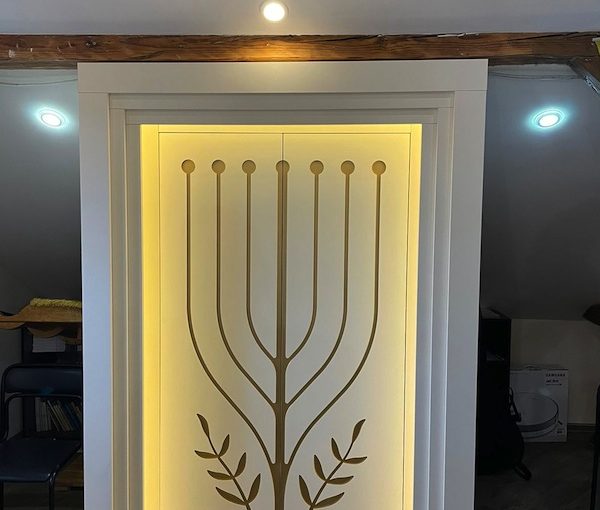 The Masorti synagogue in Chernivtsi Ukraine has become a refuge for Ukrainians fleeing the war. Its new aron kodesh, built by grateful refugees, has become a symbol of the partnership being forged between small, out-of-the-way communities and those fleeing for safety. (photo from Schechter Institutes Inc.)

As the war in Ukraine continues, educational and religious organizations that helped support the country’s fledgling Jewish communities are finding they have a new mandate these days: to help the millions of refugees that have been left homeless by the Russian invasion.

More than 12 million people have fled their homes in Ukraine, eight million of whom are internally displaced. According to a May 5 report by the United Nations Office of the High Commissioner for Human Rights, most of those affected are women and children. In many cases, the refugees have either lost family members in the bombings or have been separated from loved ones. A significant number are struggling to find shelter, food and resources.

Schechter Institutes Inc. president Rabbi David Golinkin told the Independent that synagogues and Jewish day schools have become refuges for Jews and non-Jews alike in recent months. The institute’s educational program, Midreshet Schechter Ukraine, which partners with Masorti Olami, provides funding and educational services for Conservative communities in Ukraine. Golinkin said three of the four Masorti (Conservative) synagogues are located in regions that have been hit by bombing, including in Kyiv, where Schechter had just opened a facility in January.

Golinkin said the two nonprofits had spent more than a year finalizing the purchase of a building that would be big enough to house a sanctuary, as well as a full array of youth programs and services. Two weeks after purchasing the property, however, Russia invaded Ukraine, forcing the community to suspend the opening. As Russian troops advanced toward Kyiv, community members were urged to leave the city. Some congregants sought refuge at the Masorti synagogue in Chernivtsi, near the Romanian border, while others headed out of the country to Poland, Moldova or Romania.

Three months into the war, the Chernivtsi synagogue, tucked away in southern Ukraine, has become known for its hospitality toward those fleeing the conflict. A steady flow of refugees fills the city every day, many turning up at the Masorti facility looking for a bed or a meal. Others head to the Chabad House located nearby. Golinkin said the two organizations have learned to work together, and will refer refugees to the other community when their own facility is full. No one is turned away, whether they are Jewish or not.

Schechter and Masorti Olami also work with partners across Western Europe, Israel and North America to help Ukrainians who are seeking refuge outside of the country. Rabbi Irina Gritsevskaya, who serves as the executive director for the educational programs of Midreshet Schechter and oversees programs in Ukraine, said hundreds of refugees have relocated to Israel, Berlin and other places with the help of Masorti congregations across Europe. She said the most moving example was the rescue of a teenage boy from eastern Ukraine whose parents had died. Volunteers made the 1,000-kilometre trip through war zones to bring him to Chernivtsi.

“[It] was a terrifying experience for him,” Gritsevskaya said, “since it took three days without basically sleeping or eating [to reach Chernivtsi]. Finally, with a lot of help from the Israeli government, we managed to bring him [to Israel].” She said he seems happy with his new home and his new school. “He always wanted to come to Israel,” she said.

Cities in eastern Ukraine are still hemorrhaging populations, driven by the escalating war in border cities and villages. Yuri Radchenko, who leads the Masorti synagogue in Kharkiv, is the director and co-founder of the Centre for Inter-Ethnic Relations in Eastern Europe, a think tank of researchers who specialize in Eastern European and Jewish history. He said most of the members of his small synagogue were able to flee the city. A few chose to remain behind.

“Some teachers [have] elderly parents who are … unable to move from the city,” said Radchenko. He estimates that 30-50% of Kharkiv’s two million residents escaped before the Russians captured parts of the city, which has been heavily damaged from Russian shelling. Many residents sought cover for months in Kharkiv’s fortified subway and other makeshift shelters. Recent estimates suggest at least a quarter of Kharkiv’s residential housing has been destroyed, along with crucial infrastructure.

Still, Radchenko said many who fled the country hope that they may one day be able to return home. “People understand that it is hard to make a change,” he said, noting that immigrating to another country often means starting at a lower employment level in an unfamiliar culture. He speculated that some residents will follow the example of other postwar populations and return to rebuild their city if Ukraine wins the war. And, indeed, many of the residents who sought shelter in Kharkiv’s underground shelters are gradually returning home to repair their apartments and clean up the rubble.

Radchenko said he can empathize with them. Much of his own work was put on hold when he was forced to flee. “I would come back to Kharkiv,” he said definitively. “[If] I could move back, I would not wait. I think I would visit to see how it looks like, but I would come back if my apartment and the district where it’s located were safe.”

For now, Schechter and Masorti are taking the long view of the war. Russia’s continuing attacks mean increased risk to civilian populations, more refugees on the run and more uncertainty. The conflict also means an even greater need to bolster resources at the Chernivtsi synagogue, so that Jews can continue to come and pray, learn and find a good kosher meal there, and refugees can find support. But Schechter and Masorti know that a significant number of Jewish communities in Ukraine will need to be rebuilt. And that will take both time and money.

Schechter’s director of development Michal Makov-Peled said the Cantors Assembly will be hosting an hour-long telethon of music and stories on June 12 to raise money for Schechter and Masorti Olami’s emergency campaign. She said the funds will go toward assisting Jewish communities in Ukraine, as well as increasing support for refugees, which is expected to be an ongoing need, for now.

“We have 11 apartments that we are renting [to refugees in Chernivtsi],” Makov-Peled said, adding that they also distribute food to Jewish communities in Kyiv and Odessa, where residents are slowly returning, but which have been economically impacted by the conflict.

In Chernivtsi, communities are also finding rhythm and a new way of life. Some are exploring ways to expand the small synagogue’s services, others want to pay back the generosity they have been shown. Gritsevskaya said the synagogue now has a new aron kodesh (ark) to house its Torah, built by grateful visitors who saw a need. “Many aren’t members of the Chernivtsi community, but were just passing through,” said Gritsevskaya.

The June 12 Cantors Assembly performance, Mivtza Ukraine, will be aired around the world on YouTube and Facebook. To make a donation or for more information, log on to cantors.org/mivtzaukraine.