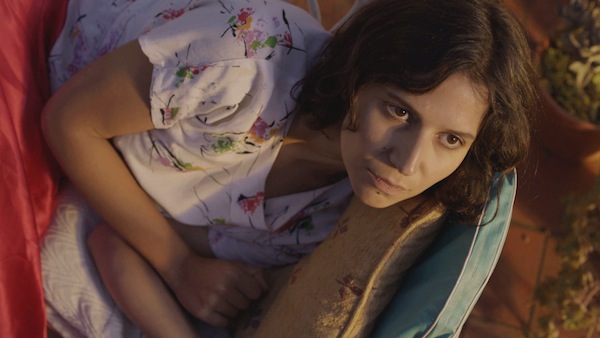 For his first feature film, writer and director Dan Rubenstein has done well. Noemí Gold, which is currently streaming exclusively on Topic, is a quietly engaging story that touches upon serious issues, though never delves into them. While the story is somewhat scattered and doesn’t always make sense, the acting is strong and the glimpse into Argentine culture interesting.

The title role is played by Catalina Beraducci, who is perfect for the part. Noemí Goldberg, 27, has accidentally become pregnant from a tryst with an egotistical artist of questionable talent and character. She is an unassuming person, recently graduating with her master’s in architecture, though she doesn’t appear to have a job. When she seeks a doctor who can perform an abortion – which was an illegal procedure in Argentina until just last month – she has some trouble raising the money she’ll need to go to Uruguay to get one.

Noemí has a couple close friends – eccentric roommate Rosa and party-girl Sol – both of whom help in small but important ways. Also in Noemí’s court is her grandmother, though we find out later in the movie that their relationship has had its complications. Lastly, while all this is going on, Noemí’s cousin, David, comes to visit from Los Angeles, where his family moved when he was 7, for tragic reasons we eventually find out.

David and Noemí were once close, but, for most of the movie, their interactions are strained. David works for an energy drink company and his job is, literally, to post photos on Instagram of himself enjoying the drink in various places and while doing various activities. (He is the only one in the film who has a job, it seems.) Social media plays a prominent role in the narrative as a whole – and, hopefully, younger viewers will take it not only as a representation of themselves in film but as a critique of how much time they dedicate to promoting the fun they are ostensibly having versus actually having fun.

Women’s rights, religion (via a discussion with and seduction attempt of two young Mormon missionaries), what constitutes art (one amusing scene features an objectively poor dancer filming her own performance using a camera on a selfie stick, while being cheered and applauded by an adoring audience), the importance of forgiveness, the challenges of being a good friend, the imperfection but necessity of family, and many other topics run through Noemí Gold. There are no pronouncements and the laidback pace could fool one into thinking there is not much of substance in the film, but they’d be wrong.