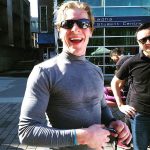 In his first Olympic-distance triathlon, Daniel Meron placed first in the men’s 30-34-year age category. He topped his category in the University of British Columbia Triathlon March 10.

“I did my first triathlon on a whim,” he said. “I take part in a local boot camp called November Project [a free fitness movement that began in Boston and has spread to other cities]. They exercise at Queen Elizabeth Park every Wednesday morning. I started going over the summer and just began to get to know some truly phenomenal people, people who regularly win or place in ultramarathons, which are 100-kilometre runs that take place over two or three days. I thought I would like to try some sort of event.”

Meron regularly cycles about 16 kilometres to work and has been a lifeguard and swimming teacher for the City of Burnaby since 2004.

UBC Triathlon participants were equipped with timing sensors that measured when they began and finished each segment of the competition. Results were not released on the day of the event, and Meron was pleasantly shocked when he checked his results online.

“It came as a bit of a surprise,” he said. “It was obviously a huge accomplishment just doing an Olympic distance for the first time and so, honestly, winning my age category was just gravy.”

Meron, a UBC alumnus, is a former Hillelnik and served as vice-president of the UBC chapter of the traditionally Jewish fraternity Alpha Epsilon Pi. He is also an actor and acting teacher.

He is slated to do three or four more triathlons in the coming months.