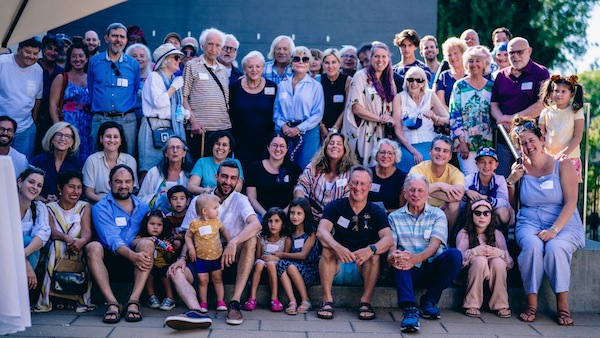 A reunion at Beth Israel synagogue recently brought together branches of one of Canada’s largest Jewish family trees.

The story of this Canadian family began in 1848 with the birth of Wolf Baer Switzer, in Radom, Poland. He fathered 11 children, one of whom was a daughter named Bella.

Bella (Switzer) Singer passed away in 1994, at the age of 104, although the exact date of her birth is not certain. Bella and her husband Abraham Singer came to Canada first in 1905, then Bella and her son Hymie returned to Poland in 1907, while Abraham headed west to farmstead, with the family reuniting in 1910 in Calgary.

In the following decades, Bella and Abraham nurtured a vast Canadian family, including their own four children.

Sensing an ominous future for Jews in Poland, Bella settled in Calgary and then paid for other relatives to follow, with the understanding that once they arrived in Canada, they would be put to work, make enough money and send for another relative. It is estimated that as many as 300 family members were brought to Canada through Bella’s single-minded determination. Given later events in Poland, the number of lives saved is incalculable.

For her efforts, Bella was known as Mema (“Auntie”) Singer to all the family, regardless of actual relationship.

Turning necessity into invention, Bella built a small real estate empire, beginning with a rooming house to accommodate arriving relatives and expanding into apartments and hotels. She lived almost all her remaining life as a philanthropist and pillar of Calgary’s community, coming to Vancouver in her final years to live with her daughter’s family.

Bella had 10 grandchildren, of whom three live in Vancouver: Lola Pawer, her sister Shelley Ail and their cousin Leslie Diamond.

There are “way over 100” of Bella’s descendants living in Vancouver, says Pawer.

The Aug. 21 reunion was for the West Coast members of the family, with guests traveling in from around British Columbia, as well as from California and Hawaii, with a few coming from Alberta. There were almost 80 guests in total, “which is nothing for our family,” said Pawer’s daughter (and Bella’s great-granddaughter) Lisa Boroditsky, who estimates there are about 2,000 descendants of Bella. The first reunion of the extended family, about 20 years ago, took place at one of the Olympic venues in Calgary and attracted about 1,000 people. The last one, in 2016, drew 485 attendees.

Billy Switzer, Bella’s nephew and oldest descendant in Vancouver at 96 (the oldest descendant is Suchar Cyngiser, 98, in Calgary), recalled his family’s arrival in Canada, thanks to his aunt. At the chaos of the port in Montreal, his sister Lily was crying and the parents were speaking in Yiddish. A man approached, asking where they were headed and warned them that Calgary was a multiday journey further. The family assured the stranger that they had saved some carrots and other food for the trip but the man reached into his pocket and handed them $10.

“My father took out a notebook and asked the man to write his name and address,” so he could repay him, Billy Switzer recalled. “The man said, my name is when a Jew needs help, help him.… My father said, what a way to arrive in a new country.”

Reflecting on a century-plus after Bella’s arrival, he concluded: “When you look at our family tree, you will be amazed at what they have accomplished and this all happened because Bella Switzer made it happen by starting and inspiring everyone to get involved. It’s wonderful that grandchildren in Vancouver have made an effort for this family reunion today.”

Billy Switzer’s daughter, Renee Switzer, and another cousin, Jordana Corenblum, along with Pawer, Boroditsky and Cheryl Milner, were the core team that organized the reunion.

Renee Switzer blew up and colour-coded a graphic of the family tree. Name tags correlated to the family branch. There was a family Bingo game and Switzer trivia, as well as plenty of shmoozing.

Boroditsky has plenty of memories of the matriarch.

“She was living with my grandmother,” Boroditsky said. “I grew up with Bella, too…. She was so involved in her great-grandchildren’s lives.”

“She was a woman’s woman before it was even dreamt about,” added Pawer. “She ran a business. She knew dollars and how much things cost. She never learned to read. She was an Orthodox Jew and a magnificent woman. She drove until she was in her 90s.”

Reflecting on Bella (Switzer) Singer and the Canadian family she created, Pawer said: “It’s an honour to be [descended] from her and to learn all the things that she did. She was very philanthropic. How strong this family really is and will continue to be – that’s what she gave us.”