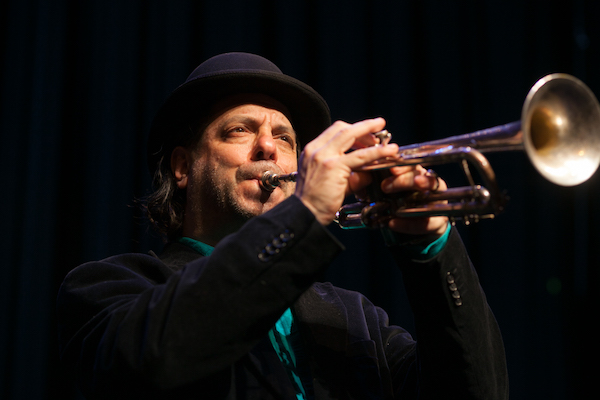 Trumpeter and composer Frank London, an unwavering presence in numerous musical genres for more than four decades, released a new album, Ghetto Songs (Venice and Beyond), on Felmay Records earlier this year. The project incorporates music from around the world and delves into the history of “ghetto music.”

Coming out this past April – to coincide with the anniversary of the Warsaw Ghetto Uprising in 1943 – the concept for Ghetto Songs began in 2016, when the Grammy Award-winning London found himself in Venice on a residency with Beit Venezia, a foundation that aims to promote Jewish thought and culture, and serve as a bridge between people of all cultures and religions.

“It all started with my being invited by Dr. Shaul Bassi and Beit Venezia to go to Venice and conceive a special way to commemorate the 500th anniversary of the opening of the Venice Ghetto, the first segregated urban area to be called a ghetto,” London told the Independent. “The particularity of the Venice Ghetto and the universality of ghettos themselves inspired Ghetto Songs.”

The Jewish ghetto in Venice was situated in the polluted grounds of an ancient copper foundry, or geto. By the early 20th century, the term ghetto came to signify the crowded urban quarters of any minority group.

As London sees it, ghettos are historically complex phenomena. They offer both freedom and restriction, protection and imperilment. By isolating specific groups from the outside world, they become cultural “petri dishes” in which the ghettoized group’s culture can thrive.

Ghetto Songs celebrates the music and poetry that emerges from and about the world’s many ghettos. The playlist for the new release includes 17th-century music and poetry from the Venice ghetto (works from Salomone Rossi, Benedetto Marcello and Sara Copia Sullam); a piyyut (Jewish liturgical poem) from a mellah, a Moroccan Jewish quarter; kwela, street music from South Africa’s townships; and works by Cantor Gershon Sirota, who lived and died in the Warsaw Ghetto. There is also version the 1972 hit by the band War, “The World is a Ghetto.”

When it came to selecting what pieces would be the best fit for an album covering ghetto music encompassing five centuries and numerous locations, London recounted, “This is my favourite part of the process! I do the deep dive: tons of research into music from the world’s ghettos throughout history, across time and place. I pick out songs that I love, but that also tell a story, that inform each other, that complement each other, and that work together as a unified whole despite their incredible differences.”

London has assembled an array of talent for the release. Among the vocalists are tenor Karim Sulayman, Cantor Svetlana “Sveta” Kundish, Yaakov “Yanky” Lemmer (considered one of the best in the new generation of chazzans) and singer/guitarist Brandon Ross. They are joined by drummers Kenny Wollesen and Zeno De Rossi, cellists Francesca Ter-Berg and Marika Hughes, bassists Greg Cohen and Gregg August, and multi-instrumentalist Ilya Shneyveys.

“What might have been seen as challenging – getting the right musicians who can play such a diverse, variegated set of musics, styles, genres, etc., was really no problem. I am blessed to know and work with some of the world’s finest musicians and, with them, there were really no big challenges,” said London. “I have worked with each of these fantastic musicians in different projects and situations – mine, theirs, and as side musicians for others – over my 40-year career.”

To summarize London’s career in the space of an article, let alone a paragraph of two, is not an easy task. Among the artists he has worked with are Itzhak Perlman, Allen Ginsberg, LL Cool J, Mel Tormé, Iggy Pop, John Cale and Jane Siberry. He is a member of the Klezmatics and Hasidic New Wave, as well as leader of the Frank London’s Klezmer Brass All Stars and the Glass House Orchestra, a band that plays Austro-Hungarian Jewish music. London has made 30 solo recordings, is featured on more than 400 CDs and is the recipient of the Hungarian Order of Merit.

The veteran musician is working on several projects at present. These include Ich Bin Eine Hexe, a dance/theatre spectacle about pioneering performance artist Valeska Gert; “Rube G (Music for Brass Trio and Percussion,” a dance score for choreographer and filmmaker Jody Oberfelder; ESN: Songs from the Kitchen, a cooking and music video with Lorin Sklamberg and Sarah Gordon; Salomé: Woman of Valor, a CD with poet Adeena Karasick (jewishindependent.ca/salome-cd-launched); and Transliminal Rites, a CD of improvised music with Eyal Maoz and Guy Barash, who, together with London, make up the EFG Trio.