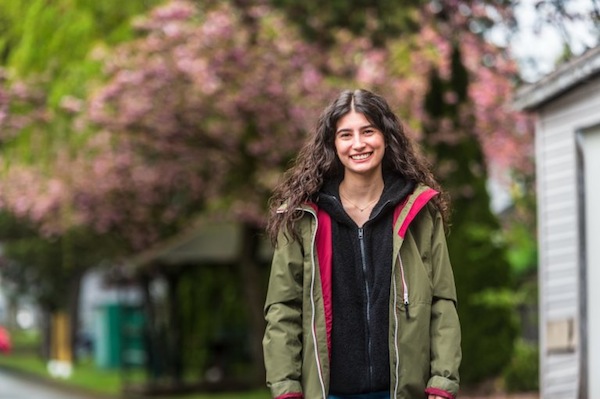 University of British Columbia student Ava Katz has been helping people with errands since the pandemic began. (photo by Paul Joseph/UBC)

First-year kinesiology student Ava Katz commutes to the University of British Columbia from Kerrisdale, where her housemates include her 91-year-old grandmother and a mother with a heart condition. In these extraordinary times, Katz doesn’t want her loved ones risking their health with unnecessary trips to the grocery store. So, in March, she began making those trips herself. As she was transporting groceries home from Save-On Foods, something occurred to her.

Her final exams were just a couple of weeks away. It’s the time of year when most students’ instincts are telling them to clear their schedules of any distractions. Katz’s instincts were telling her to do something else.

She posted a public note on Facebook: “In wake of the spreading pandemic, I would like to offer my services to anyone who is compromised during this time. If you or someone you know is in need of groceries, household items, etc., please contact me directly and we can arrange for me to complete your needed errands free of charge.”

She indicated where she lived and her phone number, assuring people, “I will not enter your homes, only drop items off at the door. Priority goes to elders and individuals with compromised health. Please do not contact me to run errands for you if you are able and in good health.”

She asked readers to share the post. The calls came quickly. Just a couple at first, but more and more as her friends returned from school in the United States and overseas. They all had to self-isolate for 14 days, so they couldn’t do anything for their own grandparents who were shut in. Katz stepped in.

“That was just kind of a no-brainer for me,” she said. “I was happy to do those things, and still am.”

Katz has been shuttling to and from supermarkets and pharmacies all over Vancouver. Each outing brings her into the orbit of people who potentially carry the virus. Katz has heard the stories about the toll COVID-19 takes on its victims. She wears a mask and takes great care not to bring the virus to the people she’s helping.

She still makes the trips for her mom and grandmother, walks her two dogs, and also delivers food between two seniors homes twice a week as a volunteer for Congregation Beth Israel. It’s a lot to do, but, as far as Katz is concerned, it’s the least she can do.

“It definitely scares me that I could be exposing myself, but people need help,” she said. “I’d rather sacrifice myself than have a senior go into a grocery store and contract the virus instead.”

Many of the volunteers who were delivering food between the two seniors homes when COVID-19 arrived were older folks themselves. It was too risky for them to continue, so the congregation put out a call for new volunteers. Katz was among the first to step up, despite her busy exam schedule.

“Crisis brings out the best and the worst in people, and I think Ava is one of those examples of it bringing out the best,” said Krystine McInnes, volunteer coordinator for the synagogue. “The idea of selfless service and loving our neighbours as ourselves – she really embodies that.”

Helping people is in Katz’s blood. Her grandfather was a doctor for more than 60 years. She came to UBC thinking she would go into medicine eventually, too. Nothing during her first year has changed that. In fact, the COVID-19 outbreak has given her even more respect for the healthcare and support workers who keep our hospitals functioning every day.

“They are real heroes,” said Katz. “I have a huge respect for what it takes to provide care to so many people at a time like this and it reinforces my commitment to be a part of it.”