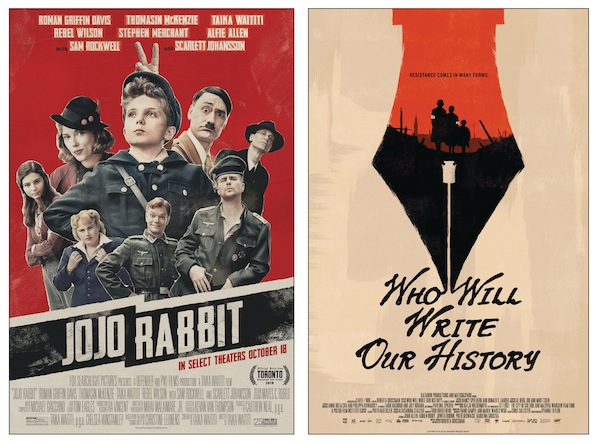 Last year was a busy one, but not a great one, for Jewish-related movies. There was plenty to see, but only a couple films – Jojo Rabbit and Uncut Gems – broke through the clutter to make an impact.

While Jewish characters were front and centre in high-profile TV shows – The Marvelous Mrs. Maisel, The Kominsky Method and Broad City – in movies, they were largely relegated to glorified cameos, such as Al Pacino as old-school agent Marvin Schwars in Once Upon a Time in Hollywood and Alan Alda as menschy divorce attorney Bert Spitz in Marriage Story.

Jojo Rabbit: The most ambitious and audacious film of the year was made by a Maori Jew from New Zealand. Taika Waititi, the director of Marvel’s Thor: Ragnarok, radically adapted Christine Leunens’ novel into a sharp satire of Nazi racism and groupthink that garnered the San Francisco Bay Area Film Critics Circle Award for best screenplay.

Who Will Write Our History: My only criticism of Jojo Rabbit is that it didn’t convey the depth of the Holocaust’s horror. Roberta Grossman’s artful documentary about the men and women in the Warsaw Ghetto who secretly amassed an archive of documents and diaries that would survive (if they didn’t) fills in a missing historical chapter for people of all ages. (See jewishindependent.ca/a-different-kind-of-resistance.)

Prosecuting Evil: The Extraordinary World of Ben Ferencz: The last surviving U.S. attorney from the Nuremberg trials has an impeccable memory, a spotless moral compass and enormous gravitas. This terrific doc serves as an inspiring counterpoint to Matt Tyrnauer’s slick biography of another Jewish lawyer from New York, Where’s My Roy Cohn?, who lacked an iota of integrity.

Mike Wallace is Here: Avi Belkin examines another iconic New York Jewish character, the penetrating TV journalist who made 60 Minutes essential viewing, entirely through archival TV footage. It is one of the smartest and best documentaries of 2019.

Synonyms: Nadav Lapid’s abrasive, semi-autobiographical drama about a self-loathing young Israeli army veteran’s effort to shed his identity in Paris won the Golden Bear for best film at the Berlin International Film Festival. It is painful and revealing, with some flashes of humour.

Tel Aviv on Fire: Sameh Zoabi’s clever comedy about a Palestinian soap opera writer trying to navigate the demands of his bosses and an Israeli checkpoint commander was one of nine (!) films with Jewish themes among the official submissions for the best international film Oscar.

Transit: German director Christian Petzold transposed Jewish novelist Anna Seghers’ 1944 story of refugees trying to flee France to an enigmatic time and place that has echoes of both the past and the present.

To Dust: Shawn Snyder’s debut feature explores the grief process through a Chassidic cantor (Geza Rohrig of Son of Saul) who wrangles a community college science professor (Matthew Broderick) into his obsessive investigation into how his wife’s body will return to dust. Meanwhile, his sons worry that he’s possessed by a dybbuk.

Fiddler: A Miracle of Miracles: A crowd-pleasing, by-the-numbers doc about the historical (shtetl life) and literary (Sholem Aleichem) roots, creative development and enduring cross-cultural popularity of the Broadway musical Fiddler on the Roof. Formulaic, but Jewish through and through.

Some of the best films of the year won’t open in North America until 2020. The Ophir Award-winner Incitement powerfully dramatizes the life of Yitzhak Rabin’s assassin, leading up to his irreparable act. Roman Polanski’s well-reviewed portrayal of the Dreyfus affair, An Officer and a Spy, has opened across Europe but awaits a North American distributor (a long shot given the likelihood of protests and boycotts).

Czech director Vaclav Marhoul’s harrowing adaptation of Jerzy Kosinski’s Second World War-set novel The Painted Bird is also on European screens, with a U.S. release likely now that it was shortlisted for best international film. In that eventuality, look for it during its brief run – and on next year’s Top 10 list.