When Storming the Digital Divide: The PovNet Story was published in August by Lazara Press, the Jewish Independent received a copy. A history told in words and through illustrations about the B.C.-based online anti-poverty community network, the JI waited until school started, as it seemed the perfect topic for King David High School teacher Aron Rosenberg’s social justice class. And it was.

Once students were into the rhythm of classes and the High Holidays had passed, Rosenberg met with Penny Goldsmith – PovNet founder and a longtime community organizer and advocate – to determine how to address the subject. Goldsmith wrote Storming the Digital Divide, while B.C. artist, writer and activist Kara Sievewright – who has been PovNet’s web coordinator and illustrator since 2005 – created the images, and there are additional drawings by artist, researcher and educator Nicole Marie Burton of Ad Astra Comix, which publishes comics with social justice themes.

Before Goldsmith even did her presentation to Rosenberg’s class on the morning of Nov. 24 – appropriately enough, a day that fell during KDHS’s Random Acts of Chesed Week – the students had homework. In pairs, they had to choose a bubble from the 12-page timeline laid out in the book, which, as the book notes, highlights “selected issues that are an important part of the history of work done by the many advocates and marginalized community members who use PovNet in British Columbia. It also scans the history of technology and organizing as it affects the anti-poverty movement in British Columbia.”

The timeline goes from 1971 – “The first email is sent” – to 2015, which contains several key developments, such as the province’s first seniors’ advocate (Isobel Mackenzie) being appointed and the release of a 40-page report in which “nine social services agencies from across B.C. have asked the ombudsperson of B.C. to launch a systematic investigation into service reductions at the Ministry of Social Development and Social Innovation (the welfare ministry) that shut out many eligible people from accessing social assistance.”

For Goldsmith’s presentation, students were asked to consider their chosen bubble with respect to a few questions: “What does the information in the bubble mean for poor people? For anti-poverty advocates who work with them? For you?” Divided into groups, a table spokesperson shared some of the thoughts that arose from the brief group discussion of the questions. Student Leora Schertzer, in her role as master of ceremonies, made sure that every student who wanted to contribute aloud was invited to do so.

Alternating between group discussion and Goldsmith’s talk, which included visuals of some of the book’s illustrated pages, the students considered questions that Goldsmith and Rosenberg had prepared in advance, such as “What do you think the digital divide might mean?” “What do you think the difference is between charity and anti-poverty work?” and “How do you envision a future online world?”

Once the students had a chance to think about the issues, Goldsmith offered her thoughts, using portions of the book, beginning with an explanation of its title.

“From trying to get a job, finding adequate housing and accessing government services … to networking with fellow advocates and fighting for social change, the internet is now at the very least an essential service,” said Goldsmith. Regarding the accessing of government services, she gave the example of qualifying for welfare, which requires the completion of a 90-screen online application.

She offered a few definitions. “Collins English Dictionary defines the digital divide as ‘the gap between those people who have internet access and those who do not.’ Simple,” she said. “Dictionary.com expands the definition to include ‘the gap between those who are computer literate and those who are not.’ An important addition. Other dictionaries expand the definition to include marginalized communities in developing countries.

“According to a report from the Public Interest Advocacy Centre published in July 2016,” she said, “one-half of low-income Canadians are trading off other household goods or services in order to pay their communications bill – almost one in five (17%) indicated they went without other essential goods such as food, medicine or clothing in order to pay a communications bill.”

A lack of money is not the only barrier to internet access.

“An online space can, by its very structure, leave out marginalized communities,” Goldsmith explained. “If English is not your first language, online communication is not always as easy as being in the same room together with your peers. If accessing a computer is an issue, particularly in rural communities, if technology is daunting – people get left out of the conversation.”

It is these barriers that PovNet also works to diminish.

“PovNet is an online community of social justice advocates, activists, community workers and marginalized people who work in the anti-poverty world in British Columbia and across Canada,” said Goldsmith. “It hosts a public website that provides up-to-date information about welfare, housing and homelessness, unemployment, disability and human rights issues.

“PovNet’s community of users is vast,” she continued. “A disability rights organizer in Nelson goes to the PovNet website to get some information for a community workshop she is doing that night about changes to disability bus passes. A tenant in the Lower Mainland of Vancouver goes online to find an advocate to help him deal with a landlord trying to evict him. Several workers at a women’s centre in a small northern British Columbia town sign up for an online course at PovNetU about dealing with debt because they have so many clients coming into the women’s centre who are being harassed by a local collection agency.

“But what’s important,” she said, “is that everyone who wants to, has to have access to PovNet. That means money for computers, and government commitment to universal bandwidth and internet access. It also means that all of PovNet’s diverse communities have to feel that the network belongs to them.” 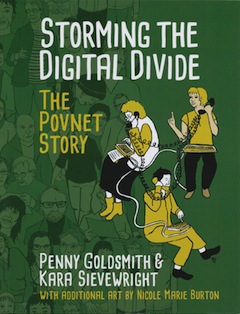 Storming the Digital Divide contains many illustrated stories from the online anti-poverty community, which bring the facts and figures closer to home, as well as the impact of PovNet over the 20 years since it began in 1997. While Goldsmith is no longer the organization’s executive coordinator – a post she filled for 18 years, until 2015 – she remains passionate about its work. And some of it rubbed off. Here are some of the comments students wrote after her talk.

• “Penny’s presentation exposed me to how reliant our society and greater world is on the internet…. Those who are unable to access the internet or technology are at an automatic disadvantage for workplace opportunities and almost all information.” (Justine Balin)

• “Listening to Penny’s presentation last week gave me an insight into the challenges that people without access to the internet face. Hearing about how some people have to choose between paying for internet access or having dinner made me realize how much I take having internet for granted. I also realized how big of a luxury it is to have my own computer and the privacy that comes with owning my own device. Before hearing Penny speak, I never realized how large of an issue internet access was…. Hearing about PovNet and how they advocate for internet access for those who need it really opened my eyes to a social justice issue that I would have otherwise been oblivious to.” (Talia Buchman)

• “In ‘A PovNet Timeline,’ I chose to focus on the [2008] bubble that states that over 40% of people who died in B.C. of HIV-AIDS died because they never received the necessary treatment because they were poor. Reading this bubble disturbed me quite a bit. I was mostly disturbed because we, as a country, try so hard to be the best society we can possibly be (i.e. equal rights), however still tend to fail at the situation with people living in poverty. We advertise that Canada has free health care, but do we really?” (Michelle Nifco)

• “The cost to live in British Columbia has been rising steadily and the welfare rate has also been rising but not as fast as the cost of living. I am fortunate enough to not be relying on welfare and hope that I will never need to rely on it, but many Canadians rely on welfare cheques every month to keep a roof over their head and food in their stomachs.” (Elle Poirier)

• “What I found immensely important about my experience with Povnet’s work was what they called ‘A PovNet Timeline: A Selective History of Poverty, Anti-Poverty Organizing & Technology in B.C.’ The timeline was extremely motivational and taught me that if citizens have enough passion and drive, they can influence the powers that be, even when it may seem that said powers are completely inflexible or severely rigid. This premise was explored throughout a variety of different events within the timeline.” (Anthony Schokalsky)

Storming the Digital Divide ($12.95) is available from lazarapress.ca.