Selina Robinson, minister of municipal affairs and housing, speaks at the local memorial for the victims of the shooting at Tree of Life synagogue in Pittsburgh. (photo by Alan Katowitz)

On Sunday afternoon, Oct. 28, the day after a gunman opened fire on Shabbat worshippers in Pittsburgh in the Tree of Life synagogue, hundreds gathered at the Jewish Community Centre of Greater Vancouver for a vigil for the victims.

Eleven congregants were murdered and four police officers wounded before the shooting suspect, Robert Bowers, was apprehended, in what the Anti-Defamation League is calling the greatest antisemitic massacre in American history. Above the crowd in the Wosk Auditorium at the JCCGV, a projector showed a version of the logo of the Pittsburgh Steelers that had been created in the wake of the shooting – it had one of the iconic stars replaced by a Star of David.

The local response was so large that a separate service had to be held in the community centre’s atrium. The Jewish Independent attended the vigil in the auditorium, which was opened by Rabbi Hannah Dresner, spiritual leader of Or Shalom Synagogue and head of the Rabbinical Association of Vancouver.

“We must stand with other minorities to combat hatred with nobility, goodness, and with radical love,” said Dresner. “We must strengthen our empathy with marginalized peoples and do the job, each of us, that is uniquely ours, to create a heaven right here on earth. But first, we must grieve a Jewish loss.”

The rabbi closed with reading a poetic translation of Psalm 23, which is traditionally read at funerals.

Rabbi Jonathan Infeld of Congregation Beth Israel said, “I’ve lived for the last 13 years in Vancouver but was born in and grew up in Pittsburgh. I went to Tree of Life many times as a teenager. HIAS [Hebrew Immigrant Aid Society], the organization the deranged individual was most upset about, was the organization that brought my parents to the sanctuary of Pittsburgh.”

The shooter, who had yelled, “All Jews must die!” before opening fire, had written on Facebook before the attack that he was incensed by Jewish support for immigrants and refugees, who he believed were entering the United States to slaughter white people.

“The massacre took place in Squirrel Hill, in Mr. Rogers’ neighbourhood, where Fred Rogers taught us the Torah verse, ‘you shall love your neighbour as yourself,’ so well,” Infeld noted. “The response to something like this is repairing the world.”

He appealed to everyone present, and all Jews, to fill every synagogue to capacity in the coming weekend. “I ask that all synagogues in Vancouver be filled, with not one seat empty,” he said.

Karen James, chair of the board of the Jewish Federation of Greater Vancouver, then spoke, followed by Selina Robinson, minister of municipal affairs and housing, who read a statement from B.C. Premier John Horgan.

“British Columbians’ hearts are broken, hearing the devastating news of the shooting at the Tree of Life synagogue in Pittsburgh. Everyone should feel safe in a place of worship,” said Horgan in his statement. “My caucus and I and everyone in the House reject antisemitism, racism, discrimination, intolerance and bigotry. When these rise up, we must stand up united and denounce them together in the strongest of terms. An attack like this is a deep violation of safety and security. Our thoughts are with the families of those targeted and Jewish people around the world.”

Robinson was among many officials present, including Bruce Ralston, minister of jobs, trade and technology; Ravi Kahlon, parliamentary secretary for sport and multiculturalism; Howard Chow, Vancouver Police Department deputy chief constable; Irene Lanzinger, president of the B.C. Federation of Labour; and several members of the Legislative Assembly. Richmond North Centre MLA Teresa Wat changed a flight to be there.

“I am quite connected to the Jewish community,” Wat told the Jewish Independent, “especially the Bayit congregation in Richmond. When I saw what’s happening, I felt really sad. We need to combat this kind of attack on humankind as a global village. Everyone is related and, if it happens to one ethnic group, it can happen to any other. I am happy to see this vigil and hope that all ethnic groups will gather in solidarity to condemn this kind of atrocity.” 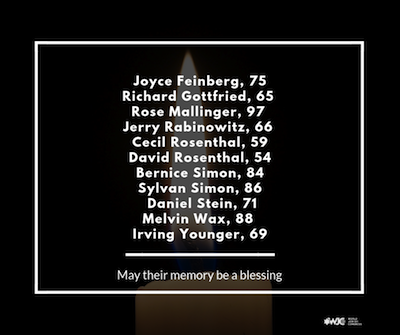 Rabbi Dan Moskovitz of Temple Sholom led a candlelighting in remembrance of the victims, with help from Rabbi Adam Rubin of Beth Tikvah. Moskovitz read the names of each victim and shared something from their biography. “In the Jewish tradition,” said Moskovitz, “we need the names. To say Kaddish, to pray, to remember.”

Rabbi Aaron Bisno of Congregation Rodef Shalom in Pittsburgh then joined the service in the auditorium on video, thanking the Vancouver Jewish community for their solidarity. He told the story of being at his synagogue on the day of the shooting – where he was doing a baby naming for two Jewish fathers who had adopted a child – and hearing the news and having to tell the congregation that they were on lockdown until the shooter was apprehended. Bisno urged the crowd to “repair the world when we find it fractured instead of blaming each other for that which we find uncomfortable. I give you my most sincere blessing of gratitude.”

Many non-Jewish community clergy were present at the vigil, including Dr. Kala Singh and Pritam Singh of the Sikh community, Prof. Harry O. Maier of the Vancouver School of Theology and Haroon Khan of the Al Jamia Masjid mosque.