With the themes of Passover still reverberating, I read Aliza Ziv’s book New Home, New Hope (Contento de Semrik, 2014). About a single mother making aliya from the Soviet Union with her two young children, the book is about freedom, being strangers in a new land, becoming part of a community, respecting the past while trying to create a more promising future. 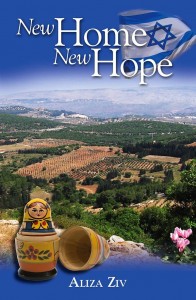 The story centres on Marina, Boris, 9, and Tanya, 4, and their experiences integrating into Israel from 1985 through 1995. It is both a specific and universal tale about immigration, and the challenges and opportunities new immigrants face anywhere in the world. However, the specificity is what most intrigued me. Ziv writes with authority and in detail about both the absorption process in Israel at the time and the political situation there and in Russia during that decade.

“This book was written on the basis of my vast experience teaching new immigrants who came to Israel (olim hadashim),” wrote Ziv in an email to the Independent. “These immigrants had to face a new culture, language, values, and had to adapt themselves to their new homeland.”

Ziv explained that she first published the novel in Hebrew in 2002 with the title Difficulty Beyond Words. “Later on, my husband Joe and I decided to translate it into English. It was published in October 2014, with a new name, New Home, New Hope.”

“The book is also based on what we had to face when we and our three children made our aliya in 1967,” added her husband in a separate email. “Aliza was a shlicha, sent to teach modern Hebrew using the ulpan method. She taught in Halifax, Toronto and, finally, in Vancouver at the Talmud Torah.”

While Aliza was born in Jerusalem, Joe grew up in Vancouver, went to VTT and King Edward High School, and graduated from the University of Alberta. “I was active in Young Judaea, one of the first organizers of Habonim, and one of the founders of Camp Miriam,” he said of his local connections.

The Zivs’ personal experience with immigration comes through in Aliza’s writing. She doesn’t sugarcoat the difficulties of leaving an established life, family and longtime friends and integrating into a new country, having to learn another language, find a home, (re)start a career, build relationships, etc., etc., all the while worrying about those you’ve left behind. And your new fellow citizens must also get used to your presence in their country – immigrants seem threatening to some people, to their job security, their traditional way of life, and Ziv also tackles these issues in her novel.

One particularly interesting scene is a party on a moshav at which the more established Israelis are playing old Russian songs, wondering why the new immigrants aren’t joining in. One of the Israelis explains how the chalutzim (pioneers) “came to build the Jewish homeland, and within them was an integration of socialist and even communist values and concepts. And so they established cooperatives, kibbutzim and moshavim…. We grew up with lots of love of the Russian culture, its music and especially its songs. It is really in our blood.” The new immigrants are not convinced, and one points out that many of these songs “not only have a romantic base but also have an antisemitic and militaristic, murderous one. About Bogdan Khmelnsiky, Simon Petliura, have you heard of them?” The debate continues, and it is these parts of New Home, New Hope that I found the most compelling. (I have since looked up both of these men online.)

From a literary perspective, New Home, New Hope is not one of the best books I’ve ever read, and the formatting and editing is not as clean as it would be if it had been put out by a conventional publishing house, but it is one of the more interesting books I have ever read. Ziv is a good writer and she is a fount of knowledge on topics that many readers would profit from – and enjoy – learning about.

New Home, New Hope is available in both digital (Kindle) and printed formats through Amazon.