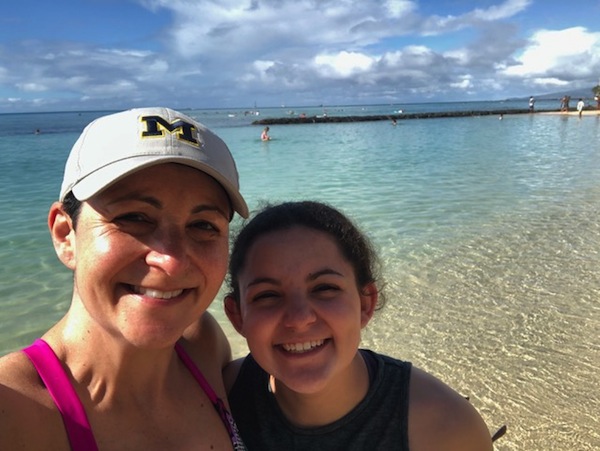 Many people experience one or more kinds of anxiety disorder, yet fewer than half seek professional help, often because of the perceived stigma of having such a condition, according to Deborah Grayson Riegel and Sophie Riegel.

Both Deborah and her daughter Sophie, 19, have more than one diagnosed anxiety disorder – Deborah has three and Sophie, four. Initially, as Deborah and husband Michael were helping Sophie with her anxiety, they didn’t tell her about Deborah’s. But that silence has ended.

Today, Deborah is a speaker, executive coach, instructor and writer who works part-time in the Jewish community in Manhattan. The bulk of her work is within the corporate community, helping people navigate difficult conversations.

“As Sophie and I were putting our book together, I realized how much of my work is about helping people manage the anxiety associated with getting up and speaking in front of other people, or giving feedback or having hard conversations,” Deborah told the Independent.

Most recently, Deborah was invited to work with Duke Corporate Education, which she was excited about, with Sophie having just started as a freshman at Duke.

“I think Sophie feels really strongly about letting parents know that, if you’re withholding or not exploring medication because of a stigma, because of a fear of dependency, because of anything, you may be costing your kid time,” said Deborah. “Sophie had said in a different interview, where questions came up about what we as parents wish we’d done differently … Sophie’s answer was that she wished we’d explored medication sooner.”

According to Sophie, seeking professional help is important, as the combination of both counseling and medication worked best for both her and her mother, as it does for many others.

Shortly after a traumatic experience at the age of 13, Sophie began working on her first book, Don’t Tell Me to Relax!: One Teen’s Journey to Survive Anxiety and How You Can Too, which she completed in five years. “I started writing it because I was being severely bullied due to some of my obsessive compulsive tendencies,” said Sophie. “I talked to my therapist and we realized the only way to have people stop bullying me was to educate them. So, I ended up giving a 20-minute presentation in seventh grade about my experience living with OCD [obsessive compulsive disorder] and anxiety, and the girls who had bullied me ended up coming up and apologizing to me. I realized that, if I could have that kind of impact in 20 minutes, imagine what kind of impact I could have if I wrote an entire book that I could share with everyone.”

Once Sophie’s book came out, she and her mom decided to co-author one together. Called Overcoming Overthinking: 36 Ways to Tame Anxiety for Work, School and Life, it came out last year.

“Secondly, I had gotten a call from an organization that had thought that Sophie’s book was something we wrote together. They said, ‘Oh, you wrote this book together … we’d love for you to come and speak.’ And I said, ‘Well, we haven’t written a book together, but we will by October!’ So, we just said, ‘All right, now we’ve told somebody we’re going to write a book … now we have to go write it.’ So, we had a little bit of artificial, external pressure, but it worked well for us.”

In her first book, Sophie shares her journey with anxiety disorder and offers advice to parents, teens and educators; she also debunks anxiety myths and provides a list of resources.

In Overcoming Overthinking the mother-daughter duo offers self-help tips and tools, and focuses on strategies and advice, with about a quarter of the book being from a personal perspective.

One of the stories Sophie shares in the second book is about bribing her therapist to convince her parents that getting a dog would be worthwhile and helpful for her. “We ended up getting a dog, but the interesting part of the story is that my mom is absolutely terrified of dogs … or was … we went from having no dog to having this 80-pound pitbull,” said Sophie.

“And it’s a sign of how much a parent will do to make sure their child is OK … that they will go above and beyond and do anything they need to do. Because, at that point, right before getting a dog and before things started getting a little better for me, my parents thought I’d never be able to graduate high school … that I’d have to be institutionalized, those kinds of things. With this dog, Nash, who’s my best friend, I was able to learn new strategies to handle the anxiety … and learned how much my parents really loved me, and what they were willing to do so I was able to live a healthier lifestyle.”

Both books have been well-received, with parent readers sharing messages such as, “My teen is going through this exact same thing and, because they read your book, they’re starting to know how to talk about it … and I know how to talk to them about it, so you’ve really opened up the lines of communication between us.”

Deborah said, “I got one message from a parent who originally thought their kid was having a heart attack, but then realized from what they had read in Sophie’s book that it was actually a panic attack. It kept them from having to bring him to the ER, because they realized it wasn’t a heart attack. So, they were able to help at home thanks to Sophie’s book.”

Both Deborah and Sophie strongly encourage people to seek professional help when in need. Their book is not a substitute for psychological intervention, they stressed. Deborah added, “We strongly recommend getting that kind of support, whether it’s cognitive behavioural therapy, which has worked for both of us, [or other approaches.]” 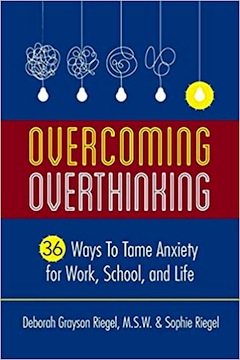 Overcoming Overthinking has 36 chapters, which is intentionally double chai (18), symbolizing the saving of the two authors’ lives. The book is divided into three sections.

“The first one is about strategies to change your thinking, to help you change your perspective and mindset, and as a tool for coping with anxiety,” said Deborah. “The second one is about creating new strategies, some concrete things you can do to help you work with anxiety that we think are a little bit out of the box … not what one might call a typical strategy. And the third part is to connect with others about the idea of not isolating yourself and the importance of reaching out, even if that means outing yourself that you’re struggling with something. Most people are uncomfortable being vulnerable. So, we give 12 strategies in that section about how to not do this alone.”

“I have catastrophic thinking,” said Deborah. “That’s one of the ways my OCD and anxiety show up. Catastrophic thinking has two key elements…. It’s overestimating unlikely probabilities and overestimating devastating consequences. And so, in the morning, we’d put our kids on the school bus and I’d articulate that this is probably the last time we’d ever see them again. Or somebody would get sick and I’d say they’re probably going to die. Or Michael would not answer his phone when I called, and I’d assume he’s dead on the highway. At a certain point, I came to realize that not everybody thinks like this … and that it’s not healthy to think like this … or healthy in a relationship to articulate things that the person cannot help in any way.”

Deborah said she ended up going to speak with a psychologist and getting medication. “That medication has taken my catastrophic thinking from 98% down to two percent,” she said. “Sophie was valedictorian of her class and she got into Duke … her first choice. Sophie is an all-American athlete and has won anti-bullying awards. She has written two books and struggles with four significant anxiety disorders.

“I’m somebody who has a successful career, a healthy marriage and two great children. I travel all over the world for my work. And I struggle with three diagnosed anxiety disorders.

“So, one of the important points is that you can have AD, you can have mental illness, while you can also be happy, healthy and successful. And that feels like a very important message to share,” said Deborah.