It’s been eight years or so since I reviewed Mark Binder’s The Brothers Schlemiel, which recently has been reissued by Light Publications with the title The Village Twins, and written under Binder’s pen name, Izzy Abrahmson. I knew this story of Chelm would withstand the test of time for two reasons. First, we regularly publish a Binder/Abrahmson story in our holiday papers. Second, the stories are written in the style of Yiddish folk tales, which have proven staying power. 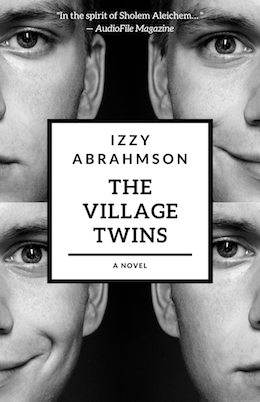 As Abrahmson explains in The Village Twins, Chelm is “a tiny settlement of Jews known far and wide as the most concentrated collection of fools in the world.” According to The YIVO Encyclopedia of Jews in Eastern Europe, the “first publication of Chelm-like stories appeared in Yiddish in 1597, and were tales of the town of Schildburg, translated from a German edition. Hence, these stories first entered Jewish culture as Schildburger stories, and it is unclear when they became connected to the town of Chelm. During the 19th century, a number of other Jewish towns figured as fools’ towns, including Poyzn. Over time, however, Chelm became the central hub of such stories, the first specific publication of which occurred in an 1867 book of humorous anecdotes, allegedly written by Ayzik Meyer Dik. Later, particularly in the early 20th century, dozens of collections of Khelemer mayses (Chelm stories) were published in Yiddish, as well as in English and Hebrew translations.”

The Village Twins is one of the latest such collections, and it does honour to its literary ancestors, providing wisdom in the guise of absurdity. The novel can be read on many levels, including as pure entertainment, as the story of a particular family living in a particular era and as a series of parables (it’s 414 pages long, which, I admit, was a bit lengthy for me). It is part of Abrahmson’s Village Life series, which includes several publications and a podcast, but can be read as a standalone novel. I am proof that a person might enjoy, but does not have to, read or listen to the other stories to follow this tale of the Schlemiel family that is centred around twins Abraham and Adam, who cause trouble from the day they are born.

The brothers make full use of their physical similarity throughout their life, from incidences as harmless as pranks around town to more serious situations, such as avoiding being drafted into the Russian army. What I wrote in my 2014 review still stands: Abrahmson “has created characters with whom we empathize…. He ably manages some fine balances: writing about silliness without the story becoming stupid, and evoking sentimentality while not becoming saccharine….. As well, through the vehicles of comedy and fantasy, [it] touches on many serious topics, from poverty to racism, to ethics in business, to whom people choose to be, and more.”

According to the press release, The Village Twins has been updated and revised, though I can’t speak to how, as my copy of The Brothers Schlemiel has long since been passed on. Along with this reissue came Binder’s pen name “to distinguish the series from his other work. By combining his Hebrew name, Isaac, with his father’s Hebrew name, Abraham … Izzy Abrahmson was born.”

As an editor, dealing with a writer with two names is a little unwieldy and I sometimes feel like the villagers of Chelm, who, for “many, many years” couldn’t tell Abraham from Adam. But that doesn’t diminish my enjoyment of Abrahmson’s – or is it Binder’s? – storytelling. He has won multiple awards for a reason. Anyone who likes a good folk tale will delight in The Village Twins.