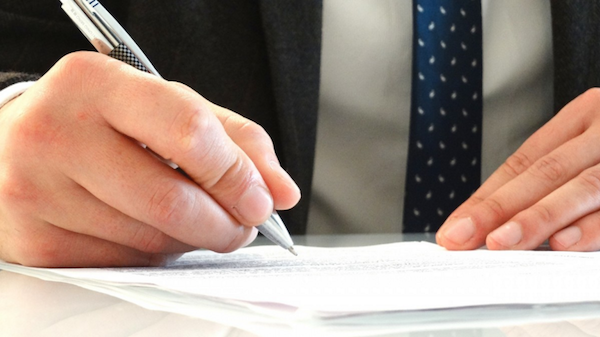 Typically, an insurer will bring a “standard” form of release to a mediation to be signed. (photo from pxhere.com)

Most of my cases against insurance companies settle, often at mediation. Typically, the insurer will bring a “standard” form of release to the mediation for my client to sign. If not, when the insurance company’s lawyer sends me the cheque, it will be accompanied by a form of release that my client must sign in order to receive the settlement funds. In either case, the release will always contain something not usually discussed – a confidentiality clause.

It is routine for the confidentiality clause to permit the settlement amount to be disclosed to tax preparers, accountants and legal or financial advisors. Not so routine, although perhaps it should be, is a carve-out that allows a client to reveal facts from the underlying claim to industry regulators.

Clients often object to confidentiality because they are frustrated and angry about what has happened to them and, specifically, what the insurance company did. Insurance companies always want confidentiality, often because of the feared perception of guilt that accompanies a settlement. That secrecy itself may be adverse to public policy and protection of the public, as it can allow wrongful conduct to continue.

As lawyer Ronald L. Burge wrote in a 2012 paper for the American Bar Association: confidentiality clauses are “bad for clients, bad for lawyers and bad for justice.”

Confidentiality prevents the public from knowing about wrongful conduct. It can also prevent regulators and government agencies from performing their duty to enforce the law and protect the public. The role of the court is to evenly administer justice to all, so that all are protected by the law. When violations are hidden by confidentiality, the legal system itself is thwarted from fulfilling one of its fundamental purposes – to protect the public from wrongful conduct.

Society would be better off if all settlements were public knowledge. Wrongful conduct would be exposed not just for the economic justice of the client, but for the broader societal purpose of curbing such wrongful conduct. Lawmakers and the public could see where problems exist, both in products and service suppliers, and act appropriately. Fundamentally, the settlement of a lawsuit should be a public proceeding, just as a trial is a public proceeding.

Moreover, the legal system does not belong to any industry, certainly not the insurance industry. It belongs to the Canadian public. Courts function best in the daylight of an open, transparent administration of justice. Otherwise, people cannot observe and understand what is going on and how the courts protect everyone by their fair administration of justice. Secrecy protects repeat offenders and harms everyone else. Openness is consistent with basic principles of the rule of law.

Secrecy in settlements also prevents lawyers from properly serving their clients. A lawyer cannot place a fair and reasonable value on a case when the lawyer cannot compare it to other known cases. It is particularly harmful to inexperienced lawyers who may be most prone to undervaluing a case. The secrecy allows insurance companies, with their vast resources, to assess a claim’s fair value, while preventing many clients from doing the same.

Finally, confidentiality does not actually promote settlement. The vast majority of cases already are settled without trial.

Governments should specifically limit the use of confidentiality clauses in the settlement of lawsuits involving wrongful conduct by insurance companies. This should be done for the protection of the public, to improve the industry and to preserve the effectiveness and integrity of our legal system.

Jan A. Fishman is a lawyer practising in Vancouver. He mainly acts for individuals who have been wrongly denied insurance benefits. He has held numerous elected and appointed positions in the legal profession and currently sits on the editorial board of Civil Jury Instructions. He also volunteers in the Jewish community and is active in his synagogue.