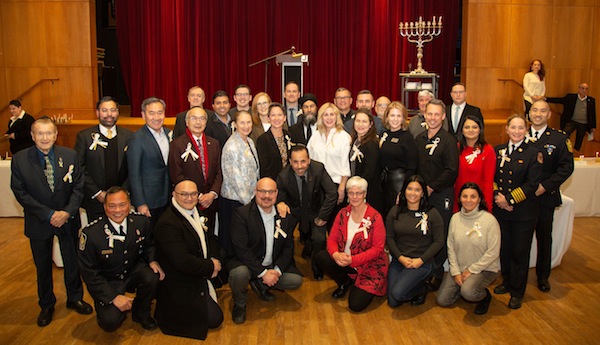 British Columbia’s Jewish community welcomed elected officials, community partners and volunteer leaders to celebrate the second night of Hanukkah at the Jewish Community Centre of Greater Vancouver for the CJPAC and CIJA Dreidels and Drinks reception.

The Canadian Jewish Political Affairs Committee is a national, independent, multi-partisan nonprofit. Its mandate is to engage Jewish and pro-Israel Canadians in the democratic process and to foster active political participation. It is dedicated to helping community members build relationships within the Canadian political arena.

The Centre for Israel and Jewish Affairs is the advocacy agent of Jewish federations across Canada. CIJA represents the diverse perspectives and concerns of more than 150,000 Jewish Canadians affiliated with their local Jewish federation. As the Canadian affiliate of the World Jewish Congress, representative to the Claims Conference and to the World Jewish Restitution Organization, CIJA is also connected to the larger organized Jewish community.

The annual CJPAC-CIJA Hanukkah soiree drew a diverse crowd of attendees, including multi-partisan representation across federal, provincial and municipal governments, members of the diplomatic corps, Vancouver Police Department, Vancouver Fire Rescue Services, and guests from civil society, who lit their own menorah at the front of the room while Rabbi Philip Bregman, interfaith liaison for the Jewish Federation of Greater Vancouver and the Rabbinical Association of Vancouver, officiated the candlelighting ceremony.

PJ Library books were sent home with elected officials, along with a menorah, candles and chocolate gelt for their home/office.