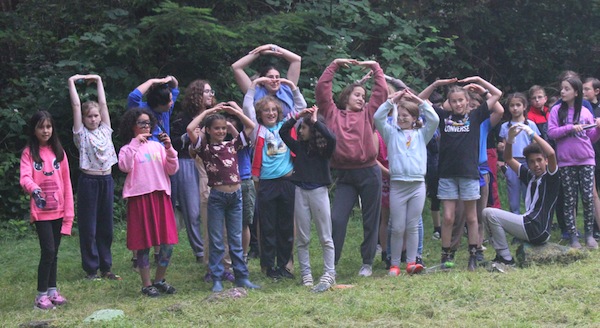 Camp Miriam adapted during the pandemic, but nothing quite compares to being back in the old stomping grounds of Gabriola Island. (photo from Camp Miriam)

Camp Miriam is a place that holds fast to tradition. This tendency is obvious if you just look around: tables in the chadar (dining hall) are signed and dated by the former chanichimot (campers) who painted them, with the oldest table proudly displaying an impressive “1997.” Besides the tables, Camp Miriam has been running educational and Labour Zionist-oriented programming since it opened in 1948. Camp Miriam has a solid foundation of tradition and is not a place accustomed to rapid or unexpected change.

If Camp Miriam is so deeply rooted in tradition, how, then, to return to its customs after they were so rapidly and unexpectedly interrupted during the past couple of years? With 2022 constituting the first year that Camp Miriam could offer campers a full-capacity summer on Gabriola Island since 2019, there were many traditions to get back to. I, for one, had started to forget what it feels like when all of camp holds hands on Saturday nights during Havdalah. I was also having a hard time recalling the early morning energy that fills machaneh (camp) at 8 a.m., when around 200 chanichimot and tzevet (staff) are just waking up, eager to meet the day.

Of course, I did get around to remembering both the longstanding customs and everyday activities that take place at camp. But I didn’t do it alone. This summer, I worked as a madatz madrichol (counselor-in-training counselor), one of four madatz madrichimot, meaning I spent a lot of time with youth aged 16 to 17. As future leaders of Camp Miriam, the madatz were grateful to have the chance to take part in the leadership development program, especially after having lost valuable experiences to the pandemic. Throughout the summer, I watched them grow, face challenges and become people who will be important guides in the lives of Camp Miriam campers for years to come. I was impressed and humbled by all they accomplished, and it is largely through them that I was able to remember what it means to be at Camp Miriam.

So what does it mean? Camp offers lots of opportunity for personal development and growth and, at the same time, it provides a nearly criminal amount of fun, both for chanichimot and tzevet. There is avodah (labour) and a chance to take care of their summer “home,” and there are chuggim (interest groups), where kids chose an activity that interests them, like pretending to be Vikings, or swimming or making friendship bracelets. We all explored Gabriola and Vancouver Islands on tiyul (out trips), shared Shabbatot together, and contributed to meaningful conversations in daily educational programming blocks, during which we covered topics from consumerist culture to antisemitism.

While Camp Miriam adapted during the pandemic, nothing quite compares to being back in the old stomping grounds of Gabriola Island. Sure, maybe madrichimot had to explain basic elements of camp to kids more times than usual, but the synapses of the Camp Miriam community were firing and, together, we remembered. It is not a far cry to consider the summer of 2022 as a triumph – both in recovering the institutional memory of Camp Miriam, and in providing campers with meaningful summers. I, for one, know that more than one madatz went home with stories they’ll be telling to their own children.

Reflecting back on the summer, I can’t help but feel a certain amount of pride. There is pride in remembering, and it is thanks to this recovered memory that Camp Miriam will continue to grow.

Emma Paidra has been a chanichol (camper) at Camp Miriam since 2009 and she is a fifth-year madrichol (counselor).