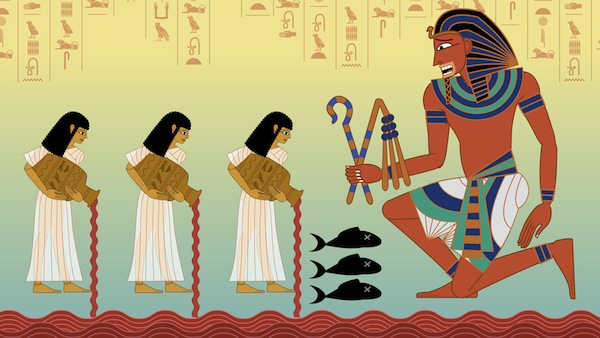 God Almighty Herself induces Egypt to give birth. We simply need to listen for the birth mother’s screams in the delivery room. We hear the screams throughout the plagues, as they become increasingly intensive, starting with the first plague, blood. (illustration by Nina Paley)

The idea of the Exodus as a birth story begins as Shemot (Exodus) begins. The first chapter brings us into the atmosphere of a giant delivery room. Things have gotten out of control: “And the Israelites were fruitful and increased abundantly and multiplied and grew exceedingly strong and the land was filled with them.” (Shemot 1:7)

The Israelites are having children all the time. There’s this anonymous, collective mass of people that are steadily spreading out. The only two figures mentioned by name are the midwives, Shifra and Pua, and there’s a reason for that. The book is telling us: “Pay attention, readers. We are entering a delivery room, and so the most important figures are the midwives. You will feel this sense of birth.”

If one didn’t get this sense from Chapter 1, take a look at Chapter 2. It begins with the personal birth story of Moses, the story of a natural, biological birth, in which a woman becomes pregnant and has a son. A few verses later, the mother places the baby in an ark, or basket, and, when Pharaoh’s daughter comes by, she takes him in and becomes his adoptive mother. She, too, has a birth story. There’s a womb – the ark. There’s water – the Nile. She sees the womb, the ark. She opens it and she sees the baby. She, too, is portrayed as having given birth. If we saw a portrait of the natural, biological birth by the Hebrew mother, we also have a portrait of the Egyptian adoptive mother who takes the child.

This “birth” mindset will intensify and be actualized through this grand metaphoric story we call the story of the Exodus from Egypt. There was a famine in Canaan, so the Israelites went to Egypt to buy grain and find seed. They stayed. Scripture tells us how they “were fruitful and increased abundantly and multiplied and grew exceedingly strong, and the land was filled with them.”

This little nucleus, the embryo that first descended, is developing within this large Egyptian womb, Israel’s “surrogate mother,” which nourishes this fetus. The time comes for the birth. As in any case of surrogate motherhood, there is difficulty. On one hand, it’s not my baby. I want it out. On the other hand, there’s emotional difficulty. I nourished that child. He’s part of my body.

From the perspective of the child, there will be problems, or challenges, of attraction and repulsion toward the surrogate mother in whom he developed. The Children of Israel grew and developed in that womb, and it must be taken out. But the Egyptian mother refuses to begin the birthing process.

Enter the most powerful midwife imaginable – God Almighty Herself. She induces Egypt to give birth. The entire story is described in this manner. We simply need to listen for the birth mother’s screams in the delivery room. We hear the screams throughout the plagues, as they become increasingly intensive. Blood. Frogs. Lice. Beasts. Pestilence. Boils.

We’re standing next to the birth mother, saying, “Push! Push! Scream! Scream! Let this baby out!” Just before the birth, a moment before the Children of Israel emerge, they are commanded to paint the doorposts with blood. Soon after, this people will pass through this doorway.

They will reach the waters. And the waters will descend, as well. Then the sea will split in two, and the Children of Israel will pass through the waters on dry land, through the birth canal that has opened for them. At the end of the birth canal, who will be waiting for them? The midwife, ready to grasp them and teach them to walk.

This story, this birth story, is the powerful story of the birth of a people. But, beyond the importance of hearing this story, it can also explain what happens later, during their travels in the desert.

Like any newborn baby, the people will cry and scream for their most immediate needs – water, food. Moses and God will provide for them because that’s how you take care of an infant. You give water and food. You can’t expect anything else. Slowly but surely, he will be taught to walk. Slowly, he will learn rules. He will be given laws to follow.

When we meet this child in Bamidbar (Numbers), once he has grown, he will make the same requests that he made in Shemot as an infant: water and food. But God’s response will be different, because we don’t have the same expectations of a little baby that we have from a growing child. We expect something different.

How do we connect this to the seder night? The Exodus, first, is a story. There is a strong emphasis on telling the story. It has all the detail it needs, and all the drama we want. These are what make this story a foundational story, one that can be transmitted generation after generation.

We sit around and tell our birth as a people. We try to impart it to the next generation. When we tell the story with all its detail, it excites us once more. But why is this done over matzah?

God planned the Exodus from the time of Abraham: “Know that your seed will be a sojourned in a land not theirs; they will serve them and be tormented by them for 400 years. But then they will go out with great wealth.”

It’s all planned, down to the moment. God tells them to have their loins girded, their bags packed and their food prepared and, when I say so, leave. Everything had been planned. So what happened? Why couldn’t the dough rise? Why couldn’t they have fresh rolls?

This is a precise dramatization of a birth story. If you want it to be credible, it has to be exact. As in the story of any birth, everything is planned. There’s a due date. There’s a packed suitcase, a list of phone numbers to call. If it’s not the first birth, there are arrangements for the older kids.

Yet labour will always be unexpected. It’s always sudden. The water breaks suddenly. Contractions come suddenly. Suddenly, it’s time to go. That’s birth. Everything is planned, but the moment arrives suddenly. This is the meaning of eating matzah. It’s as if we are saying, everything was there, everything was planned. This birth was a major event and, like every other birth, it was unexpected. Despite all the preparations, we had to run, we had to leave. The dough did not have a chance to rise. All that could be made from it was matzah.

Ilana Pardes’s book The Biography of Ancient Israel describes this as the story of a collective persona, the people of Israel: “The Israelites are delivered collectively out of the womb of Egypt. National birth, much like individual births (and all the more so in ancient times), takes place on a delicate border between life and death. It involves the transformation of blood from a signifier of death to a signifier of life. It also involves the successful opening of the womb, the prevention of the womb’s turning into a tomb…. God performs a variety of wonders in Egypt (the 10 plagues in fact are perceived as such), but the parting of the Red Sea seems to surpass them all. It marks the nation’s first breath – out in the open air – and serves as a distinct reminder of the miraculous character of the birth. Where there was nothing, a living creature emerges all of a sudden….”

As we sit around the seder table, around the matzah, telling the story of our birth each year, you may want to read from the poem, “Miracles,” by Yehuda Amichai: “From a distance everything looks like a miracle / But up close even a miracle doesn’t appear so. / Even someone who crossed the Red Sea when it split only saw the sweaty back of the one in front of him.”

Ask every participant at the seder to think of something that happened to them during the year, something that, because the individual was part of it, they “only saw the sweaty back of the one in front of him.” If we were to take a step back and look at things from a distance, we could have said to ourselves: “I’m living through a miracle. I’m passing through the sea, on dry land. I’m undergoing the process of birth, right now.”

It is worthwhile, and it even brings joy, to mention this miracle and think about it at this event celebrating the great miracle of the nation’s birth.

Dr. Orit Avnery is a research fellow at the Shalom Hartman Institute. She received her PhD in Bible studies at Bar-Ilan University. Her dissertation is entitled The Threefold Cord: Interrelations between the Books of Samuel, Ruth and Esther. This article is based on a talk she gave in Hebrew. Articles by Avnery and other institute scholars can be found at shalomhartman.org.