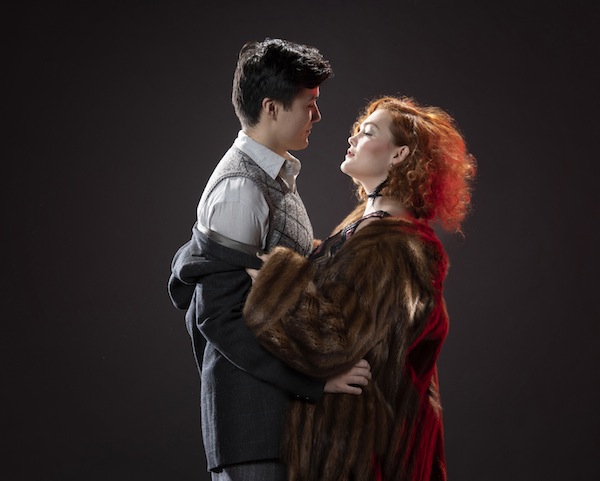 Dylan Floyde as Cliff Bradshaw and Erin Palm as Sally Bowles in Cabaret, presented by Studio 58. (photo by David Cooper)

“I honestly couldn’t think of a more important show to do right now, with such a divided political climate. The past is as important as ever, we must not let it fade. We need stories like these,” Erin Palm told the Jewish Independent about Cabaret, which opened at Studio 58 (Langara College) last week and runs until Feb. 24.

The musical is set in Berlin in 1929, as the Nazis begin their ascent to power in Germany. Palm plays the role of Kit Kat Klub headliner Sally Bowles, the British singer with whom American writer Cliff Bradshaw falls in love.

“Sally is such a complex character. I’d say the most important thing as an actor is honouring her, and acknowledging that she and the other characters in Cabaret are based on the real experiences of Christopher Isherwood, back in Weimar Berlin,” said Palm. “The biggest challenge for me is to know her apathy. It’s painful and tragic.

“I have, hopefully, given her autonomy throughout her journey. I am not a fan of judging the characters I play so, to combat that, I focus on how she is brave, independent and whimsical. She uses humour and imagination as a tool to get through her own challenges and I think that’s where the fun comes in. Really, she’s searching for freedom, and I love playing with that as an actor.”

Palm is in her third and final year at Studio 58. “I became a student the summer after I finished playing Fruma Sarah in Fiddler on the Roof with RCMT [Royal City Musical Theatre] and traveling to Toronto to do the National Voice Intensive. It was a big decision to go back to school, but I know the legacy of Studio 58 is that it turns out fine actors. I wanted to give myself the best opportunity to grow and gain new tools.”

Fellow Jewish community member Josh Epstein makes his directing debut with this production. A multiple-award-winning actor and filmmaker, he was a student at Studio 58, where he played the role of Joey in Pal Joey. “I also met my creative partner, Kyle Rideout, while there and we named our company Motion 58 in honour of Studio 58,” said Epstein. (He and Rideout recently sold a feature film pitch to Paramount with the Transformers producers, di Bonaventura Pictures, said Epstein, “and we have a variety of film and TV projects at various stages of development.”)

About returning to Studio 58 for Cabaret, Epstein said, “I’ve been talking to Kathryn Shaw [Studio 58 artistic director] for a couple of years about returning to direct something, as I now felt ready, and Cabaret was my first and only choice.”

Epstein said he has a few favourite scenes, ones “that bring tears to my eyes, but none more than a late scene between Herr Schultz and Fraulein Schneider, the older couple that has sweetly fallen in love. None of the characters truly knows what’s coming. Herr Schultz still sees himself as a German and firmly believes he won’t lose anything. It’s heartbreaking.”

Another returning Jewish community member for this production is lighting designer Itai Erdal.

“Studio 58 is one of my favourite places to work,” he told the Independent. “I keep coming back because I love the staff and I love the energy of the young students and because I’ve done some of my best work there. I find it to be a great working environment, which often allows for some real magic to happen.”

Erdal is enjoying lighting Cabaret, which has much darkness in it story-wise, as well as being set in a nightclub.

“Lighting musicals is always tricky but it’s really wonderful to light a musical like Cabaret, just because of that darkness you refer to,” he said. “So many musicals are very lighthearted and it is so refreshing to do a musical about something that matters so much. It’s also some of the best music ever written for theatre, so it’s a joy to light these iconic songs and support these brilliant young actors as they tackle those songs.”

Given that Cabaret is such a well-known musical, Epstein said, “I’m definitely encouraging the team to tell the story that’s written, first and foremost, but any staging or performance that’s been done before, I’m not that interested in repeating. We’re creating something that is unique to Studio 58, their intimate space, and it will be aggressive, fun and stimulating.

“I’m very excited for the fresh performances of Sally and the Emcee in our production,” he added. “I think we’ve found a Sally (Erin Palm) that doesn’t feel sorry for herself, that has strength and power and makes active decisions rather than accepting her lot in life. Our Emcee is female and, after watching how Paige Fraser has done it so far, I would never want it any other way. For one, she dances and sings better than most of the men who have played the role before onstage.

“We’ve also played with the musical numbers,” he said. “‘Mein Herr’ is gonna rip the roof off the theatre and I think we’ve reinvented the pineapple song [‘It Couldn’t Please Me More’].”

The production’s promotional material, which advises that the show is suitable for ages 16+, comes with the warning, “Possible nudity, probable vulgarity and other behaviour your momma won’t approve of!”