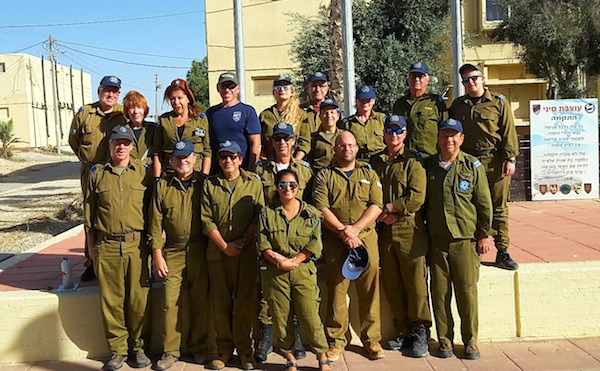 Sar-El volunteers from Canada, the United States, England, Germany and the Caribbean at a base not far from Sderot in 2018. (photo from Ed Rozenberg)

This past July, I found myself shlepping boxes full of medical supplies and loading them onto pallets. How did I get here? I was volunteering in Sar-El, or Sherut LeYisrael, which means “service for Israel.”

Sar-El enables people, both inside and outside Israel, to volunteer to provide assistance to the Israel Defence Forces while contributing to the country, experiencing Israel and integrating into Israeli society. At present, due to COVID-19 and its resulting limitations on visitors, it is rare to meet a non-resident volunteer but, hopefully, that won’t be the case for much longer.

This recent volunteering stint, my wife Ida and I went to a central pickup spot in north Tel Aviv and were taken by bus with the rest of our group to the medical division (Matzrap, which is Hebrew shorthand for Centre for Medical Supplies) of Tel Hashomer, a large army base about 25 minutes away from the city. The usual group has about 15 volunteers, evenly divided between the sexes. Before COVID, the groups would consist of about 25 people, also evenly divided between the sexes, and about 60% Jewish and 40% non-Jewish. My co-workers have ranged in age from 20 to 92.

On arriving at the base, we are taken to our dorm building, with men and women sleeping on separate floors. We are told that there is to be no alcohol, drugs or romantic liaisons. Discussions of religion and politics are strictly forbidden. The group is led by two or three madrichot (female leaders) who are part of an IDF unit trained to lead Sar-El groups. It is important to remember that Sar-El is a unit of the IDF and, while on the base, you are under IDF jurisdiction, which means that you can’t leave the base except with hard-to-get permission. We receive uniforms, which we’re required to wear from the morning till after dinner.

A usual day begins with breakfast at 7 a.m. and the flag-raising at 8:15, followed by the singing of Hatikvah. This is often a very emotional moment, as we volunteers from all over the world are assembled with the same purpose, namely, to do something important for Israel.  I have been on 10 Sar-Els and have met people from Canada, the United States, New Zealand, Australia, many European countries, South Africa, Brazil, Uruguay and Argentina. Volunteering with Sar-El is an extremely broadening experience and you make close friends for life.

Announcements come after the flag-raising. The madrichot ask us if there are any concerns or questions, and take care of them. We are then assigned to our workstations.

The work depends on the type of base. This was my fifth time in Matzrap, which deals with the packing and loading of medical supplies. Other parts of Matzrap deal with checking whether batches of medical equipment, such as stethoscopes, pressure gauges and night vision equipment, are functioning properly, or checking the expiration dates of drugs. The supplies are used in Israel, as well as by emergency units sent abroad to assist in disaster areas.

I first found out about Sar-El in early 2006 from an article in the Jerusalem Report. When the Second Lebanon war broke out, Ida and I flew to Israel and were assigned to a base in the Negev, where we loaded tanks, assembled army equipment, packed uniforms and weapons and loaded food.

One of my favourite activities in Matzrap is to help prepare worktables for adolescents with intellectual challenges. It is fulfilling to see these young people working and getting a feeling of accomplishment. There is always a small thank you ceremony at the end of the work period that I find quite touching. One thing that has struck me since moving to Israel in 2016 is the degree to which people here are encouraged to reach their potential no matter what their background and abilities.

Work continues till lunch at noon. After lunch and a rest period (and, for those who choose to participate, minchah prayers), we return to work till about 4 p.m. Dinner is at 6 p.m. and, at 7 p.m., there is an activity of some sort, either educational or entertaining, or both, such as quizzes, led by the madrichot. The atmosphere is relaxed.

Sar-El itself was the brainchild of General Aharon Davidi (z”l), a former head of the IDF paratrooper and infantry corps. In the summer of 1982, in the midst of the First Lebanon War, Golan Heights communities faced the prospect of losing their entire agricultural crop. The majority of able-bodied farmers and other workers were called up for army reserve duty and entire farms, with crops already ripened, were left unattended.

Davidi was then the director of community and cultural activities of the Golan and Jordan Valley. He sent a number of friends as a recruitment team to the United States and, within a few weeks, some 650 volunteers arrived to help. Those first volunteers expressed the wish that the project be continued. As a result, in the spring of 1983, Sar-El, the National Project for Volunteers for Israel, was founded as a nonprofit, nonpolitical organization. Sar-El is represented in more than 30 countries.

On many occasions, Sar-El volunteers work with soldiers who are assigned to the same workstations. At the beginning, the soldiers are amazed that there are people who actually volunteer for this but, after awhile, they feel more comfortable with the volunteers, they chat with them, get advice from older souls and practise their English.

The lunch on Thursday before the group returns to Tel Aviv can be a quiet time. By then, we have gotten used to one another, laughed, sweated and yelled at one another and many of us have become quite close. The madrichot always set up a WhatsApp group for anyone who wants to join and through which we get our notifications.

I have no doubt that, on balance, I have gotten more from volunteering for Sar-El than from any other contribution that I might have made through volunteering. It has been an enormously enriching experience for both Ida and myself.

Jack Copelovici and his wife, Ida, made aliyah from Toronto in 2016. Sar-El (Sherut LeYisrael) is one of the organizations for which they volunteer. They first volunteered for it in 2006.