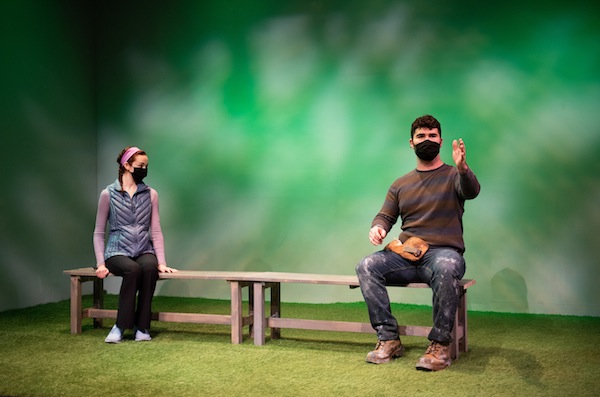 Since COVID-19, we have been learning how to relate to one another from a distance, as well as how to use the technologies, like Zoom, that have allowed us to retain a more personal connection than we could have if we had experienced the pandemic even a handful of years ago. While our reality seems stolen from the script of a futuristic sci-fi horror film, playwright Rosamund Small’s visions of love in the future and how technology affects it, TomorrowLove, are “hilarious, snappy, moving and refreshingly fun in these times,” according to Shekhar Paleja and Lauren Taylor, co-directors of Studio 58’s production of Small’s playlet collection.

Jewish community members Samantha Levy and Katherine Matlashewski are among the cast members of the production, which will be released online on Feb. 28 and available to watch individually or collectively until March 7.

Studio 58 is Langara College’s professional theatre training program, and this spring’s lineup – which TomorrowLove launches – is the first under the direction of Courtenay Dobbie. Both Levy and Matlashewski are in their second year of study.

“I was finishing up my first year when the pandemic began in earnest here,” Levy told the Independent. “COVID-19 has forced me to be more isolated from my school community through Zoom classes, but it has not taken away the care and dedication of my professors, or the support of my peers. We are still a family, even though we are distanced or online.”

It has become a hybrid program since the pandemic, with some classes online and others held in person with social distancing, said Matlashewski. “Since Studio 58 is a hands-on conservatory program, the transition to online studies was challenging at first,” she admitted. “The faculty and staff, however, have been extremely supportive during these uncertain times. They have all worked tirelessly to adapt our training while also prioritizing our safety.

“That being said,” she added, “as a result of COVID, students are now required to commute to and from the college quite a bit … [and] the hours of online Zoom classes are exhausting. Despite these challenges, I appreciate the continuation of our small in-person classes.”

Prior to her post-secondary training at Studio 58, Matlashewski appeared as Mopsy in King Arthur’s Court (Metro Theatre), where she received the Community Theatre Coalition Award for best supporting actress. Other select credits include Alana in Dear Evan Hansen (Laughing Matters), Luisa in The Fantasticks (Stage 43) and Little Red Riding Hood in Into the Woods: In Concert (Royal City Musical Theatre). Most recently, she was awarded the 2021 Cheryl Hutcherson Award by Applause! Musicals Society.

“I have been a part of the Vancouver theatre and dance community from a very young age,” said Matlashewski. “I feel incredibly blessed to live, create and play on the unceded territories of the Musqueam, Squamish and Tsleil-Waututh Nations.”

In TomorrowLove, Matlashewski said, “I have the pleasure of acting in the playlet called Fast Forward, alongside Tanner Zerr. This playlet explores themes of love, abandonment, age difference, time travel and the consequences that come with it.”

Levy plays the role of Jessie in the short play Take This Soul. “In Take This Soul, Jessie’s ex-partner, Rylan, shows up at her doorstep after having disappeared for four days,” explained Levy. “He tells an outlandish tale of an experiment in a distant country that has allowed him to return and present her with his literal soul.”

In addition to this Studio 58 production, Levy’s acting credits include Love, Loss and What I Wore (Centaur Theatre), Fancy Nancy: The Musical (Côte Saint-Luc Dramatic Society, Segal Centre) and It Shoulda Been You (Dora Wasserman Yiddish Theatre, Segal Centre). Her TV and film credits include Annedroids and 18 To Life.

“I’ve been performing since the age of 5, when my parents signed me up for an extracurricular theatre troupe in my hometown, Montreal,” said Levy. “Little did they know that I would fall in love with performing! Since then, I’ve acted on stage and on screen, trained at the Stratford Festival’s Theatre Arts Camp, and dabbled in directing both plays and musicals. Now, I am so thrilled my love of acting has led me to Studio 58!”

But the experience is not what it normally would be, of course.

“During the pandemic, the lovely production team has been working extra hard to keep us all safe,” said Levy, “and that includes managing our schedules closely to avoid contact between folks. So, I have come to value the time I have with others in person even more. When we are in person, we are also wearing masks and social distancing at all times. This often means coming up with innovative new ways to express ourselves without proximity or touch on stage, which has been a wonderful challenge. It is incredibly uplifting for me to have the privilege to be able to continue to create with others, be vulnerable and connect.”

Acknowledging that the “pandemic has been an emotional rollercoaster for everyone,” Matlashewski said, “One of the challenges that I have faced is navigating acting while wearing a mask. Prior to COVID, I did not realize how much I relied on the non-verbal cues and facial expressions of my scene partners. However, now that two-thirds of the human face is covered by a mask, I find that I have to listen more closely to fully understand my scene partner. With that in mind, we all have had to adjust and be patient with ourselves and others.

“My biggest take away from acting during COVID is the importance of human connection,” she continued. “We have had to find new ways to connect and communicate while maintaining physical distancing. During the rehearsal process of Fast Forward, I discovered how social distancing impacted my acting choices. Since I had to maintain a two-metre distance from my scene partner, each movement that I made on stage had to be carefully considered. Our fantastic director, Lauren Taylor, guided us through this process and helped specify our blocking.

“Although we are required to maintain physical distance and wear masks while we are acting, I am thankful that I get to act in person for my first mainstage show at Studio 58.”

Reflecting on her connections to Jewish community and culture, Matlashewski said, “Within Judaism, community is a value that is held with the highest importance. Although we cannot gather in person, I invite you all to find the light where you can and share it with those around you.”

For her part, Levy said, “As my parents are across the country in Montreal and my brother (he’s a doctor!) is in St. John’s, Jewish culture and art are an anchor to the family who love me. Seeing Jewish representation in art is healing and beautiful.”

She then added a “non-performance-related anecdote.”

“I walked into a Jewish bakery during Chanukah to get a few latkes,” said Levy, “and I left with tears in my eyes and a bag full of items I had not planned to buy.”

To see one or all 13 of the TomorrowLove playlets, visit studio58.ca.