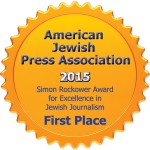 On Sunday, more than 200 adults and children converged on King David High School for the first annual Limmud Vancouver. Limmud is a global phenomenon celebrating Jewish learning and experiences in their most diverse and unexpected forms. Now occurring in scores of cities worldwide, each event is unique and driven by local volunteers.

Vancouver’s first foray into the Limmud experience was not only apparently flawless in execution (with 42 presentations in multiple rooms, with hundreds of participants, any number of things could go wrong – if they did, they were invisible to the average participant) but also as a model of community in its purest sense.

Limmud was brought to Vancouver by Ruth Hess-Dolgin, z”l, whose vision and passion outlives her. After her passing, her dream was taken up by her husband Avi Dolgin and friend Betty Nitkin, who corralled dozens of volunteers to deliver a truly remarkable event. Some community organizations supported it, but Limmud was led, driven and delivered by volunteers acting in no capacity except their dedication to the idea of learning in ways that are “non-denominational, multi-generational and truly transformational.” The buzz around the event was so intense that it sold out weeks in advance, which was perhaps the only disappointment of the day; that so many who would have liked to were unable to attend.

Limmud is founded on a philosophy that everyone is a teacher and everyone is a learner. When they were not presenting on their own topics, presenters were participating in lively sessions with others. Titles – rabbi, doctor, professor – went out the window.

The sessions were as diverse as the attendees. Experiential sessions included Jewish chanting, the music of Uganda’s Jews, and singing along in Yiddish. Ethical and spiritual issues confronted included organ and tissue donation, reflections on the Shema, the Ten Commandments and whether God has gender. Historical themes included religious tolerance in the Middle Ages, klezmer music in early-20th-century Montreal, what caused the death of Jesus, and the Nazis’ policies on reproduction. There was a presentation on how Jews should treat people who transition to Judaism from other religions and Jews who transition from one gender to the other.

In the breaks between sessions, the hallways were filled with traditional and untraditional Jewish musical performances. People were able to unwind in a crafts room. Children were tended but also treated to family-oriented programming of music, art and a session on how to be grateful and what it means.

For those who attended, Limmud provided countless opportunities to reflect on our inner selves, our communities, our world. And perhaps the most important lesson of the day was that this kind of an event does not require the mobilization of organizations and institutions. It was envisioned by a single woman, whose spirit and enthusiasm inspired hundreds of individuals to share her passion for Jewish experiential learning. It was the model of how a single individual, even when she was there only in spirit, could significantly enrich our community.