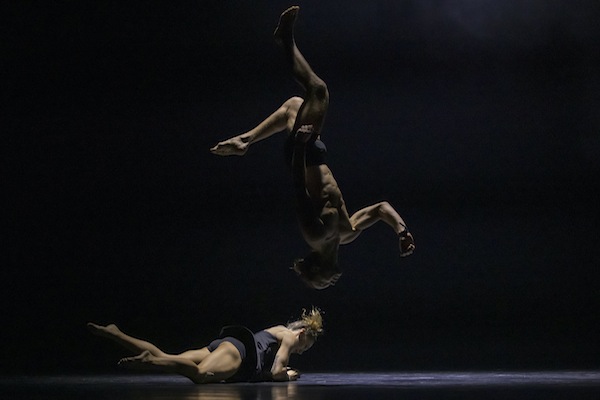 Circa’s Sacre is an exploration of humanity’s interconnectivity, our inherent sexual desire and our complex relationship with divinity. (photo by Pedro Greig)

DanceHouse and the Cultch present the Canadian première of Circa’s acrobatic Sacre, on stage Jan. 17-21, 8 p.m., at the Vancouver Playhouse. Directed by Jewish community member Yaron Lifschitz, artistic director and chief executive officer of Circa, Sacre is an exploration of humanity’s interconnectivity, our inherent sexual desire and our complex relationship with divinity. Inspired by Igor Stravinsky’s seminal production The Rite of Spring, the full-length work from Australia’s leading contemporary circus company is a blend of balletic lines and athletic feats, infused with pulsating and dissonant elements of a reimagined Stravinsky score.

“This is a work of powerful juxtapositions, blending the sacred with the profane; the ethereal with the visceral. On one level, Sacre is a work of mesmerizing beauty, drawing on the lyrical movement of contemporary dance and the intense physicality of the circus arts,” said Jim Smith, artistic and executive director of DanceHouse. “At the same time, the work offers a raw and bracing social commentary, drawing upon the ancient pagan traditions referenced within Stravinsky’s transgressive work – in which a virginal young woman dances herself to death. This offers an intriguing and gritty contrast to the pure spectacle of the performance, and invites reflection on the nature of humanity’s responsibility toward one another in a world on the brink of disaster.”

Stravinsky’s The Rite of Spring was so scandalous that it incited a riot at its Parisian première in 1913. Despite – and partly because of – this incendiary start, the work is now considered one of the most impactful compositions of the 20th century. Circa’s new interpretation of the haunting work premièred in January 2021 at the Illawarra Performing Arts Centre in Wollongong, Australia. Sacre features 10 acrobats interwoven in ceaseless motion, as they deftly move in and out of technically complex grouping structures, lifts, tumbles and leaps.

Set to a pounding musical score by Philippe Bachman, full of fast-paced tempo and mood changes, and echoed by a lighting design by Veronique Benett that moves through intense flashes of light and darkness to dim lighting that slowly brightens, the work methodically builds into a crescendo with heart-pumping intensity.

Circa’s Lifschitz is a graduate of the University of New South Wales, University of Queensland and National Institute of Dramatic Arts (NIDA), where he was the youngest director ever accepted into its graduate director’s course. Since graduating, Lifschitz has directed more than 60 productions throughout his career, including opera, theatre, physical theatre and circus. He was founding artistic director of the Australian Museum’s theatre unit and head tutor in directing at Australian Theatre for Young People, and has been a regular guest tutor in directing at NIDA. He was creative director of Festival 2018: the arts and cultural program of the 21st Commonwealth Games.

Lifschitz has served as artistic director and CEO of Circa, based in Brisbane, since 2004. The company has performed in more than 40 countries across six continents to more than 1.5 million people. Circa has presented at major festivals and venues around the world, including Brooklyn Academy of Music, the Barbican Centre, les Nuits de Fourvière and Chamäleon Theatre Berlin.

For tickets and further information about Sacre, visit dancehouse.ca.

– Courtesy DanceHouse and the Cultch