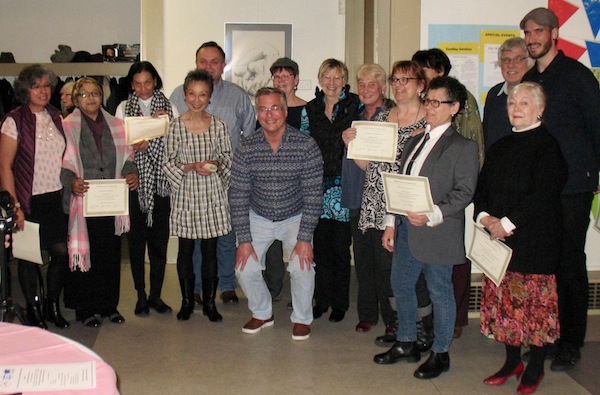 On the evening of March 6, Jewish Seniors Alliance honoured the recent graduates of its peer support counseling training program with the presentation of certificates and a dinner.

Fourteen peer counselors completed the program, which consisted of 14 weeks of training for four hours on Sundays. The certificates were presented by Ken Levitt, president of JSA, and the program’s trainer, Grace Hann, and social worker, Charles Leibovitch. Hann and Leibovitch also serve as support workers for the counselors. They match them with clients and stay involved with their progress and offer help when needed.

Currently, JSA has 100 trained counselors volunteering to help isolated and/or homebound seniors. The counselors are usually seniors themselves and many have impressive education and experience in various fields.

The graduation evening began with Hann and Leibovitch welcoming everyone. This was followed by comments from Levitt and Serge Haber, founder and president emeritus. Three of the graduates – Nancy Bell, Lorraine Drossis and Tessie (Fatima) Rebello – spoke about how much they had learned during the classes. They all mentioned that learning empathy and active listening had contributed to their personal growth. They thanked Hann for her getting them involved and participating in the program and with one another.

Ruby Boychuk, senior peer counselor, offered remarks about seniors helping seniors and Nancy Bennett, another volunteer, was acknowledged for her contributions to the program.

Speakers from the community thanked JSA for the extensive help that its peer counseling offers. Dr. Beverly Pitman of United Way spoke of the significance of the program to the community and emphasized the importance of lobbying the provincial government for more funding. Shelley Rivkin of the Jewish Federation of Greater Vancouver talked about the positive effects of the program and how it corresponded to the Jewish values of tikkun olam (repair of the world). Dorothy Leclair of Burnaby Seniors Outreach continued on the theme of the value of helping seniors and spoke about the Burnaby program.

The final speaker was Kathryn Patterson of Vancouver Coastal Health. She asked the audience to close their eyes and hold hands, then to give one another a hug. It had the effect of relaxing everyone and making them feel as if they knew one another better.

The ceremony and speakers were followed by a buffet dinner, and music and song by David and Julie Ivaz. Many of the graduates got up and danced. As they were leaving, some of the participants remarked that they had had a wonderful evening.

On June 11, I walked into a room filled with givers – of themselves. It was the special occasion of the graduation ceremony of the fifth class of peer counselors, which took place at the Peretz Centre for Secular Jewish Culture.

They were 13 men and women of various ages who had met as strangers and quickly become an extended family of friends. Through 11 weekly five-hour sessions in which interactive role-playing was used, they were taught how to listen, comprehend and use their newly acquired techniques.

Charles Leibovitch, coordinator of peer support services, warmly welcomed those gathered – family and friends of those receiving certificates and members of the board of the Jewish Seniors Alliance of Greater Vancouver. He introduced himself and Grace Hann, trainer and supervisor of the peer counseling program, then credited the founder of JSA, president emeritus Serge Haber, for being instrumental in initiating the program and working diligently to ensure that it thrived through continuous and crucial funding issues to meet the ongoing needs of our growing senior community.

Leah Deslauriers, coordinator of seniors at the Jewish Community Centre of Greater Vancouver, informed the audience of the many and varied activities open to all people (Jewish or not) at the centre for a nominal fee. She encouraged all to visit and partake in yoga, swimming, card playing and just general socializing. Expressing the wish for further partnering with the JSA, she extended a mazel tov to the graduates.

Barb Kirby of Community Resource Network said that, in both a personal and professional capacity, she had seen many gaps in the care of seniors over the years. “One of the greatest gaps we see is lack of support causing social isolation of seniors and that is why your job is so important. Your training and expertise provides a lifeline to those who truly are in greatest need,” she said.

“They say it takes a village to raise a child. I believe it take a village to care for the elderly and it takes a special kind of person to care for the elderly. You are that caring voice or the person sitting next to someone who truly needs a caring human connection or to go one step further to help get the further supports they might need.” One individual, organization or government cannot do it alone, said Kirby. “Speaking up, sharing knowledge and best practices will help make our communities a safer, more enjoyable place for those who need our support.”

She thanked Haber and JSA president Marilyn Berger “for providing all the invaluable services to bring awareness through education and support to our communities.”

Becky Herrmann of Angels There For You noted that people want to be needed, sought after and validated. She recommended the book Give to Live, and said there were no side effects to giving of oneself, urging everyone to try doing so. Larry Shapiro, one of the graduates, countered with, “There are side effects, but no negative ones.” Herrmann later presented each of the graduates with a gift.

Shapiro spoke next, sharing with the audience that, having completed the course, he felt prepared to go out and serve as a counselor. He proceeded to give a little history of peer support counseling in British Columbia, which has been present since the 1980s, addressing social isolation and other daily issues affecting seniors. Shapiro felt the course had taught him empathy, as well as the skills and techniques necessary to offer others methods of self-help.

Fellow graduate Neveen Hossameldin said that, as an immigrant, what one missed most were the friendships left behind, and that she didn’t have another 55 years to forge new ones. Yet, after 55 hours as part of this group, she had indeed made new, lasting friendships. Hossameldin appreciated that Haber had told the class that they were not working for JSA but were part of JSA. Echoing what others had said, she praised Hann for making the sessions pleasurable and warm.

Hann, laughing, said that since Shapiro had stolen a good chunk of her speech, she would just thank JSA and its founder, Haber, who deserved a special tribute for his vision, without which the program would not exist. She underscored that self-absorption kills empathy, that focusing on ourselves makes our world contract whereas giving to others broadens our world.

Leibovitch spoke of the ongoing need for peer support services and of the graduates who go out in the community to help combat the loneliness he sees daily. He said that phone calls to the office are often by those who have been guided by others to use the peer services, and that this essential, relevant help has become very valuable in the community. Karon Shear, coordinator of JSA, and Rita Propp were thanked for their constant commitment to excellence and giving of themselves.

Haber said, “Don’t do unto others what you don’t want others to do unto you,” a teaching found in other religions as well. Giving of yourself – so necessary both to the giver and the receiver – helps to alleviate loneliness, isolation and perhaps even remove the tarnish from the gold quite often present but hidden in the “golden years.” JSA is very proud of this program, he said, adding that he, too, had taken the course to familiarize himself with what was being offered and that he, too, had learned to really listen and hear what was being said. He concluded with the wish that all the graduates would go out and spread good will.

Certificates were handed out along with a rose to each graduate, as was a hug from both Hann and Leibovitch.

Ruby Boychuk, one of the graduates, presented Hann with a bouquet of yellow roses, explaining that yellow roses symbolized love and appreciation.

Family and friends proudly took photos of the celebration, while Stan Shear took a video that will be posted on the JSA website. Refreshments shared by all helped bring the evening to a close, leaving a sweet taste in our mouths and in our hearts. Mazel tov, graduates. Mazel tov, JSA.